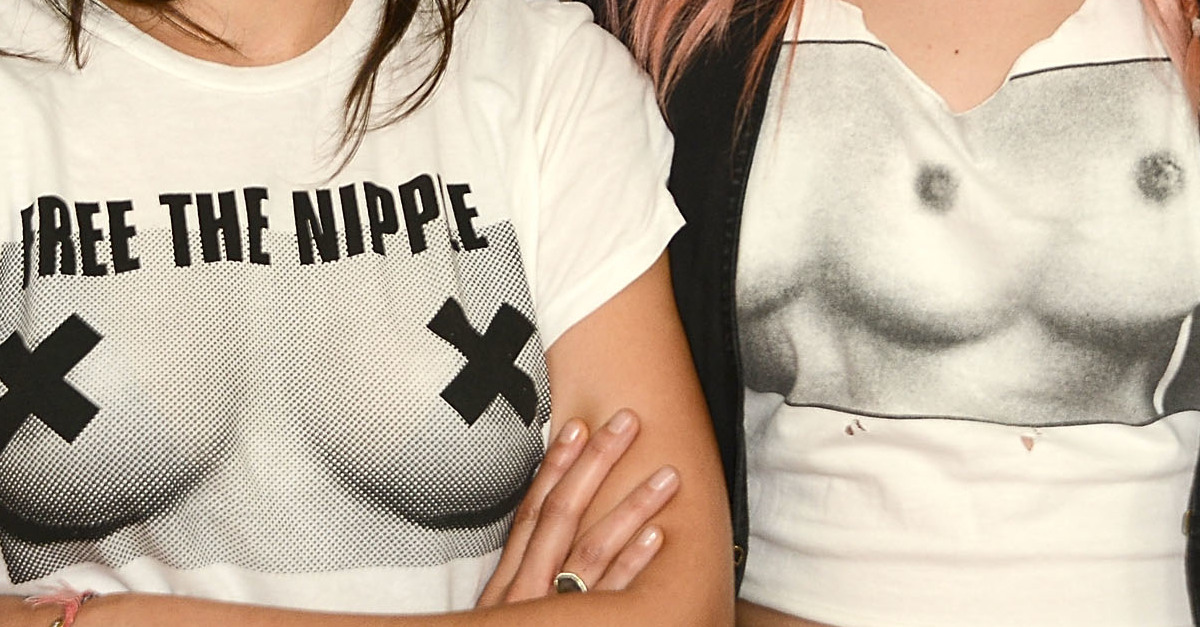 On Monday, the Eighth Circuit handed down a ruling in what’s shaping up to be a circuit-split on the equal protection ramifications of laws against female toplessness. In Free the Nipple v. Springfield Missouri, the court ruled against a group of women who’d violated an indecent exposure ordinance by protesting topless, using only black tape to cover their nipples.

The lawsuit appears to be one grounded in the simple desire to make a public statement. No topless woman has been arrested nor prosecuted under the ordinance, but nonetheless, advocates at Free The Nipple (FTN) sought to have it declared unconstitutional.

Here’s the law (which also includes an exception for breastfeeding) that inspired all the commotion:

(b) “Indecent exposure or conduct” shall include:

(1) The exposure of the male or female genitals, pubic area, or the female breast with less than a fully opaque covering of any part of the areola and nipple, or the showing of the covered male genitals in a discernibly turgid state.

If you’re wondering, “turgid” means, “swollen, or being in a state of distention.” You’re welcome.

FTN argued that because the law explicitly mandates disparate treatment of men and women, it violates the equal protection clause. That argument failed at both the district court and appellate court levels, on the grounds that while the law may raise equal protection concerns, it doesn’t actually violate constitutional guarantees.

Under the equal protection clause, laws that discriminate on the basis of gender (as this ordinance clearly does) are improper, unless they are, “substantially related to an important government interest.” In other words, while we’re very skeptical about laws that treat men and women differently, there is a narrow set of circumstances in which disparate treatment is perfectly legal. So long as the government is serving some legitimate public interest, and the law is closely tied to achieving that interest, it’ll pass constitutional muster.

The City of Springfield prevailed at the district court level on grounds that that the ordinance, while gender-based, was substantially related to the City’s legitimate interest in prohibiting nudity and promoting morality.

The Eighth Circuit’s decision, however, doesn’t mesh too well with things over in Colorado. In February, the Tenth Circuit ruled in favor of Free The Nipple in a nearly identical case.

In Free the Nipple v. City of Fort Collins, another city ordinance outlawing female toplessness was challenged. In that case, though, the Tenth Circuit handed FTN a win that its attorney Andy McNulty called, “a pretty historic moment in the women’s rights movement.”

In the Colorado case, the Tenth Circuit was unconvinced about Fort Collins’s reasons for keeping the ordinance on the books. Noting that the City wasn’t responding to any actual problem of topless women parading around elementary schools, the Tenth Circuit agreed with the district court:

We’re left, as the district court was, to suspect that the City’s professed interest in protecting children derives not from any morphological differences between men’s and women’s breasts but from negative stereotypes depicting women’s breasts, but not men’s breasts, as sex objects.

As a result, the court upheld FTN’s preliminary injunction to stop enforcement of Fort Collins’ ordinance. Finding that the advocacy group’s case is likely to succeed on its merits, the Tenth Circuit rejected the protection of children as a sufficiently important government objective that is substantially served by ban on female toplessness.

The differences in the Eighth and Tenth Circuit approaches mirror the prevailing arguments on the toplessness issue. Some believe that sexualization of only women’s breasts constitutes arbitrary gender-based discrimination easily remedied by enlightened jurisprudence. Others argue that mandatory gender-neutral treatment of toplessness is a misguided attempt at willful blindness toward the reality that men and women are simply different, and that public nudity regulations must mirror those differences.

Will we get to hear the Supreme Court weigh in on freeing the nipple? Maybe. The Tenth Circuit case has not requested SCOTUS review – but that may be because the case is only at the preliminary injunction (and not the final) phase. Should this circuit split lead to more topless drama on the high bench, we’ll be sure to keep you posted.