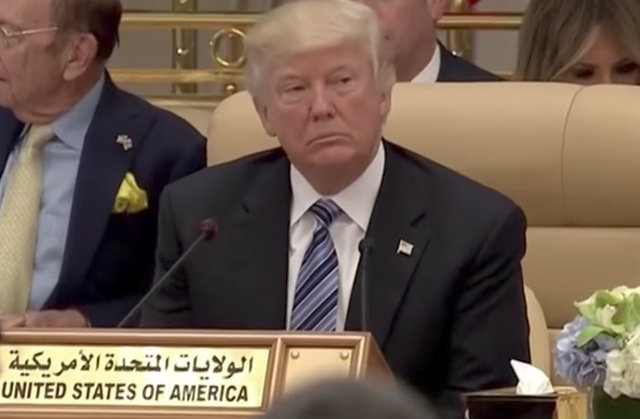 How does Donald Trump go from proposing an outright “Muslim ban” to insisting that this controversial executive order isn’t an attack on Islam? The President’s past comments remain an almost fatal sticking point as this policy affects six Muslim-majority nations. It continues to wind its way through the court system, but perhaps he can turn things around … if he says and does the right things from this point onward.

Trump is currently in the middle of a foreign tour. Sunday brought him to Saudi Arabia, where he addressed King Salman and other Middle East leaders. POTUS insisted the United States was not at war with Muslims. Just terrorists.

Former Republican Senator Rick Santorum quickly suggested that this speech could be used to benefit the travel ban in court.

“It’s going to very hard now to just say, ‘This is a Muslim hater, he hates Islam, he wants to ban Muslims,’” he said on CNN’s State of the Union. “All the Solicitor [General] now has to do now is play parts of that speech, and you’ve now deflected that.”

“The courts considering Trump’s travel ban may be interested in the President’s recent speeches in the Middle East before they decide their cases,” he said. “However, to do that, they will have to ask both sides to file supplemental briefs to put the recent speeches into the appropriate legal context.”

So it’s about how the statements fit into evidence for and against the travel ban. Can government attorneys, through Trump’s recent words and actions, convince judges this policy is constitutional? If they can do that, it would turn around months of nigh-successful resistance in court. The EO’s biggest weakness: Trump’s past comments.

The travel ban faced constant challenge from the moment it was signed on January 27. A federal judge in Brooklyn put a hold on it just the day after, and other lawsuits followed nationwide.

Plaintiffs were often visa holders and lawful residents. Arguments against the policy often claimed it violated the First Amendment’s free exercise clause, and lawyers usually pointed to comments by Trump and surrogates.

He, point-blank, called for an outright Muslim ban during the campaign.

“Donald J. Trump is calling for a total and complete shutdown of Muslims entering the United States until our country’s representatives can figure out what is going on,” said a campaign statement from December 2015. (It was removed in early May.)

Even releasing a new Executive Order in March didn’t stop resistance in court. When federal judges in Hawaii and Maryland recently placed partial holds on the ban, both cited the public statements as the reason behind their ruling.

Since the first travel ban was signed, Trump and his surrogates have emphatically insisted that it is not a religious ban, and that the President is doing this for national security reasons.

The law may give the President leverage here when viewed through that lens. That was the argument from LawNewz.com founder Dan Abrams in January, when he cited the Immigration and Nationality Act. That prohibits discrimination based on nationality, but there’s an exception.

And as a result, you would think, well, that’s pretty straightforward. Except there’s another part of the law, which makes it complicated, which specifically says that the President has the power to suspend the entry of any class of alien found to be detrimental to the interests of the United States, and that’s so broad.

In March, after the federal judges in Maryland and Hawaii implemented their holds, Harvard Law School Professor Emeritus Alan Dershowitz suggested that if the case made it to the Supreme Court, the EO may largely survive depending how justices evaluate it.

“Can you use the words of a Presidential candidate to strike down a law, an order, that would otherwise be constitutional?” Dershowitz said, arguing that a similar ban would be constitutional if passed by President Barack Obama. “That’s going to be a hard sell for the U.S. Supreme Court.”

The government would have an easier time if Justices looked at it in terms of national security instead of religion, he said.

“In the end, if the President just stops talking, this will be sustained on appeal,” Dershowitz said.

For sure, Trump’s mouth is what got him into trouble. As it turns out, however, after this Middle East trip, and a speech that reached out to the Muslim world while denouncing terror, it could also be what gets him out of it. But that depends on how well his government attorneys package his statements in their briefings.