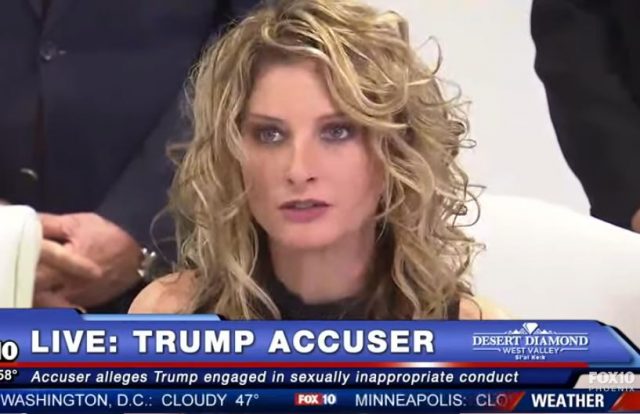 Grab your barf bag, ladies and gentlemen, because Trump’s lawyers have just filed another document in the Summer Zervos case, and it’s a doozy.  You will remember that shortly before the election last year, Zervos came forward and held an emotional press conference in which she gave a detailed account of being sexually harassed and assaulted at the hands of Donald Trump.  Trump responded immediately by calling Zervos a liar and accusing her of fabricating her entire story. Zervos hired Gloria Allred, and filed a defamation suit against Trump — offering to drop that lawsuit any time Trump simply admitted that she hadn’t been lying.   The two remain in a standoff as that defamation suit proceeds through the courts.  Right now, it’s at the motion-to-dismiss phase.  In the president’s Reply Memorandum of Law, Team Trump lays out its major arguments against Zervos’ defamation claim. The short analysis? They’re patently ridiculous and offensive. While I don’t claim to always know what goes on in the minds of judges, the response to this brief is easy to predict.

BRIEF EXCERPT: “Summer Zervos and her counsel, Gloria Allred, continue to press what they have openly proclaimed to be a purely politically-motivated lawsuit.”

WHAT JUDGE IS PROBABLY THINKING: Welcome to the American legal system, you professional purveyors of obfuscation. Here, we don’t care what motivated a lawsuit. We only care whether the claim has merit, and whether sufficient evidence exists to support that claim. Plaintiffs can be motivated by greed, hate, politics, family feuds, or Greek mythology for all we care. All we care about is what your claim is and whether or not the claimant can prove it. Carry on.

BRIEF EXCERPT: “Likewise, as shown (Mem. 23-28), Ms. Zervos cannot hold the President liable for engaging in political speech in the context of a public debate because such speech is clearly protected by the First Amendment. Political statements in political contexts are non-actionable political opinion.”

JUDGE’S THOUGHTS: Okay, so the First Amendment doesn’t quite work that way. You’re clever to bring up the idea of “political speech,” because as we all know, unfettered political discourse was an important underpinning of the First Amendment’s drafting. The problem is, though, that being “political” hardly excuses speech that is otherwise illegal. You don’t get to harass or threaten someone if it’s related to politics. You don’t get to shout “fire” in a political theater. And you don’t get to defame someone, even when there’s an election going on. This is precisely why we test logical principles, such as the difference between necessary and sufficient on the LSAT. Smh.

BRIEF EXCERPT: “Ms. Zervos and her counsel orchestrated a highly-publicized press conference on October 14, 2016 — just weeks before the Presidential election — to make false accusations against the President and thereby oppose his candidacy.”

JUDGE’S THOUGHTS: I see that several times during your motion argument, you criticize Ms. Zervos for publicizing her allegations against President Trump. I get that press conferences can be incredibly inconvenient, especially for someone running for public office, but there’s nothing illegal or even improper about publicizing an impending lawsuit. Plaintiffs and their lawyers hold press conferences all the time, especially when their lawsuits are matters of heightened public interest. Your client can’t seem to keep his own mouth shut for more than fifteen minutes, so I’d consider cooling it with the tattling on Ms. Zervos for speaking out.

BRIEF EXCERPT: “Nor can Ms. Zervos refute the fact that all of the Statements occurred on political forums — a campaign website, on Mr. Trump’s Twitter account, in a presidential debate, and at campaign rallies — where the listeners expect to hear public debate, taken as political opinion rather than a defamatory statement.”

JUDGE’S THOUGHTS: Really? This is your argument? That when your client called Ms. Zervos a liar, it was “a political opinion”? Lemme lay this out for you, counsel. “Political opinions” are things like, “Bernie Sanders would have been a better president,” or “this tax plan is a piece of crap.” They’re not things like, “that woman’s allegations are totally false and she made up all this nonsense about me.” Counsel, I know you’ve been to law school, and I know you took Torts 101, in which you learned the difference between statements of fact and statements of opinion. I know you’re trying here, but this is really going too far. I’m losing my patience here, so wrap it up.

BRIEF EXCERPT: “Courts consistently recognize that Internet postings — particularly on social media like Twitter — are on forums that an audience would understand to contain “‘vigorous expressions of personal opinion,’ ‘rather than the rigorous and comprehensive presentation of factual matter.’”

JUDGE’S THOUGHTS: Guys – and I’m trying to help you here – cut it out with the social media thing. You’re never going to convince anyone that posts would otherwise be defamatory are legal because they’re on Twitter – especially when the tweeter has 41 million followers. Donald Trump isn’t a satire artist or a parody account. He’s the President of the United St, and when he makes statements, even stupid ones, they have meaning. If your client wants to use social media to express his “personal opinions,” tell him to stick to movie reviews. This guy tweets about everything from foreign policy to the death penalty to healthcare law. Twitter is his primary means of communication with the American people, please don’t insult our intelligence by arguing that it somehow doesn’t count.  Look, guys, I know you’re in a tough position right now, what with all the Frank Underwood crossover these days.  But let’s try to keep the legal arguments approaching basic common sense. Thanks.