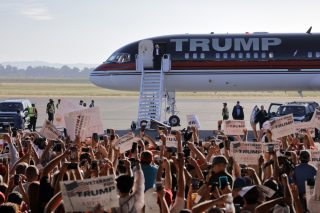 During presidential campaigns, it’s common practice for Secret Service agents to accompany both the Republican and Democratic candidates. It’s also common for the Secret Service to reimburse the campaigns for costs such as the agents’ travel expenses. These numbers add up, as both Donald Trump and Hillary Clinton use private jets to get around. According to a Politico report, FEC documents show that agents have spent $1.6 million to travel with Trump. But Trump owns his airline, TAG Air, Inc., so when the Secret Service pays to travel with The Donald, the taxpayers’ money goes straight to him and his company.

Is Trump taking advantage of the system to drum up business? Sure. Is there anything wrong with that? Nope.

Trump spokeswoman Hope Hicks told Politico that these payments are on the level and they are not violating any rules. “Everything was done in accordance with FEC guidelines and regulations,” she said.

Secret Service spokeswoman Nicole Mainor said the government has to pay the campaign back for these expenses. She said the FEC “specifically requires security personnel such as the Secret Service to reimburse campaigns for seats” on planes.”

It would be one thing if Trump was overcharging the government, and making the American taxpayers spend more on him than they have to, but Politico isn’t alleging that he’s doing that. If the Secret Service has to pay for their flights, does it matter where the money goes? One could argue it’s bad optics, but it really just seems like good business. Trump has to fly and he owns an airline. Why wouldn’t he use it?

Compare that to Hillary Clinton. Clinton takes private jets and the Secret Service has paid a lot more to fly with her. Politico‘s report says that while the government has paid $1.6 million to Trump, they have reimbursed the Clinton campaign for $2.6 million in agents’ travel expenses. Clinton just doesn’t own the companies who provide her planes.

This isn’t exactly the first time that we’ve learned about Trump using his own properties for his campaign. The Politico report said that through August, Trump’s campaign has spent $8.2 million at the candidate’s hotels, offices, restaurants, and other businesses, according to FEC records. Unless he’s overcharging for the flights, I don’t see why this is news.