Trump is Right, the NFL Really Does Get ‘Massive Tax Breaks’ 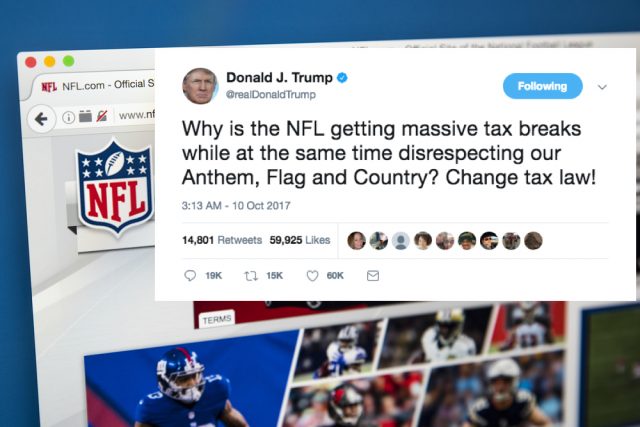 In an early morning tweet, President Trump took aim at the NFL’s ability to avoid taxes. He wrote:

Why is the NFL getting massive tax breaks while at the same time disrespecting our Anthem, Flag and Country? Change tax law!

To answer the president’s question: the NFL is getting “massive tax breaks” because the NFL’s owners have always been good at gaming the system. Political influence doesn’t evaporate overnight and tax subsidies don’t stop when players start taking a knee against police brutality.

But Trump does have a point here. The NFL has been fleecing communities for decades. The way the system is gamed in the NFL’s favor doesn’t lend itself to an easy fix because most of the NFL’s corporate welfare comes from state and local governments. According to ESPN’s Kevin Seifert, the public has gifted nearly $7 billion to the NFL for stadium-building in the past two decades alone.

And that’s just for starters. Here are a few–of many possible–examples:

In Nevada, the public will be giving the Las Vegas Raiders $750 million in order to construct a $1.9 billion, 65,000-seat stadium from scratch. Meanwhile, Clark County, Nevada (where Las Vegas is located) will be raising class sizes for public school students and thereby diminishing the value of their education because officials there were faced with an insurmountable budget shortfall of $14 million–about 1.9 percent of what Nevada plans to give away for a new stadium. And what will the public get out of it? The opportunity to see the Raiders play? Not likely. NFL tickets are frequently priced out of most people’s budgets.

Jerry Jones has successfully bilked Texans out hundreds of millions of dollars over the course of his storied tenure as owner of the Dallas Cowboys. The City of Arlington technically owns AT&T Stadium and floated over $300 million worth of municipal bonds (which will cost close to $600 million when all paid off) in order to foot the bill for roughly half of the stadium’s construction. Jones pays the city $2.5 million per year in rent and naming rights–while raking in the stadium’s profits for himself–but because the city is only renting the stadium to Jones, he avoids the property tax bill for AT&T Stadium. That bill would otherwise be in excess of $6 million per year. Instead, Tarrant County makes up the difference by passing that missed revenue onto the public. How ’bout them Cowboys?

In Santa Clara, California the 49ers recently opened a shiny, new, and mostly-empty stadium named after famous jeans. The price tag for that boondoggle was a modest $1.3 billion. The public knew they were getting taken for $116 million, but predictably Californians couldn’t have cared less when presented with the option of trading in public funds for something new, huge and useless. But that was just on paper. In reality, a new municipal authority had to be created, the Santa Clara Stadium Authority. This authority’s job was to borrow nearly $1 billion from a Goldman Sachs consortium in order to cover most of the “private” financing for the stadium. This deal was inked not too long ago, but there’s already indications that Santa Clara has been fleeced–apparently the 49ers aren’t making their obligated payments.

All this for what? Stalwart swamp-minded individuals are keen to rave on and on about the economic benefits that publicly-subsidized, privately-profitable stadiums bring to their communities. But those people are wrong–they’re probably just been dazzled by all the lights and parking lots. A study released by the Brookings Institution found such claims are often incorrect. The authors note:

And, of course, this is just a brief discussion of subsidies. Consider for a second how municipal bonds–the source of the above-mentioned subsidies–are exempt from federal income tax. There’s another gift to the NFL’s ultra-wealthy owners and their affiliated corporations–the milkshake being sucked out of the public’s money by the ever-winding straws of political influence.

Then consider some of the rest of it: infrastructure cities are forced to build (or forego), generally misallocated public funds (such as the education example in Las Vegas referenced above), economic opportunity grants (slush funds in miniature for the locally well-connected), the much ballyhooed millions spent by the Department of Defense on patriotic propaganda (the entire reason the national anthem at games is even a thing), and the NFL’s waiver from anti-trust laws (in the realm of broadcasting).

For once, more or less, Trump is correct in his estimation of the American institution known as the NFL. For far too long we’ve spelled “priorities” with the letters: “S-P-O-R-T-S” and it’s high time we changed that.