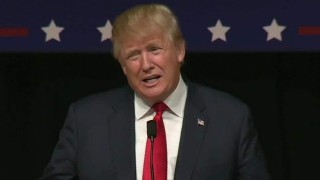 In his, shall we say, ‘defeat’ statement following his Wisconsin loss, Donald Trump leveled some pretty heavy accusations at his opponent, Ted Cruz. This time, he’s accusing the Republican presidential hopeful of flat-out violating election law.

In a statement, Trump’s campaign said, in part:

Not only was he (Cruz) propelled by the anti-Trump Super PAC’s spending countless millions of dollars on false advertising against Mr. Trump, but he was coordinating with his own Super PAC’s (which is illegal) who totally control him.

According to opensecrets.org, there are 12 pro-Ted Cruz super PACs (independent-expenditure only committees) that have raised millions of dollars.  A group called Keep The Promise III has raised the most funds at over $16.5 million. However, to date, we have no evidence that Cruz openly coordinated with these groups, but that doesn’t mean it hasn’t happened. The rules on what counts as coordination are a bit murky.

By way of background, super PACs were created in the aftermath of the 2010 Citizens United Supreme Court decision , and they are supposed to operate independently of candidates. They can raise unlimited funds from individuals, companies or groups.  Interestingly, back in July, as Buzzfeed noted, Cruz uploaded hours of footage featuring interviews with his wife Heidi and other supporters. Candidates can do this so that super PACs can use the footage in ads. Candidates are prohibited from directly filming ads for particular super PACs but this is kind of a legal work around, so to speak. Under FEC rules, candidates are prohibited from having any meaningful discussions with super PACS about how money will be spent. When it comes to super PACs coordinating with candidates, as a recent Harvard Law Review article point out, the rules can get muddy.

Why would it be hard for Trump to prove Cruz illegally coordinated with these super PACs? For one, candidates are allowed to participate in fundraising efforts. They just can’t have a say on how the money is spent.  So, Cruz could say he was just showing up at an event to help raise funds, not telling the group how to target Trump. For more on the rules about coordinating, check out the FEC’s brochure. We have reached out to the Federal Election Commission to see if they are investigating, or if any complaints against Cruz have been filed. Cruz’s campaign has not yet responded to the allegations.