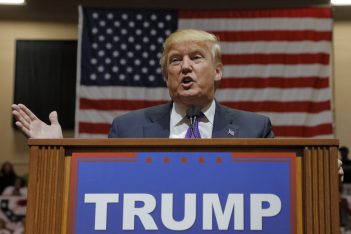 The Trump campaign released a strongly worded statement on Monday in response to reports of a financial connection between top Clinton ally Terry McAuliffe’s political organization and the wife of a top FBI official who helped oversee the Clinton email investigation.

On Sunday night, the Wall Street Journal reported McAuliffe’s political action committee gave nearly $500,000 to the election campaign of Dr. Jill McCabe in her failed effort to win a seat in the Virginia state senate in 2015.  Dr. McCabe was reportedly recruited by Gov. McAuliffe and other state Democratic Party officials to run for the seat.  Her husband, Andrew McCabe, was serving as an associate director of the FBI during the state senate campaign.  He was later promoted to deputy director of the FBI and assumed an oversight role in the Clinton email investigation.

According to the report, McCabe sought ethics advice from the FBI and “played no role, attended no events, and did not participate in fundraising or support of any kind” for his wife’s campaign.  The FBI also determined there was no conflict of interest with McCabe’s oversight of the email investigation because his wife’s campaign had before his promotion.

A spokesperson for Gov. McAuliffe issued a statement saying the governor “supported Jill McCabe because he believed she would be a good state senator. This is a customary practice for Virginia governors… Any insinuation that his support was tied to anything other than his desire to elect candidates who would help pass his agenda is ridiculous.”

A Trump campaign spokesman, however, issued a blistering statement in response to the report on Monday morning.

“Last night’s revelation that close Clinton ally Terry McAuliffe authorized $675,000 to the wife of a top official at the FBI, who conveniently was promoted to deputy director, and helped oversee the investigation into Clinton’s secret server is deeply disturbing and calls into question the entire investigation,” Trump senior communications advisor Jason Miller said in a statement obtained by LawNewz.com.  “The fact that this was allowed to occur shows either outright negligent behavior by the FBI or a level of corruption that is beyond belief. The FBI needs to fully address these issues as soon as possible.”