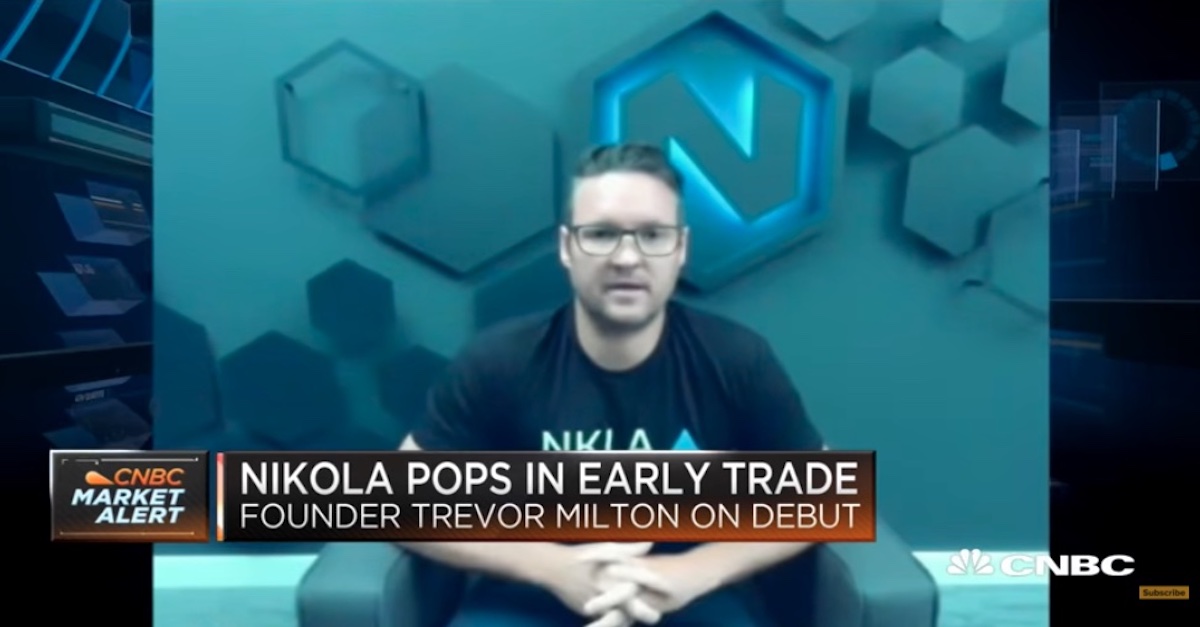 Tech entrepreneur Trevor Milton, whose start-up Nikola aimed to mainstream the use of battery- and hydrogen-powered trucks, faces multiple criminal charges after allegedly misleading investors as to the actual functionality of Nikola products.

Milton, 39, is charged with two counts of securities fraud and one count of wire fraud.

According to prosecutors, Milton “engaged in a scheme to defraud investors by inducing them to purchase shares of Nikola Corporation … through false and misleading statements regarding Nikola’s product and technology development,” the U.S. Attorney’s Office for the Southern District of New York said in a press release Thursday.

Among those investors, according to the DOJ, were people who were new to the stock market and had “begun trading during the COVID-19 pandemic to replace or supplement lost income or to occupy their time while in lockdown[.]”

“[S]ome of the retail investors that Milton’s fraudulent scheme targeted suffered tens and even hundreds of thousands of dollars in losses, including, in certain cases, the loss of their retirement savings or funds that they had borrowed to invest in Nikola,” the DOJ said.

In one example, during a 2016 highly-publicized unveiling of a prototype “Nikola One” truck, Milton presented the truck “fully functioning,” but it actually didn’t work at all. According to the DOJ, the truck was missing “significant parts,” including gears and motors; the control system was incomplete; and the “infotainment system” was actually just tablet computers or other screens mounted to areas where the system would be, “and the screens were set to display images created to have the appearance of infotainment screens, with speedometers, maps, and other information displayed,” the DOJ said.

In 2018, Milton had Nikola publish a video on Twitter that appeared to show the Nikola One driving on its own power down a road with no incline. In reality, the truck was towed to the top of a hill, at which point the “driver” released the brakes, and the truck “rolled down the hill until being brought to a stop,” according to the DOJ.

Milton also allegedly misled investors by claiming that Nikola’s electric pickup truck, called the Badger, was built from the “ground up,” when in fact it used chasses and bodies from Ford F-150 pickup trucks in its Badger prototypes.

“At Milton’s direction and with his approval, engineers working on the Badger prototypes took steps to hide from the public that Ford donor vehicles were used to produce the prototypes,” the DOJ statement said.

Milton made false and misleading claims “regarding nearly all aspects of Nikola’s business,” the DOJ said, including statements that Nikola was producing hydrogen at a reduced cost, when in fact Milton knew Nikola wasn’t producing any hydrogen at all; that Nikola was developing batteries and other components in-house, when Milton knew the company was acquiring them from third parties; and that reservations made for future deliveries of Nikola’s semi-trucks were binding orders representing billions in revenue, “when the vast majority of those orders could be cancelled at any time or were for a truck Nikola had no intent to produce in the near-term.”

According to the complaint, Milton also pledged that the Badger truck would have a “drinking fountain … using the hydrogen bi product water for the drivers to have nice cold, clean, pure drinking water.” Milton hadn’t discussed this issue with Nikola engineers to see if it was even possible, and, as the complaint says, a few days later Milton did an internet search for “can you drink water from a fuel cell?”

As Milton was lying to investors and the general public, prosecutors say, he was also enriching himself. By taking advantage of going public by merging with a Special Purpose Acquisition Company (“SPAC”) in June 2020, Milton made many of his claims “during a period where he would not have been allowed to make public statements under rules that govern IPOs,” the DOJ said. After the merger, Milton owned enough shares to represent just over 25% of the company, for a value of around $3.1 billion.

Milton surrendered himself to authorities Thursday morning, and had a hearing set before a magistrate on Thursday afternoon.

“As alleged, Trevor Milton brazenly and repeatedly used social media, and appearances and interviews on television, podcasts, and in print, to make false and misleading claims about the status of Nikola’s trucks and technology,” federal prosecutor Audrey Strauss said in the DOJ’s statement. “But today’s criminal charges against Milton are where the rubber meets the road, and he now will be held accountable for his allegedly false and misleading statements to investors.”

The Securities and Exchange Commission also filed a civil complaint against Milton on Thursday, alleging that he attempted to defraud investors about Nikola’s products.

“Milton did so primarily by leveraging his social media presence and frequent appearances on television and podcasts to flood the market with false and misleading information about Nikola,” the civil complaint says. “Milton sold a version of Nikola not as it was – an early stage company with a novel idea to commercialize yet-to-be proven products and technology – but rather as a trail-blazing company that had already achieved many groundbreaking and game-changing milestones.”

Milton left Nikola in September 2020 following a report from Hindenberg Research that accused Milton of making “dozens of false statements” on which Nikola was built. In a statement, Nikola was quick to distance itself from its founder.

“Trevor Milton resigned from Nikola on September 20, 2020 and has not been involved in the company’s operations or communications since that time,” a spokesperson for the company said in a statement. “Today’s government actions are against Mr. Milton individually, and not against the company. Nikola has cooperated with the government throughout the course of its inquiry. We remain committed to our previously announced milestones and timelines and are focused on delivering Nikola Tre battery-electric trucks later this year from the company’s manufacturing facilities.”

Read the indictment and the SEC complaint, below.