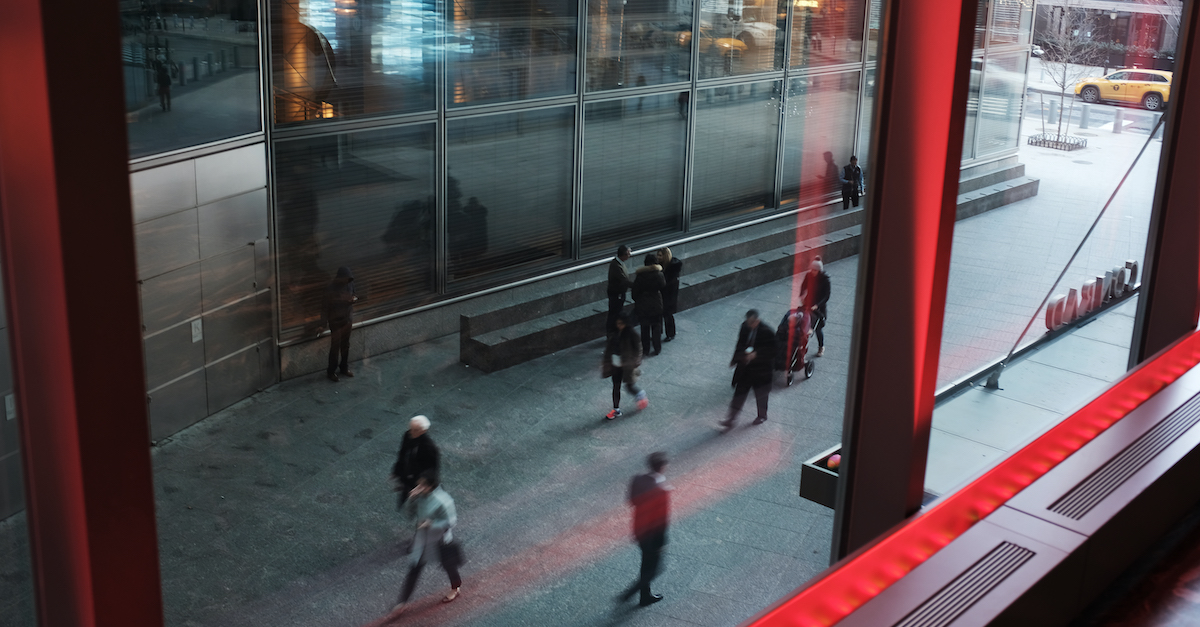 People walk outside of the Goldman Sachs Manhattan headquarters on December 17, 2018 in New York City.

Top lawyers at elite global financial firm Goldman Sachs attempted to coverup allegations of sexual misconduct in the workplace committed by the bank’s global head of litigation, according to a lawsuit filed Monday with the New York State Supreme Court.

According to the 31-page complaint obtained by Law&Crime, former Sullivan & Cromwell partner Darrell Cafasso used his “position of substantial power” at Goldman to “romantically prey upon a much younger and vulnerable female colleague” who reported to him.

“Cafasso knew this Jane Doe would be susceptible to his advances and targeted her for that reason – Jane Doe knew her performance needed improvement, she was dealing with difficult personal matters outside of work, and Mr. Cafasso would exacerbate these matters through encouraging her to drink alcohol during private offsite meetings,” the lawsuit alleges. “Mr. Cafasso is well known to engage in excessive binge drinking at work-related functions, in violation of Goldman’s policies.”

The complaint continues on to document the unstable environment Cafasso’s alleged advances created [emphasis in original]:

Mr. Cafasso became so infatuated with Jane Doe and securing her affections that, even though he had only known her for a brief period of time, he made declarations of love to her as follows: “I have feelings for you I have never had for anyone else but my wife” “I have these feelings for you,” and “I think I’m falling in love with you” – and these statements were not reciprocated. Mr. Cafasso’s obsession with Jane Doe grew so strong that he even blamed her for his misconduct, telling her “You’re a temptress” and “You’re the Devil’s pawn.” Mr. Cafasso was not even subtle about using his position of power to advance his misconduct, promising his subordinate job benefits if she would “return the favor.”

“Predictably, Mr. Cafasso’s harassment create an untenable situation for this female employee who was not interested in the form of attention Mr. Cafasso was providing and did not share his intentions,” the lawsuit goes on.

Cafasso’s wife learned of his alleged overtures to Doe and he was eventually forced to “come clean” to Goldman’s General Counsel Karen Seymour, which apparently only made matters worse.

“Rather than address the situation appropriately and engage in remedial discipline – including termination – for engaging in such unacceptable conduct and horrific judgment, she did the opposite,” the filing alleges.

An investigation conducted by outside counsel was little more than an attempt to “sweep it under the rug,” the lawsuit claims before accusing Seymour of telling “another senior lawyer” that Doe’s allegations were a “sticky situation.” Seymour allegedly told this other attorney: “Let’s try to put this genie back in the bottle.”

Doe, however, is not the plaintiff in the lawsuit filed Monday by attorneys with Wigdor LLP.

Plaintiff Marla Crawford is an attorney who previously worked as Goldman’s assistant general counsel for a decade before the Cafasso-Doe affair.

“Crawford, who was a confidant of Mr. Cafasso’s victim and who would have been an obvious person to interview, was never approached for information,” the lawsuit contends. “In fact, when Ms. Crawford attempted to tell a senior Human Capital Management member that she had relevant information and was surprised she was never interviewed, the response was that she should keep her mouth shut, not speak about the matter and she was never questioned further.”

Crawford said the following in a statement: “As a lawyer and professional, I always try to stand up for what is right. Unfortunately for Goldman’s top lawyers, that made me a liability. I will hold Goldman and its senior lawyers accountable for the blatant retaliation perpetrated against me.”

The outside counsel’s investigation concluded roughly two weeks later and Cafasso was given a clean bill by attorneys with Weil Gotshal & Manges LLP. Prior to that, the lawsuit claims, the global litigation head began a retaliation campaign against Crawford–a campaign which he allegedly restarted in earnest after his return.

The lawsuit alleged what happened next [emphasis in original]:

[W]hen Ms. Crawford complained about Mr. Cafasso’s conduct she was immediately subject to blatant retaliation. Before he was placed on leave, Mr. Cafasso lowered Ms. Crawford’s quartile score (an internal metric used at Goldman) and at the same time raised the score for the women for whom he had sexual desires – again, hoping for her to “return the favor” as a quid pro quo. After he returned, and directly after Ms. Crawford raised her complaints, he gave Ms. Crawford negative comments on her previously finalized review.

Crawford, in turn, complained through the proper channels and an internal investigation absolved Cafasso of any wrongdoing.

After that, Crawford alleges, she was boxed out, her bonus was cut “for the first time in her tenure” and she was eventually fired.

Per the complaint’s introduction:

This is an action about the most senior in-house lawyers at The Goldman Sachs Group, Inc. – Karen Seymour, Esq. and Darrell Cafasso, Esq. – completely disregarding their legal and ethical obligations and permitting a workplace where sexual harassment is covered up and the powerful are cloaked with immunity. Ms. Crawford – an Associate General Counsel – attempted to speak up about misconduct – perpetrated by Mr. Cafasso – but the result was a broadside attack on her performance and then terminating her after more than 10 years of exemplary performance. The conduct at issue here calls into doubt all internal investigations done at Goldman and demonstrates that the Bank and its senior leaders are only concerned with protecting themselves and their executives, not the employees.

Crawford’s lawyers said the complaint illustrates that top Goldman Sachs lawyers tried to silence and retaliate against those who dared to expose sexual harassment.

“Senior lawyers at Goldman Sachs should know better than to engage in sexual harassment, cover-ups and blatant retaliation against those who have the courage to speak up,” said attorneys Douglas Wigdor and David Gottlieb. “Given these allegations, it should come as no surprise that Goldman has been referred to as the villain of Wall Street.”

Law&Crime reached out to Goldman Sachs for comment on this story but no response was forthcoming at the time of publication.