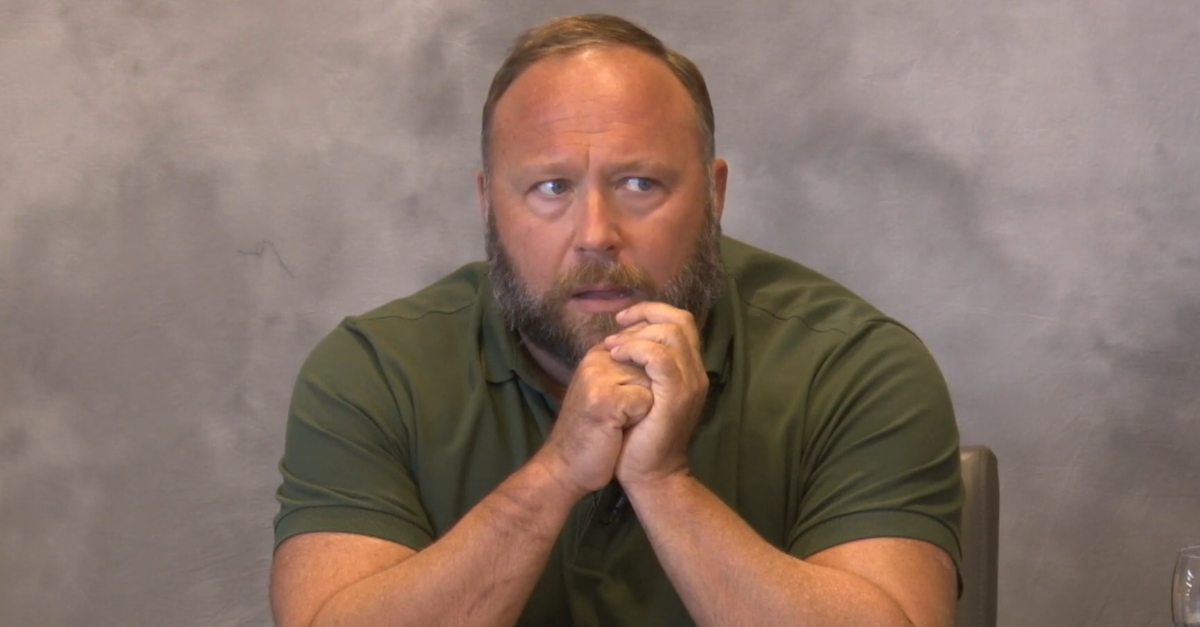 Attorneys representing Sandy Hook families in a defamation case against InfoWars host Alex Jones accused the defendant of sending electronic files containing child pornography as part of the discovery process and threatening one of the plaintiffs’ attorneys. Although the defense said federal prosecutors told them there was “no indication anyone at InfoWars knowingly possessed child pornography,” the judge in the case was otherwise not convinced on Tuesday with the explanation for an alleged threat related to this controversy.

Norm Pattis, an attorney for Jones, apologized on Tuesday for a segment last Friday on Jones’s InfoWars show in which Jones transparently lashed out and identified an opposing attorney by name and face. In the segment, Jones identified attorney Chris Mattei by name and showed a picture of him, punching said picture. According to the plaintiffs, Jones “falsely claim[ed] that Attorney Mattei tried to frame Jones by planting child pornography in discovery materials produced by Jones, distorting what actually occurred in the discovery process in this case, and threatening Attorney Mattei and the Koskoff firm.”

“A party produced child pornography in their discovery documents and then went on a broadcast and said the child pornography was planted by the plaintiffs’ attorney,” the judge said. Bellis also tacked on sanctions, calling Jones’s remarks “indefensible,” “unconscionable” and “possibly criminal.”

Bellis barred Jones’s team from pursuing special motions to dismiss, according to CNN. Jones will also have to compensate the plaintiffs with attorneys fees for forcing their hand in filing a motion on this issue.

As mentioned, the allegations that Jones threatened Mattei stemmed from last Friday’s episode of Jones’ show.

“We all know who did it,” Jones said, during a profanity laden tirade.

“Mr. Jones was upset, he did not threaten Mr. Mattei,” Pattis said. “He spoke in a compassionate fashion.”

“I spoke to federal prosecutors last week,” Pattis said. “They report that there is no indication anyone at InfoWars knowingly possessed child pornography. The items were embedded in emails sent to folks at InfoWars without ever having been opened.”

Jones previously had to sit for a deposition about Sandy Hook Elementary School conspiracy theories. The plaintiffs, families of five children and two adults who were murdered in Newtown, Connecticut, sued Jones for defamation due to his “years-long campaign of abusive and outrageous false statements in which Jones and the other defendants have developed, amplified and perpetuated claims that the Sandy Hook massacre was staged and that the 26 families who lost loved ones that day are paid actors who faked their relatives’ deaths.