What Is Surefire Intelligence? | Law & Crime 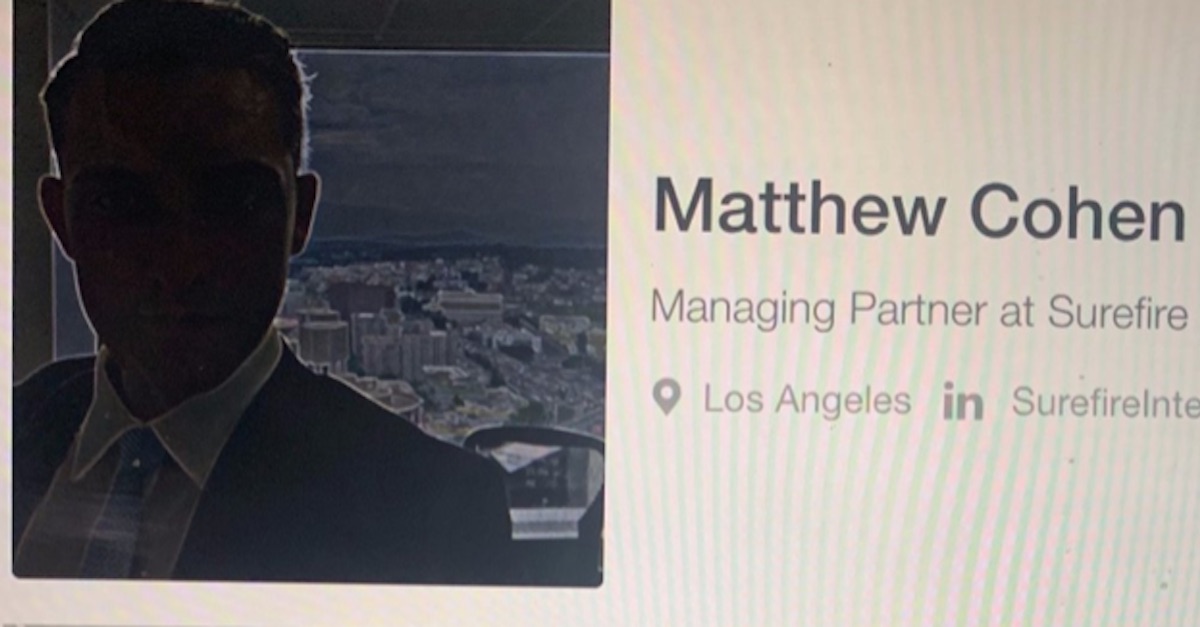 One of the weirdest stories to come down the pike in some time involves right-wing conspiracy theorist and radio host Jack Burkman and 20-year-old hedge fund owner and Donald Trump supporter Jacob Wohl banding together to discredit special counsel Robert Mueller with allegations of sexual assault. Linking Burkman and Wohl to one another didn’t take too long — and, Surefire Intelligence, a “private intel agency that designs and executes bespoke solutions for businesses and individuals who face complex challenges,” had everything to do with that.

The whispers that allegations would enter the mainstream turned into shouts, as Burkman posted a video teasing a Thursday press conference where he would “reveal the first of Special Counsel Robert Mueller’s sex assault victims.” That press conference did take place today, but no accuser came forward.

So, what part does Surefire Intelligence play in all of this? On Oct. 30,  the same day the rumors started swirling, Wohl said that “several media sources” told him the story would break.

Several media sources tell me that a scandalous story about Mueller is breaking tomorrow. Should be interesting. Stay tuned!

Also on the same day, the accusations were published on the right-wing fringe site Gateway Pundit and it was revealed that this private investigation firm, Surefire Intelligence, was investigating claims of sexual assault. The Surefire Intelligence Twitter account, which was created in April 2018, also had something to say on social media in response to a “flurry of press inquiries.”

PUBLIC STATEMENT IN RESPONSE TO A FLURRY OF PRESS INQUIRIES: Surefire Intelligence does not comment on current, past or future operations, nor
the lack thereof. Our firm assists businesses and individuals with complex and sensitive matters, many of which are (1/2)

confidential under attorney-client privilege. Finally, Surefire Intelligence always conducts itself well within the limits of legal and ethical standards and categorically denies and rejects any claims that suggest otherwise. (2/2)

“I don’t have any involvement in any investigations of any kind. I’m not quite that cool,” he said — even thought Burkman had already admitted Wohl’s involvement elsewhere.

Not only was it discovered that an email address with Wohl’s name on it ([email protected] )was linked to the domain registration of Surefire Intelligence, profiles for purported employees of the firm were transparently fictitious. Managing partner “Matthew Cohen‘s” profile featured a picture that was quickly found to be a photo of Wohl.

Odd. Jacob Wohl says he doesn't know nuttin' about Surefire Intelligence, the firm tied to the bizarre Mueller allegations. Take a look at the photos below of Mathhew Cohen, head of 'Surefire,' and of Jacob Wohl. pic.twitter.com/Q1rAW4wkPO

Aric Toler wrote the most comprehensive story on how Surefire Intelligence was traced to Wohl.

Then there was the detail that the phone number listed on the Surefire Intelligence website redirected to voicemail — Wohl’s mom’s voicemail.

A company called “Surefire Intelligence” has ties to this Mueller smear.

Eventually Wohl would stop denying his involvement. On Thursday, Wohl made an appearance alongside Burkman at a Holiday Inn in Rosslyn, Va. They scheduled this press conference, saying the Mueller accuser(s) would be revealed. There was not a big reveal, but Burkman defended Wohl in an … interesting way.

The Q&A is getting heated! Jacob Burkman defends Jacob Wohl's age: "Jacob is a child prodigy who has eclipsed Mozart."

Burkman and Wohl claimed that the woman would not appear at the presser because she was “fearful for her life.”

Update: after Jacob Wohl and Jack Burkman claimed over and over that their Mueller accuser would be there, they now say the woman won't be at the event because she's "fearful for her life." pic.twitter.com/Um6vlvzsFk

Gateway Pundit has also clarified that, actually, the initial story of allegations against Mueller that was published on the website “was authored by Jacob Wohl himself” and posted there directly by Wohl. Wohl was also identified in that Gateway Pundit “exclusive” as a “journalist and founder of Sure Fire Intelligence.”

Nonetheless, Wohl claimed, the accuser “gave us her story. She went point by point. She gave us time, she gave us dates. We carefully vetted that story. We wrote it into an affidavit, which she has signed. She also has a corroborating witness.”

There was still some question, however, about whether Burkman and Wohl were able to spell their client’s first name.

Burkman and Wohl appear to have no idea how to spell their client's first name. They insist it's Carolyn — but then after reporters ask them, they say it's Carolyne with an E.