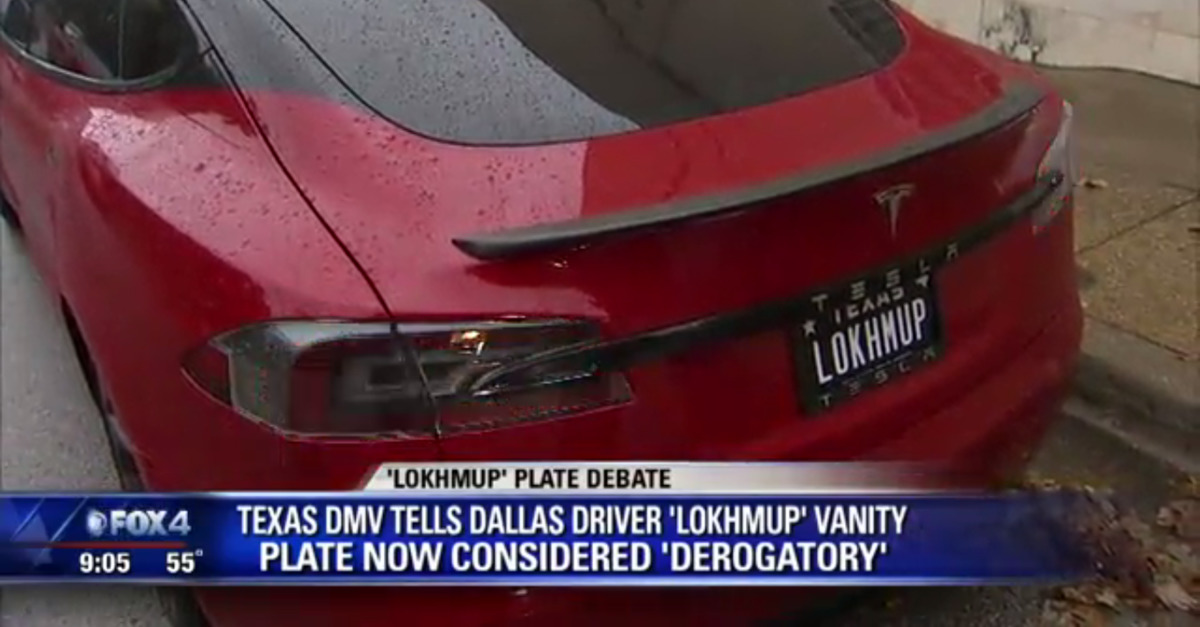 A man in Texas will be forced to change his anti-Trump vanity plate after the state’s Department of Motor Vehicles (DMV) determined the plate contains a “derogatory” message.

Bill Moore is a Dallas resident who purchased a personalized classic black license plate featuring the phrase, “LOKHMUP,” a variation on President Donald Trump‘s famous campaign slogan originally referencing Hillary Clinton–but which is now regularly trotted out to refer to anyone deemed a worthwhile political opponent by Trump and his erstwhile supporters.

According to the Dallas Morning News, Moore got the idea for his plate after the 2016 election when allegations arose that Trump and/or members of his presidential campaign had unlawfully engaged in conspiracy or collusion with the Russian government. Moore originally registered his vanity plate in March 2017 and renewed the same “LOKHMUP” phrase in March of this year.

According to the local Fox affiliate KDFW-4, someone recently called and complained about Moore’s vanity plate and the Texas DMV agreed. This week, Moore received notice that the DMV had “recently received a complaint” and said the plate would be canceled because it “may be viewed as derogatory.”

Moore will now have to choose another phrase for his vanity plate.

In comments to KDFW, Moore said:

So he can say ‘Lock her up,’ but I can’t say ‘Lock him up’? I don’t understand the difference.

Moore also noted that he was simply expressing himself and had typically received a favorable response from members of his community.

“I want people to know how I feel. I feel like he should be locked up,” Moore said. “I’ll be at a red light and someone will come by and tell me to roll my window down and they’ll say, ‘Thumbs up for your license plate.’”

The problem, according to the Texas DMV, isn’t that Moore is expressing a political message, but that his message is considered “derogatory” by the agency’s official censor. The Lone Star State DMV’s code offers the following definition of that term:

[A]n expression that is demeaning to, belittles, or disparages any person, group, race, ethnicity, nationality, gender, sexual orientation, or refers to an organization that advocates such expressions.

KDFW also reported that, when questioned, the Texas DMV confirmed the plate “LOKHRUP” would be considered “derogatory” as well.

Moore, for his part, plans to appeal the decision.

“I’m not inciting violence,” he said. “It’s just my thoughts that he is a criminal and he needs to be locked up, just like at his rallies when he says that all these other people are criminals and they should be locked up. It’s the same difference, only no one controls him. But yet I’m a citizen being told that I can’t do the same thing.”

The Tesla driver says this is an issue implicating the First Amendment’s guarantee of Freedom of Speech.

“We can’t let the government slowly chip away at our rights,” Moore said.

The Supreme Court has previously ruled, however, in another case involving the Texas DMV, that states can easily censor license plates because they are effectively government speech.