‘The Child’s Arm Was Still in the Pen’: Grandparents’ Pit Bull Rips Off Arm of 4-Year-Old Oklahoma Boy 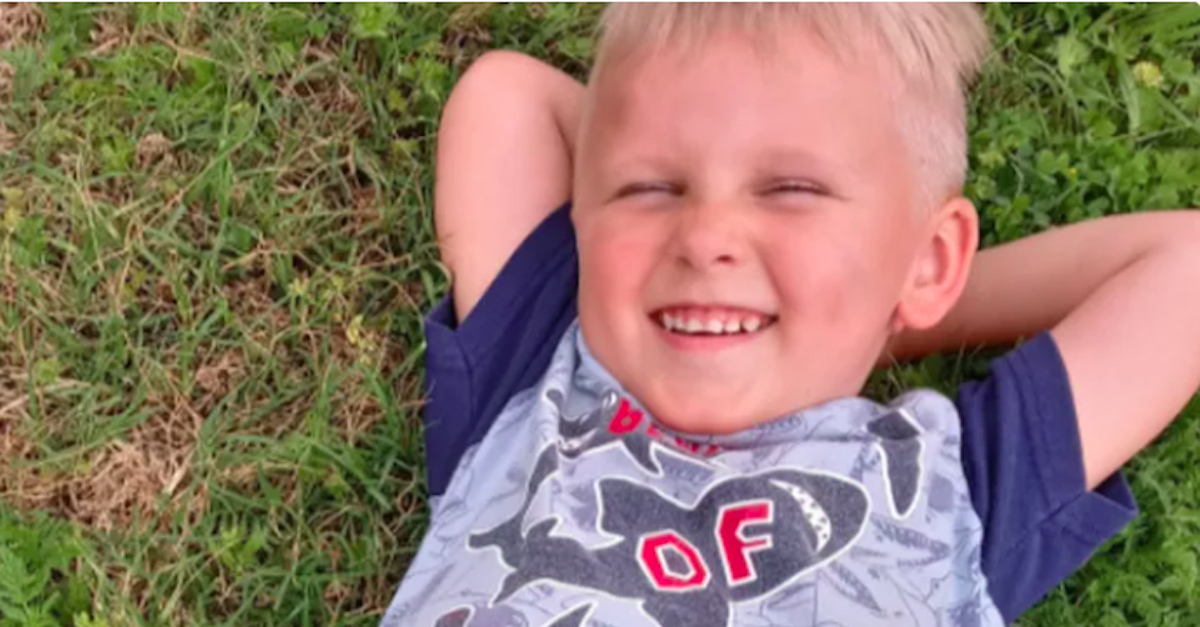 A 4-year-old boy in Oklahoma is fighting for his life, police say, after a pit bull belonging to his paternal grandparents attacked him and ripped his arm completely off just below the shoulder.

The child, who was identified as Axel Foster, is currently in critical condition and hooked up to breathing and feeding tubes after doctors were unable to reattach his arm, according to his mother, Destiny McDow.

The incident, which was first reported by took place on Friday, Dec. 10.

Officers with Tecumseh PD on Friday, Dec. 10 responded to a 911 call concerning a child being attacked by a dog at Foster’s grandparents’ residence. Per a report from PEOPLE, dispatchers informed officers en route to the home that the child’s injury was a “complete amputation.”

Upon arriving on the scene, officers reportedly found Axel and his grandmother, Frances Forbes sitting in the driveway with Foster waiting for them. The police report said it clear that the boy was missing an arm at the shoulder.

With assistance from Tecumseh firefighters who also responded to the scene, the officer reportedly applied a tourniquet from his vest to the boy’s horrific injury.

Police began looking for the boy’s missing arm, which was nowhere to be found.

“The child’s arm was still in the pen,” Chief Kidney told KFOR.

Officer Aaron McCormick then went to the rear of the house where two adult pit bulls and several were kept.

“I could see the arm inside, and one of the puppies was trying to chew on it,” McCormick reportedly wrote in the police report.

Animal Control was sent to the home to assist police with getting the child’s arm out of the pen so doctors could attempt to reattach the limb.

“When officers and animal control attempted to retrieve the arm, the dog became aggressive to them,” Chief Kidney said. He added that the dog had to be put down before Officer McCormick was able to go into the pen and get the arm.

Forbes reportedly told officers on the scene that Foster had reached into the pen because he wanted to pet the puppies. That’s when the male adult attacked, latching its jaws around the child’s arm.

Per KFOR, detectives with Tecumseh PD and the Department of Human Services are investigating whether Foster was being supervised at the time of the attack.

“I’m hoping it was simply an accident that the child was able to get to the pen, but we will look at everything,” Chief Kidney told the station. “To be over just an innocent type thing of wanting to pat some puppies, it’s just devastating.”

If Foster had been left unsupervised, Kidney said the grandparents may be charged with child neglect.

Foster was rushed to Oklahoma University Trauma Center where he underwent two surgeries to have his arm reattached. Unfortunately, those surgeries were unsuccessful and Foster’s arm was amputated on Sunday, his mother said.

“Finally got to see my baby boy, get to go back today. He is still in critical condition, and had to have a third surgery yesterday because his amputated arm got infected,” McDow wrote Thursday on a GoFundMe page to help pay Foster’s medical bills. “He is on a breathing tube and a feeding tube. The site [sic] is heartbreaking to see. I could not stop crying. I pray no parent ever has to go through what I’m going through, and I pray no child has to go through what my baby boy is going through.”

The GoFundMe campaign has raised more than $6,800 as of Thursday afternoon.

“I am his mother just needing a lawyer to help my son to be in a safer environment,” McDow said Wednesday.