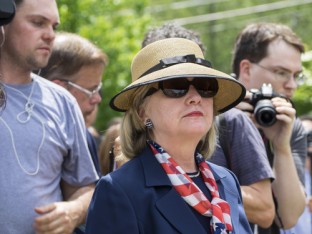 The State Department filed a request in federal court late Tuesday asking U.S. District Judge Emmet G. Sullivan to limit the scope of questions Judicial Watch can ask former aides to Hillary Clinton under oath during upcoming depositions in a FOIA lawsuit filed by the conservative legal advocacy group that seeks to determine whether Clinton’s use of a private e-mail server violated federal open records laws.

In February, Judge Sullivan found there was a “reasonable suspicion of bad faith” on behalf of the State Department in relation to its failure to ensure records from Clinton’s private server were properly retained and searched for FOIA purposes and granted Judicial Watch’s request to conduct discovery on the issue.  Judicial Watch then submitted a discovery plan that sought to depose top Clinton State Department aides, including Patrick M. Kennedy, Cheryl Mills, Huma Abedin and Bryan Pagliano regarding their knowledge of the Clinton e-mail server.

In its response to Judicial Watch’s proposal, the State Department asked Judge Sullivan order that Judicial Watch cannot question the Clinton aides under oath about “the substantive information sought by [Judicial Watch] in its FOIA request in this case, which involves the employment status of a single employee [Huma Abedin]; the storage, handling, transmission, or protection of classified information, including cybersecurity issues; and questions about pending investigations.”  The latter part clearly refers to the ongoing FBI investigation.

Additionally, the State Department also asked the court to allow them three days to review any deposition transcripts before they are made public and, “if necessary, seek an order precluding public release, quotation or paraphrase of any inadvertently disclosed classified information, information specifically exempted from disclosure by statute, or information relating to the pending FBI investigation.”

Judge Sullivan is expected to make a final ruling on the discovery motions by April 12.