Snowzilla Lockdown: What Happens If You Violate The Travel Ban 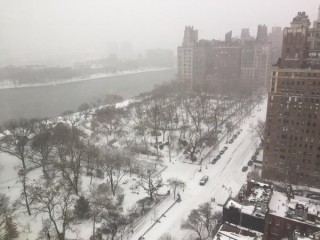 The travel ban in New York City has been lifted.

New York City has come to a standstill. The roads are covered in feet of snow. And at 2:30 p.m Saturday, New York City Mayor Bill de Blasio issued a travel ban closing the streets to any traffic except for emergency workers, and snow removal operations. Governor Andrew Cuomo followed suit with a ban on all state roads in New York City.

“It is imperative that people get off the roads. Anyone who has taken their car to work really should close down their work and get home now,” Mayor de Blasio said during a press conference.

So what happens if you violate the ban and are caught driving? This afternoon, de Blasio issued emergency executive order #90, declaring a state of emergency in New York City, which comes with some consequences. The Mayor said this to reporters:

“No one wants to have to arrest people, but the NYPD will take any measure necessary to keep our roads clear. If you want to avoid these enforcement actions, get off the street now.”

Yes, arrest or enforcement action. His spokesperson later clarified to LawNewz.com, that he meant that they would only arrest someone that was putting themselves or others in danger. Regardless, according to his executive order, “any person who knowingly violates the provisions of this order shall be guilty of a class B misdemeanor.” Under New York law, a Class B means you could be sentenced to up to three months in jail, and possible fines and surcharges.

Sounds like a nanny state in NYC. I do understand the need to keep folks off the road but a travel ban ? https://t.co/NMCOJu30aZ

@marklevinshow Travel Ban? Nanny State? Christie, Cuomo, and deBlasio will make decisions for you. I feel so much better.