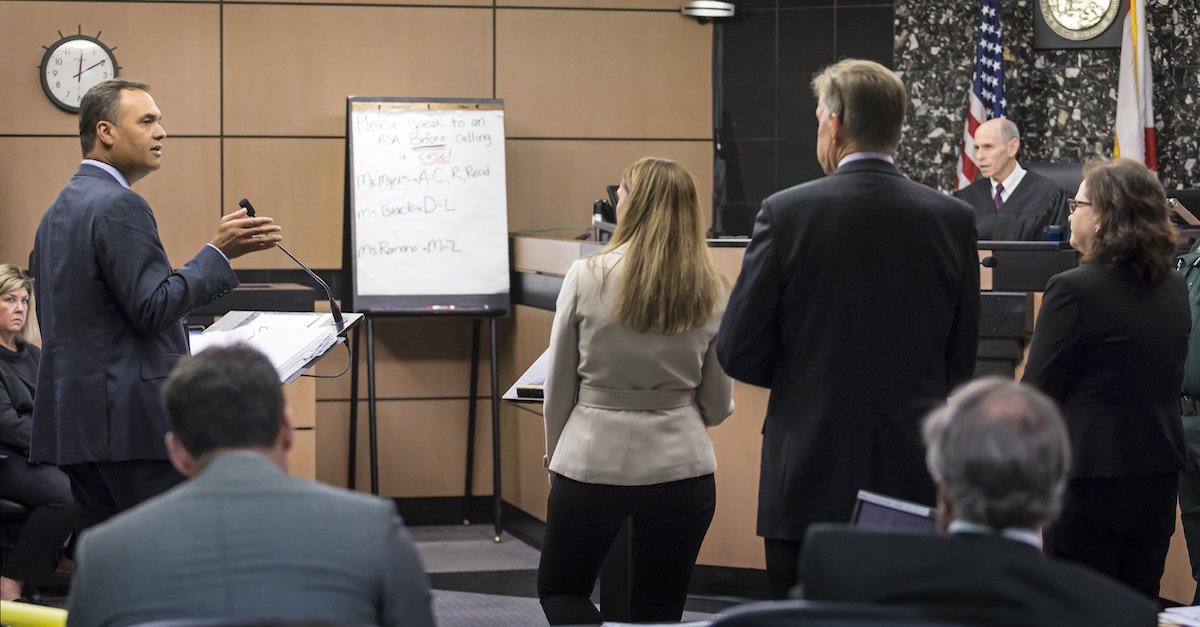 The defense lawyers for New England Patriots owner Robert Kraft in a Florida misdemeanor prostitution case have filed a lengthier response to state prosecutors’ allegations of witness intimidation and lying, plus a threat of contempt. In the response, they formally asked the judge to turn the tables on the state and hand down sanctions.

Attorneys William Burck and Alex Spiro previewed this Wednesday response on Tuesday, but it was not as strong as the latest one.

“The State’s Contempt Motion rests on knowing and intentional misrepresentations to the Court and slanders against defense counsel, all in bad faith and all sanctionable,” they began. “The prosecutors have now gone beyond trampling the rights of Mr. Kraft and into sullying the reputations of defense counsel, directing their prosecutorial misconduct straight at the undersigned lawyers.”

Kraft’s lawyers maintained that the state’s attempt, which they have called “desperate,” is “frivolous on its face.” They claim that the only party that has done anything wrong here is the state.

“In actuality, the only wrongdoing that has occurred before this Court is that of the State, and the State has only compounded its wrongdoing with its latest submission,” they said. “Nothing other than bad-faith efforts to distract from its own misconduct and from fatal defects in its case can explain why the State would be seeking criminal sanctions against defense counsel based on charges that have, quite obviously, been concocted by the prosecutors.”

“The very fact that the State waited nearly a week—until after Mr. Kraft filed his post-hearing brief walking through how established facts and law call for suppression of critical videos—before first hinting they perceived anything amiss in the defense’s conduct,” they continued, “confirms just how disingenuously, and absurdly, the State had to labor to fabricate its supposed case for criminal contempt.”

Prior to this the lawyers had said that they were “prepared” to say more and suggested that the judge should “consider imposing sanctions on the State and its attorneys for their bad faith in filing [the allegations].”

Prosecutors claimed earlier Tuesday that Spiro and Burck lied about evidence to intimidate and tamper with a witness, namely Jupiter Police Officer Scott Kimbark. Kimbark pulled over the vehicle Kraft was a passenger in after Kraft left the Orchids of Asia Day Spa. It was at that spa that Kraft allegedly solicited prostitution. Kimbark said Spiro claimed to have him on video “saying stupid shit” about being willing to make up a story to cover for a lack of probable cause in executing the traffic stop.

“His facial expressions as he smirked and his raised eyebrows along with his accusing statement intimidated me to believe I had done something wrong,” Kimbark said.

For this, prosecutors hammered Burck and Spiro.

“There are no rationalizations, justifications, or excuses for attorney Spiro’s and Burck’s knowing presentation of false and misleading accusations directly affecting the credibility of a material witness,” they said. “Four times [emphasis theirs] attorney Spiro accused the witness of having said he was ‘making shit up’ to cover for a lack of probable cause. The inflammatory words were never spoken by anyone other than by these attorneys for the defendant.”

“An in the defense’s closing arguments, attorney Burck reiterated to the Court the existence of the purported radio transmission, suggesting its impact on Officer Kimbark’s credibility,” the state continued. “It is clear attorney Spiro called Officer Kimbark as a rebuttal witness solely for the purpose of placing into the record a statement he knew was false and had never been made by anyone other than himself.”

Kraft’s attorneys responded quickly with a filing of their own, calling prosecutors’ motion “scurrilous” and “baseless.” They eventually turned their attention to Spiro’s encounter with Kimbark, saying that there was “no basis to attribute impropriety to the episode.”

“Nor can defense counsel’s exchange with Officer Kimbark possibly warrant contempt proceedings. As described by Officer Kimbark in his affidavit, the exchange occurred around fellow officers who all approached Mr. Spiro asking whether they could be released from testifying,” their response said. “Far from seeking to intimidate Officer Kimbark, Mr. Spiro was simply trying to answer his inquiries and provide guidance on whether and to what extent Officer Kimbark might be called. There is no basis to attribute impropriety to the episode, as confirmed by the fact that none of the many witnesses did attribute impropriety to it, until the State suddenly tried, days later, to mischaracterize it as something sinister.”

Burck and Spiro claim this is all an attempt by the state to distract the public from “inexcusable misconduct in failing to produce Officer Kimbark’s bodycam footage.”

“We are compelled to note that the State’s bad faith is sanctionable, and we are respectfully urging the Court to consider imposing sanctions at this point,” they said.

Kraft has been charged with two counts of misdemeanor prostitution and has pleaded not guilty. Burck and Spiro have prevailed so far when attempting to keep the video evidence away from the public.

Kraft Lawyers elaborate on their position by Law&Crime on Scribd