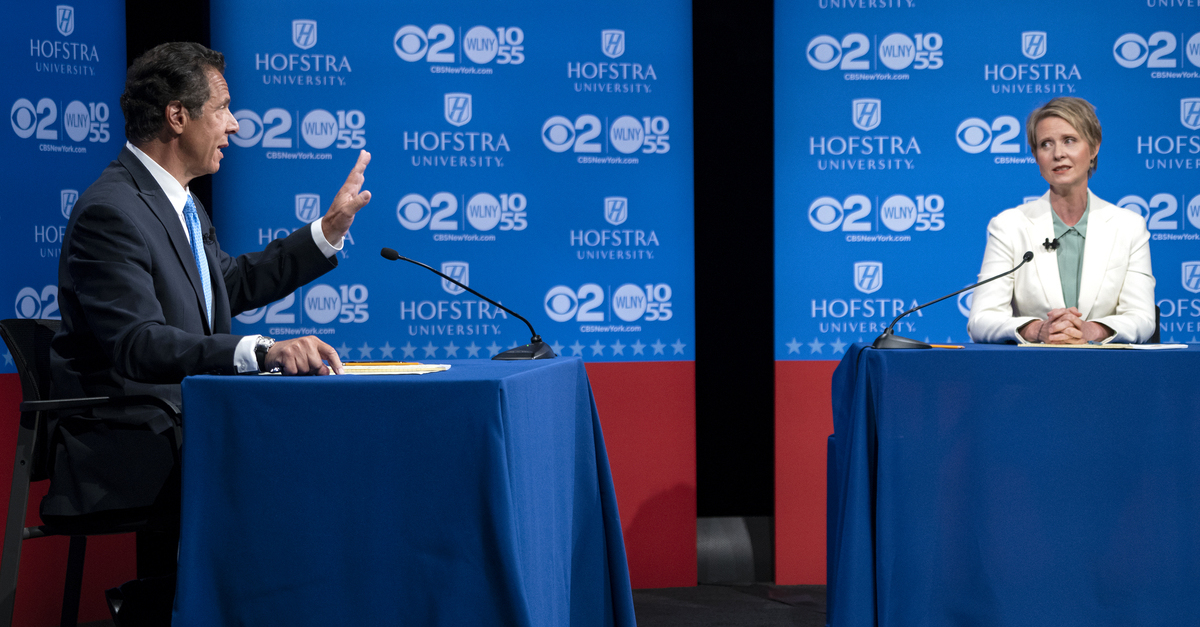 On the day New York State Democrats select their party’s standard-bearers for the upcoming midterm elections, voters are reporting numerous forms of procedural roadblocks, incorrect voting information and disenfranchisement that many suggest rise to the level of voter suppression.

In a series of tweets beginning mid-morning on Thursday, New York Magazine author Rebecca Traister detailed her own purge from Democratic Party voter rolls–despite the fact that she’s voted from the same address for the past four years. Traister noted that she wasn’t the only one experiencing such issues:

Also worth noting: this was 8:30, and the poll watcher who helped me said I was the second person she’d spoken to who had this problem—another woman who said she was an active, regular voter and not in the books.

Traister’s thread continued–and taking stock of the same thing happening to a friend of hers. She wrote, “Also! My next door neighbor, registered for years as a Dem, an RHA activist, extremely politically engaged, especially in local and state elections this season, is also not on the rolls at our polling place. She’s on her way to get a court order as we speak.”

Lydia Polgreen, editor-in-chief of HuffPost and a former director at the New York Times, said she had her information scrubbed from the Democratic Party’s voter rolls as well.

Happened to me too. https://t.co/fUWOJ31FJo

Jess McIntosh, a New York resident who hosts the popular Signal Boost show on Sirius XM also went to vote on Thursday morning. And when she did, McIntosh discovered that her name was not on the Democratic Party’s voter rolls either.

McIntosh described her situation by way of advice to others facing the same issue. She wrote, “Had to assert my rights for the 1st time at a polling place today! Reminder: if you’re in the right place and not on the rolls, sign an affidavit and cast a provisional ballot.”

Kristen Richardson discussed her own experience and that of multiple friends, noting that she’d never once been forced to accept an affidavit–or provisional–ballot before today:

Three of us just in my line weren’t on the voter rolls at my polling place (in Clinton Hill). This is the first affidavit ballot I’ve had to cast there. WTAF indeed.

Podcast host John Gawarecki-Maxwell also noted the extent of stories coming from New York State voters but didn’t appear to have experienced the issue himself:

All I’m hearing today is stories of people mysteriously purged from the voter rolls all over New York again, just like in the 2016 primary. Oh, but I’m sure it’s all just a coincidence that these purges overwhelmingly help the incumbent.

Another podcast host and author, Virgil Texas, made light of his own apparent disenfranchisement. He wrote:

To the 6 people left who have not been purged from the New York voter rolls: it’s Election Day. Kindly do what I couldn’t do and vote. When you get to all those judicial races just write in someone funny. Write in the Noid. Nick Mullen. It’s legal. There’s no laws on Election Day

Went into vote skipping. But just found out my name was not listed on the roll at my polling place. Despite having the recently sent documentation from board of elections with me. Had to fill out provisional. #Astoria #Queens #NYPrimaries pic.twitter.com/X1koftPJut

At least some voters found they were still on the voter rolls but came to learn that they had somehow been moved over to the conservative New York State Reform Party (which also holding their primary on Thursday).

Jalopnik writer Michael Ballaban noted, “So after years of being registered as a dirty dem, I get to the voting place today and am informed I am now registered as a member of the Reform Party. And that I can’t vote. WEIRD.”

I wasn’t able to vote today because my party had been mysteriously changed without my permission. I filled out an affidavit and hope my vote eventually counts but this is just a reminder that our voting systems are messed up no matter where you go.

Multiple voters who had been removed from the rolls attributed the change to some sort of an incumbent protection racket. Twitter user James Ryan wrote:

Peeved that my wife and I were nowhere to be found on the voting roll this AM in Wash Heights, despite not changing our registrations and voting recently as last year. Someone really didn’t want my vote for @CynthiaNixon and @ZephyrTeachout 😡

Seems like the 2016 purge of Democrat voters in NY was never fixed… and it’s weird that all the people I know having to file an affidavit ballot were Bernie voters in 2016 and Cynthia voters today. pic.twitter.com/6OABvFwnkX

But it wasn’t just a problem across the digital void.

This reporter witnessed a man at a Brooklyn polling station in Sunset Park pleading with poll workers to find his name and pointed at his wife’s name. After many minutes of arguing, he realized he’d been removed from the rolls as well. A devastated look gave way to acceptance as he solemnly accepted a provisional ballot. “I’ve lived here for 20 years,” he said.

And at least one elected Democrat appears to have taken part in some of New York’s infamous election day shenanigans. Large numbers of voters reported that they received a text message from New York State senator Marisol Alcantra with incorrect voting information:

Numerous people telling me they are receiving text messages from @NY31Alcantara in Upper Manhattan informing them that polls close at 7:30. Polls are actually open until 9p pic.twitter.com/LUQQV0wuCP

Law&Crime reached out to Senator Alcantra’s office for comment but no response was forthcoming at the time of publication.

And then there’s this letter which was circulated by the New York City Housing Authority–imploring all residents to stay home almost all day long on an election day:

On #NYPrimary day, #NYCHA asked its residents, mostly people or color, to remain home from 8 a.m. to 4 p.m. for an apartment inspection. Is that suss to you or nah? #VoteNYC pic.twitter.com/sj0HW0ntXy

Law&Crime reached out to the New York State Board of Elections for comment on this story. A promised phone call was not returned at the time of publication. This is a developing story.