Prosecutors Have the Leverage They Need on Paul Erickson | Law & Crime 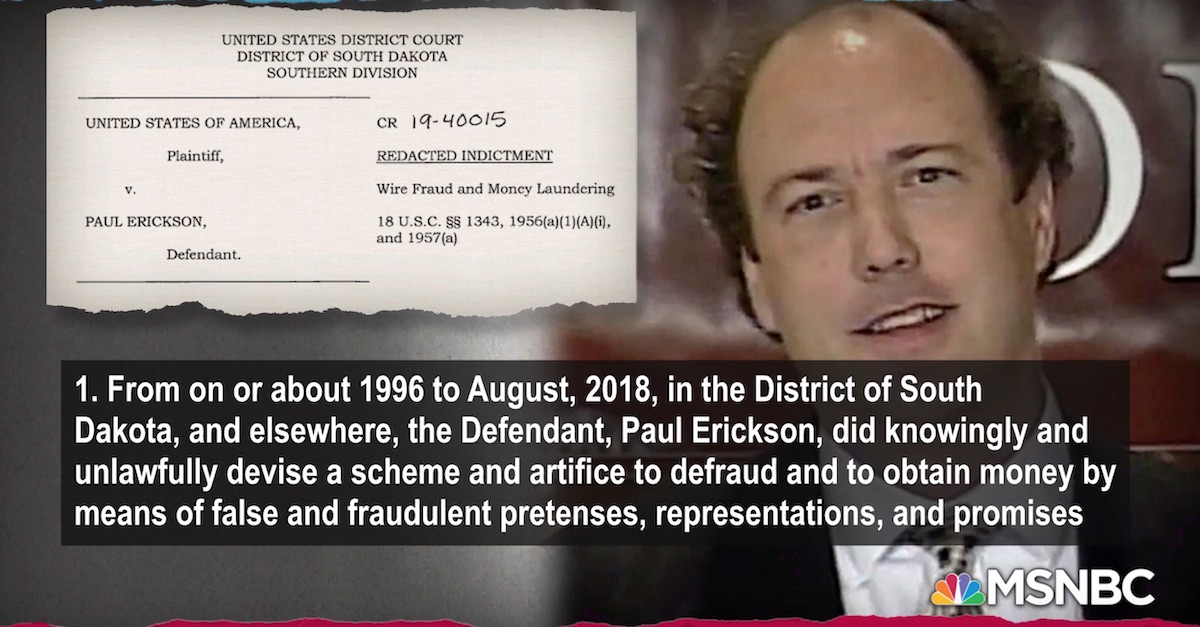 A Republican operative from South Dakota with National Rifle Association ties, who happened to be the boyfriend of accused Russian spy Maria Butina, faces serious wire fraud and money laundering charges — a fact that will almost certainly be used as leverage by prosecutors in a separate case. Paul Erickson was indicted Wednesday night in the U.S. District Court in the District of South Dakota.

The indictment plainly alleges that Erickson has been engaging in major criminality for more than 20 years.

“From on or about 1996 to August, 2018, in the District of South Dakota, and elsewhere, the Defendant, Paul Erickson, did knowingly and unlawfully devise a scheme and artifice to defraud and to obtain money by means of false and fraudulent pretenses, representations, and promises,” the indictment begins. Federal prosecutors say that Erickson owned and operated businesses like Compass Care, Inc., Investing with Dignity, LLC, and explored a North Dakota oil field venture for the purpose of “unjustly enrich[ing] himself at the expense of people he defrauded.”

Erickson has pleaded not guilty to 11 counts of money laundering and wire fraud. 18 U.S. Code § 1343 is the wire fraud statute, and it shows how deep of a predicament Erickson finds himself in:

Whoever, having devised or intending to devise any scheme or artifice to defraud, or for obtaining money or property by means of false or fraudulent pretenses, representations, or promises, transmits or causes to be transmitted by means of wire, radio, or television communication in interstate or foreign commerce, any writings, signs, signals, pictures, or sounds for the purpose of executing such scheme or artifice, shall be fined under this title or imprisoned not more than 20 years, or both. If the violation occurs in relation to, or involving any benefit authorized, transported, transmitted, transferred, disbursed, or paid in connection with, a presidentially declared major disaster or emergency (as those terms are defined in section 102 of the Robert T. Stafford Disaster Relief and Emergency Assistance Act (42 U.S.C. 5122)), or affects a financial institution, such person shall be fined not more than $1,000,000 or imprisoned not more than 30 years, or both.

That’s right, decades in prison is a possible punishment.

This is perhaps a crucial development in the Washington, D.C. case against Butina. Recall that after she was accused of illegally conspiring to influence American politics, Butina pleaded guilty to one count of a conspiracy to act as a foreign agent as part of a plea deal that includes cooperation with the government. Butina could be punished with up to five years in prison. Most importantly, Butina admitted that the others who were a part of this conspiracy were Erickson and the man believed to be her official Russian handler, Alexander Torshin. Torshin, a high-ranking official of Russia’s Central Bank, is considered a political ally of Russian President Vladimir Putin.

Butina said that she traveled to the U.S. to attend an NRA convention, met members of the Republican Party, and eventually asked Torshin whether she should develop a relationship with President-elect Donald Trump‘s inner circle. The now familiar phrase used here is that Butina admitted to doing this “under the direction” of the Russian official. As part of the plea deal, Butina said that she and an unnamed “U.S. Person 1” revealed to be Erickson “agreed and conspired, with a Russian government official and at least one other person, for Butina to act in the United States under the direction of a Russian Official without prior notification to the Attorney General.” The purpose of this was said to be “establish[ing] unofficial lines of communication with Americans having power and influence over U.S. politics.”

Remember that Erickson responded to being implicated in a conspiracy involving Russia by denying it.

Erickson issued a statement through his lawyer Bill Hurd to deny that he has ever done anything to hurt America.

“Paul Erickson is a good American. He has never done anything to hurt our country and never would,” Hurd said. Erickson, a U.S. citizen, reportedly received a “target letter” from prosecutors and may be charged for acting as a foreign agent.

Given the weight of the wire fraud charges in South Dakota, it seems likely that Erickson will be cornered into spilling the proverbial beans — that is, if there is a good deal of beans to spill.

Russian agent Maria Butina’s boyfriend, who is under criminal investigation for allegedly conspiring with her, was arrested today on unrelated fraud charges. That should give DOJ even more leverage over him. https://t.co/F87ZTck1RR

Former federal prosecutor Renato Mariotti noted that even though the fraud charges are unrelated to the conspiracy, they could very much be related to results. Butina pleaded her charges down to five years in prison by cooperating with the feds. Considering that decades behind bars is a possibility for Erickson, he may consider following suit.