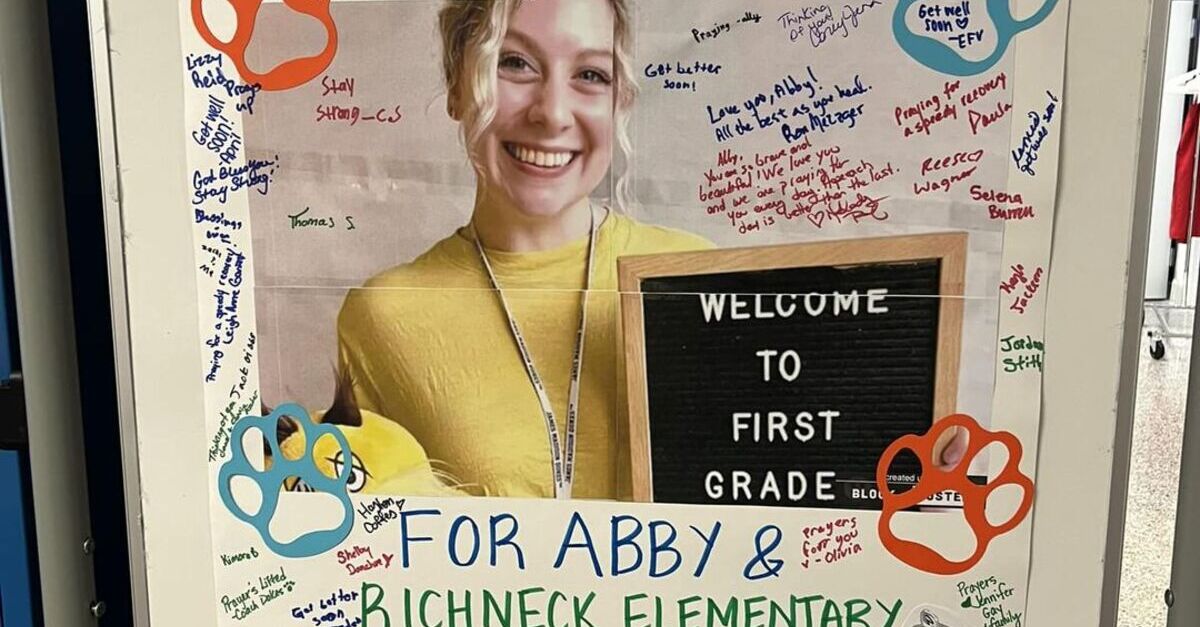 A local high school offers teacher Abby Zwerner a message of hope and resilience as she recuperates from being shot by one of her first grader students in Newport News, Va. on Jan. 6, 2023.

The parents of a 6-year-old boy who allegedly intentionally shot his first grade teacher at a school in Newport News, Virginia earlier this month are apparently defending themselves and their son through an attorney.

In an anonymized statement released through local attorney James Ellenson, the family claims the gun used in the shooting was locked up and suggested their child has a condition to blame for the violence.

“Our family has always been committed to responsible gun ownership and keeping firearms out of the reach of children,” the statement reads. “The firearm our son accessed was secured. While our son’s privacy interests are important, transparency in this matter is a valid community interest. Our son suffers from an acute disability and was under a care plan at the school that included his mother or father attending school with him and accompanying him to class every day.”

The statement does not explain how the gun was secured. Police have previously identified the weapon as a Taurus 9-millimeter handgun and said it was legally purchased by the boy’s mother.

The shocking incident, said to involve one of the youngest school shooters in the country’s substantial history of such violence, left 25-year-old teacher Abigail Zwerner severely injured and wounded in her chest and one of her hands. The victim was released from the hospital as an outpatient earlier this week. Her twin sister, Hannah Zwerner, has set up a GoFundMe to help with her recuperation and “cover future living expenses as Abby recovers from this tragedy.”

The Newport News Police Department has described the shooting, which occurred on the afternoon of Jan. 6, 2023, as “intentional.”

A spokesperson with the NNPD’s office told Law&Crime the statement was not sent to their office and that they first learned about the family’s alleged message through the media. In comments to Portsmouth, Va.-based NBC affiliate WAVY, the NNPD said they were unable to verify that the statement came from the child’s family.

Ellenson provided Law&Crime with the statement on request via email. In response to a series of follow-up questions, the attorney said he was making “no further comments at this time.”

Under Virginia law, an adult who “recklessly” leaves “a loaded, unsecured firearm in such a manner as to endanger the life or limb of any child under the age of fourteen” commits a class 1 misdemeanor – which is punishable by up to one year in prison and a $2,500 fine.

RELATED: How First-Grader Shooting Teacher Could Lead to Courtroom Showdown

Richneck Elementary School, where the shooting occurred, has been closed since the incident. In a message on Wednesday, interim principal Karen Lynch said parents would be alerted about a return date sometime next week.

Earlier this week, Newport News Police Chief Steve Drew said charges could be forthcoming against the parents but that he did not want to “rush” either his detectives or local prosecutors who will decide what to do with the evidence “in front of them.”

“This is an unprecedented incident that we have had in our city, where a 6-year-old child obtained a firearm, brought it to school, pointed it, fired, and shot his teacher in front of other students,” the chief said. “I have a young teacher who suffered a gunshot wound while teaching her classroom. By the grace of God, she’s still with us today.”

“Our heart goes out to our son’s teacher and we pray for her healing in the aftermath of such an unimaginable tragedy as she selflessly served our son and the children in the school,” the document reads. “She has worked diligently and compassionately to support our family as we sought the best education and learning environment for our son.”

Read the statement in full below: