Philosophy Professor Who Refused to Use Student’s Preferred Pronouns Gets $400,000 Settlement from Ohio School 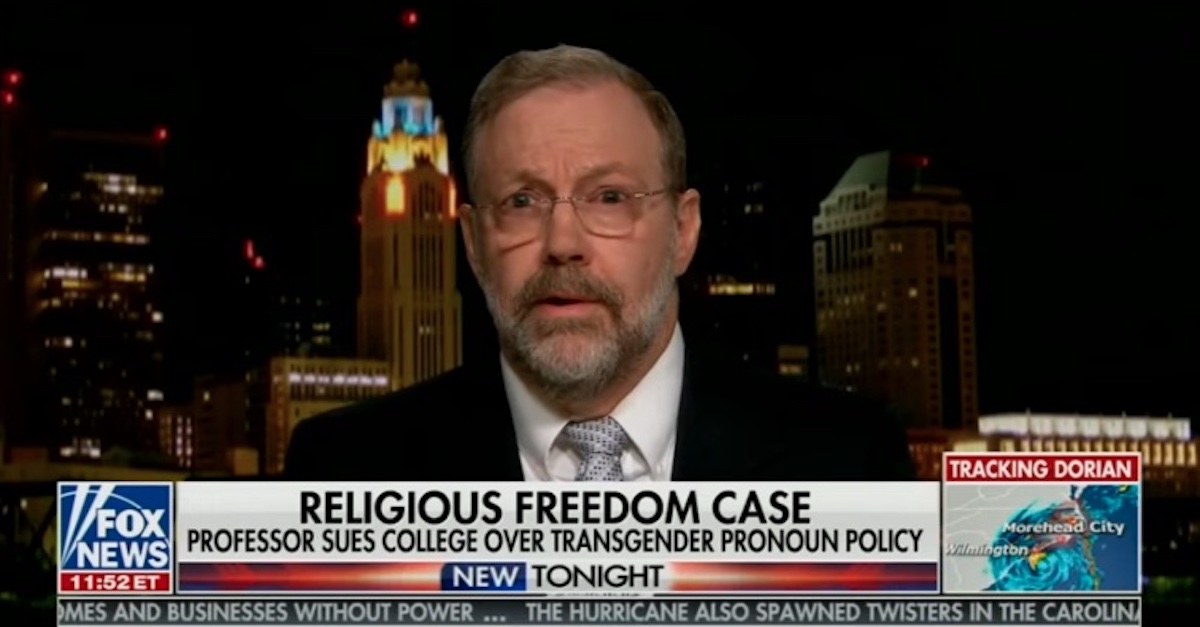 A university in Ohio has agreed to pay hundreds of thousands of dollars to settle a lawsuit by a professor who refused to call a student by the pronouns that reflect their gender identity.

Nicholas Meriwether, who has worked at Shawnee State University for more than 25 years, teaching courses in philosophy, religion, ethics, and the “History of Christian Thought,” sued his employer in 2018 after the school disciplined him for refusing to call a student by their preferred pronouns pursuant to a 2016 school-wide directive.

Meriwether sued the school after disciplinary actions were taken against him. Although a district court ruled against the professor, he won on appeal to the U.S. Court of Appeals for the Sixth Circuit: in March 2021, a panel of three judges—two appointed by Donald Trump, one appointed by George W. Bush—found that the school had failed to recognize Meriwether’s First Amendment rights to free speech and free exercise of religion. The judges remanded the case back down to the district court.

Now, it appears that the case has come to an end.

“Philosophy professor Dr. Nick Meriwether’s three-year quest to vindicate his First Amendment rights has concluded with a settlement in his favor,” a triumphant-sounding statement from Meriwether’s lawyers, the Alliance Defending Freedom, said, noting that the school has agreed to pay $400,000 in damages to Meriwether.

“As part of the settlement, the university has agreed that Meriwether has the right to choose when to use, or avoid using, titles or pronouns when referring to or addressing students,” the ADF statement said. “Significantly, the university agreed Meriwether will never be mandated to use pronouns, including if a student requests pronouns that conflict with his or her biological sex.”

A 2016 directive at Shawnee State, which has around 3,000 students, required instructors to refer to students by the pronouns that match their gender identity.

The student in the case, identified in court filings as “Jane Doe,” identified as female, although her assigned sex at birth was male. Doe asked Meriwether to use female pronouns when addressing her in class. The professor told Doe that doing so would “violate his conscience and sincerely held religious beliefs”—specifically, his belief that “God created human beings as either male or female, that this gender is fixed in each person from the moment of conception, and that it cannot be changed, regardless of an individual’s feelings or desires,” according to his lawsuit.

Meriwether, who addressed students either by “Mr.” or “Ms.”, did offer what his lawyers called a “compromise” of referring to Doe by her last name only, without the gender-based title he used for the other students. Doe did not accept this offer.

As part of the settlement, the ADF statement said, the school has also agreed to rescind the written warning it issued Meriwether in 2018.

In a statement, Shawnee State described the settlement as an “economic decision” that would allow the school to move forward.

“Though we have decided to settle, we adamantly deny that anyone at Shawnee State deprived Dr. Meriwether of his free speech rights or his rights to freely exercise his religion,” the statement said.

In this case, Shawnee State followed its policy and federal law that protects students or any individual from bigotry and discrimination. We continue to stand behind a student’s right to a discrimination-free learning environment as well as the rights of faculty, visitors, students and employees to freely express their ideas and beliefs. Over the course of this lawsuit, it became clear that the case was being used to advance divisive social and political agendas at a cost to the university and its students. That cost is better spent on fulfilling Shawnee State’s mission of service to our students, families and community.

Court records show that Meriwether’s lawyers filed a request to have the case dismissed with prejudice.

Editor’s note: This story has been updated with the statement from Shawnee State.