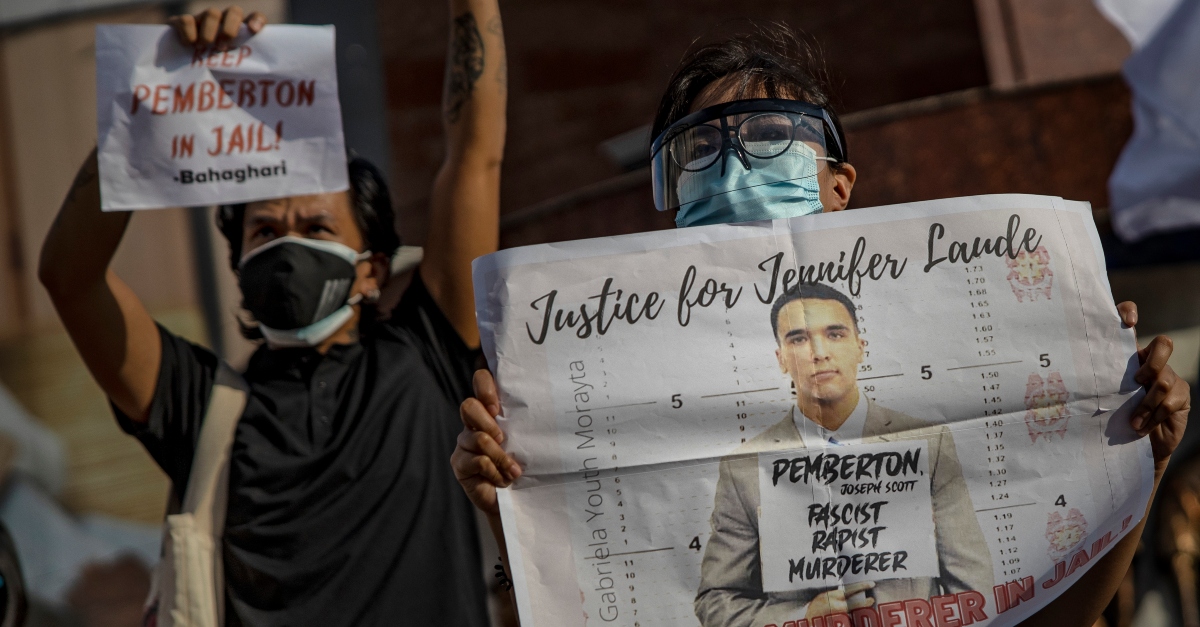 Getty Images: “Filipinos stage a protest against the absolute pardon granted to U.S. Marine Joseph Scott Pemberton, who was convicted in 2014 for killing a transgender woman, on September 8, 2020 in Quezon city, Metro Manila, Philippines. President Rodrigo Duterte of the Philippines has drawn criticism after granting a pardon to the U.S. Lance Cpl. Joseph Scott Pemberton, convicted of killing a Philippine transgender woman in 2014.“

The Philippines deported the U.S. Marine who was recently pardoned in the 2014 killing of a transgender woman. Lance Corporal Joseph Scott Pemberton was flown out on an American military plane Sunday morning, according to The Associated Press. This happens shortly after that nation’s President Rodrigo Duterte pardoned him in the 2014 homicide of Jennifer Laude, 26.

In a statement from his attorney Rowena Garcia-Flores, the defendant expressed regret for what happened.

“He wishes he had the words to express the depth of his sorrow and regret,” said the statement. It was stated that the defendant had contemplated “the many errors” of that night in 2014.

Attorney Virginia Suarez, who represents Laude’s family, said she wished Pemberton “peace of mind,” and expressed hope he had learned “the value of life and dignity regardless of gender and nationality.”

But controversy followed Duterte’s decision to pardon Pemberton, who was in the middle of a legal controversy over whether he would get good behavior credit toward his 10-year sentence for homicide.

Laude’s mother Julita Laude said she felt Duterte betrayed her, and that he had promised that Pemberton would not see freedom during his term in office, according to The Washington Post. They were only asking for the inmate to spend ten years in prison, she said.

“Ten years!” she said. “It’s a short time to pay in jail for the life of my daughter.”

According to trial, Pemberton and Laude met at a nightclube in the City of Olonagpo, and went across the street to a motel. They went in together. He left alone. Laude was found with her head in a toilet. The cause of death was determined to be drowning.

BREAKING: A local court has ordered the release of Joseph Scott Pemberton, the US Marine convicted of killing transgender woman Jennifer Laude in 2014. https://t.co/tVSh57HH0x

At trial, the defendant asserted he only choked her to unconsciousness, and that she was still breathing when he left her. The defense said that Pemberton felt “raped,” claiming that Laude performed oral sex on him without telling him she was transgender, according to The New York Times.

Pemberton was ultimately convicted of the lesser-charge of homicide, instead of the original count of murder. His sentence of six to 12 years in prison was later knocked down to 10, and the Olongapo City Regional Trial Court determined that Pemberton qualified for good conduct time. He served over five years and eight months behind bars. Laude’s family wanted to fight the decision, but Duterte stepped in and asserted that Pemberton should be allowed “the good character presumption.”