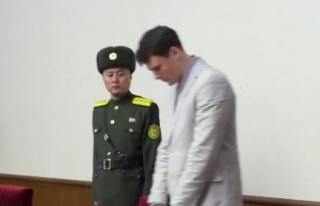 Otto Warmbier, the University of Virginia undergrad who was arrested in North Korea for allegedly stealing a political sign in February, was sentenced, a North Korean official told CNN on Wednesday. Warmbier has been sentenced to 15 years of prison and hard labor, after he confessed in a bizarre press conference last month. His trial lasted just one hour, according to the New York Times.

North Korea accused Warmbier of acting on behalf of the CIA, a secret society at UVA who denied ever having ties to him, and an Ohio church that said he wasn’t even a member.

Ohio Governor and Republican Presidential candidate John Kasich issued a statement, calling on North Korea to release Warmbier immediately.  Kasich said the sentence was “an affront to the concepts of justice,” and that President Obama‘s administration should redouble its efforts to free Warmbier.

The New York Times says Mr. Kasich had urged former New Mexico Governor Bill Richardson to get involved, due to his prior experience dealing with North Korea. Richardson had in fact met with two North Koreans the day before the sentence was announced.

Richardson said this development follows “a familiar pattern with American detainees,” according to the Times. “Hopefully a prelude to negotiations that might lead to a release on humanitarian grounds.”