‘Look at Her Behavior!’: Nancy Grace Erupts in Disbelief Over Dalia Dippolito Mistrial 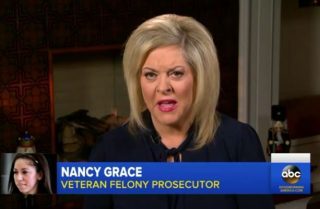 The jury in the retrial of Dalia Dippolito, who was charged with solicitation to commit first degree murder, could not reach a verdict, leading the judge to declare a mistrial on Wednesday. Dippolito was accused of attempting to hire a hitman to kill her then-husband back in 2009, but the man she solicited ended up being an undercover officer. The plot was caught on camera and shown on the television show “Cops.” The jury was split 3-3 over whether to convict her.

Thursday morning, Nancy Grace went off on the jury’s decision on ABC’s “Good Morning America.” Grace was stunned that any of the jurors could believe that Dippolito was not guilty, especially when cameras captured her reaction to officers telling her that her husband was dead as part of a staged crime scene. Also caught on video was the revelation that her husband was alive all along, and her arrest. Grace was not at all convinced that her reactions to anything were genuine. “Look at her behavior. What I always come back to is how she acted at the time of her arrest. To me, that tells it all.”

LawNewz.com founder Dan Abrams called the result a “legal head scratcher.” Abrams mentioned that in Dippolito’s first trial, her defense was that she was on a reality show and was acting, which was different than her defense this time around. In the second trial, Dippolito’s attorneys focused on what the police did wrong in handling the case. Abrams commented that while followers of both trials knew that this was completely different, the jury in the second trial was unaware.

Dippolito’s first trial resulted in a conviction that was later overturned on appeal. After Wednesday’s mistrial, she remains under house arrest until prosecutors.