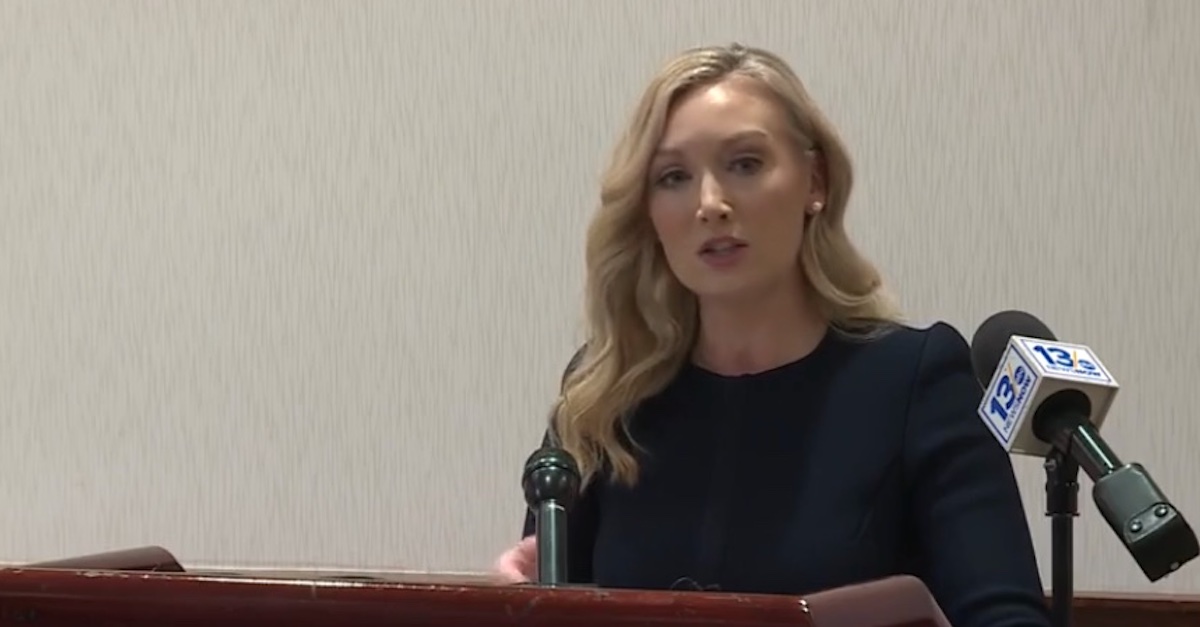 Attorney Diane Toscano speaks at a press conference on Jan. 25, 2023, about her client Abby Zwerner. Zwerner, a first-grade teacher at Richneck Elementary School in Newport News, Va., suffered “life-threatening” injuries after being shot by a six-year-old student on Jan. 6, 2023. (Screengrab via Facebook/WAVY.)

The lawyer for the Virginia first-grade teacher shot by a 6-year-old student says that school administrators were warned multiple times that the child had a gun with him, but “couldn’t be bothered” to take action.

Abigail Zwerner, 25, is facing “life-threatening” injuries after being shot on Jan. 6 by the student who had allegedly brought a gun to Richneck Elementary School. At a press conference Wednesday, attorney Diane Toscano said Zwerner and other teachers had warned administrators multiple times that day about the child and the weapon, but they did nothing.

According to Toscano, the first warning came at around 11:15 to 11:30 a.m., when Zwerner, pursuant to school protocol, told the school administrator that the student had “threatened to beat up a child” that same day.

“But the school administration could not be bothered,” Toscano said, adding that no one called security and the student was not removed from the classroom.

At around 12:30 p.m., another teacher went to a school administrator and told them that she had searched the bag of the boy who was suspected of bringing the gun to school. According to Toscano, this teacher told the administrator that she believed the boy had put the gun in his pocket before going outside for recess.

“But the administration could not be bothered,” Toscano said again. “The administrator downplayed the report from the teacher and the possibility of a gun, saying — and I quote — ‘Well, he has little pockets.'”

“This is outrageous,” Toscano added, noting that again, no police were called despite a report of a potentially armed student.

Shortly after 1:00 p.m., a third teacher reportedly warned administrators after a boy had allegedly told her that “the perpetrator showed him the gun at recess and threatened to shoot him if he told anybody.”

“What did the administrator do? Nothing,” Toscano continued, adding that the police were not called, and administrators did not lock down or evacuate the school, nor did they confront the student.

A fourth school employee who had “heard about the danger” asked the school administrator for permission to “search the boy,” but was denied.

“He was told to wait the situation out because the school day was almost over,” Toscano said. “Let that sink in.”

“These teachers are selfless,” Toscano said during the press conference. “One teacher even went into the classroom after Abby was shot and restrained the shooter until police arrived.”

Toscano had sharp words for school authorities who she said failed Zwerner that day.

“Abby Zwerner was shot in front of those horrified kids, and the school and community are living the nightmare — all because the school administrator failed to act,” Toscano said. “Were they not so paralyzed by apathy, they could have prevented this tragedy.”

Toscano said that she sent notice Wednesday to the Newport News school board of her intention to file a lawsuit on Zwerner’s behalf. She did not specify what claims she will allege, but her focus on what she described as the administration’s failure to act signals that a negligence claim will be among them.

Zwerner, who suffered gunshot wounds to her hand and chest, was released from the hospital last week. Toscano says Zwerner is recovering at home and “gaining strength every day,” despite having a bullet that “remains dangerously inside her body.”

Police have said that it was “not an accidental shooting.”

Weeks after the incident, the parents of the child issued a statement through their attorney defending themselves and saying that their child has an “acute disability” and that the firearm, identified as a Taurus 9-millimeter handgun, was “secured.”

Newport News police chief Steve Drew has praised Zwerner for getting her students safely out of the classroom after she was shot and credited her with saving lives, the Washington Post reported.

The Newport News School Board held a special meeting on Wednesday night and voted to approve a separation agreement and severance with superintendent Dr. George Parker III. A statement from the school indicated that the decision was not related to the shooting.

“Effective February 1, 2023, Dr. Parker will be relieved of his duties as Superintendent of NNPS,” a statement from the school board said. “It is important that we state that this decision was made without cause as Dr. Parker is a capable division leader who has served NNPS for nearly five years through some extremely challenging circumstances. This decision based on the future trajectory and needs of our school division.”

According to the Associated Press, Parker will receive $502,000 in severance, or two years of his current base salary of $251,000.

Editor’s note: this story has been updated to reflect Parker’s removal as superintendent.