Two Virginia Cops, One of Whom Taunted the Left to ‘Keep Poking’ the ‘Right,’ Get Canned After Taking Selfie During Capitol Siege 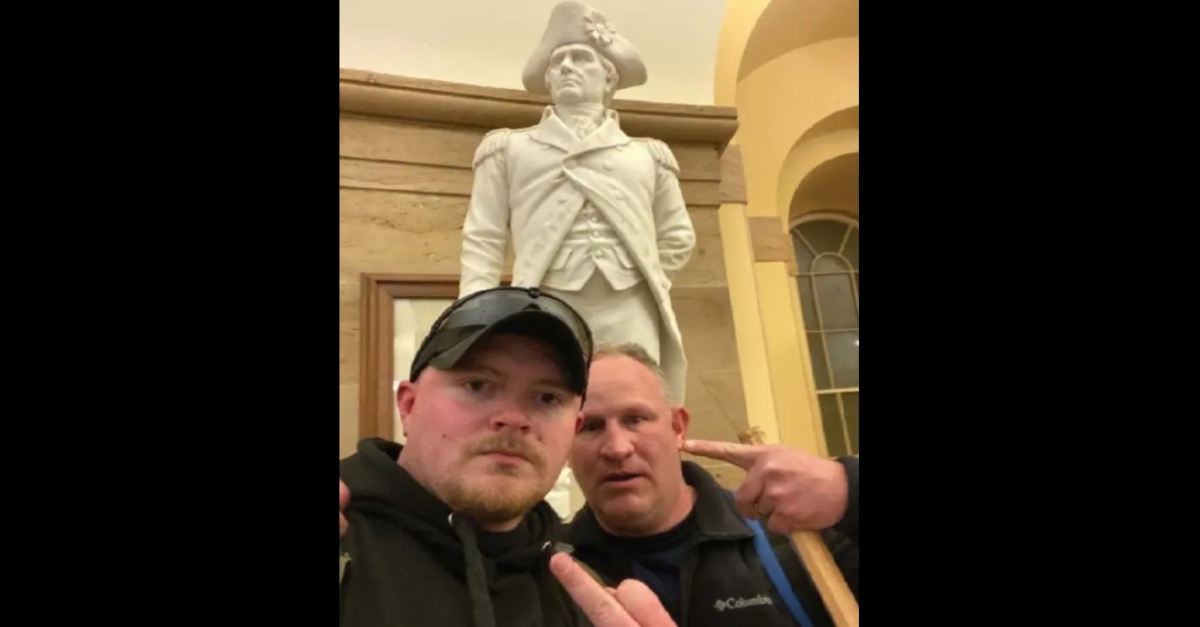 “We hear those who have communicated their anger and frustration about the actions of these individuals or our response to those actions,” the Town of Rocky Mount said in a statement. “There is no playbook for dealing with what occurred on January 6. We have treated the process of review seriously from the beginning and thank those who contributed and in coordinating a response in a quick, objective and lawful manner.”

Supporters of then-President Donald Trump raided the Capitol Complex after he continued to lie that he won the 2020 presidential election and to claim it was being stolen from him. Rioters postponed, but did not prevent, Congress from counting electoral college votes that gave current President Joe Biden the victory. Four Trump supporters and one Capitol Police officer died in the chaos.  Another Capitol office died by suicide mere days later, as did a defendant.

Fracker and Robertson were there; the picture above, in which they pose in front of a statue of Revolutionary War Major General John Stark, puts them at the scene. The defendants’ employment status was up in the air for a while; they were suspended without pay on Friday.

“There was absolutely no indication that we were anything but welcome to check out certain places,” Robertson told WSET-TV in a January 12 report. “We did not participate in any violence or property damage.”

Fracker said he was deployed to Afghanistan as a Marine and currently serves with the Virginia Army National Guard. Robertson, a sniper in Operation Iraqi Freedom, is an Army veteran.

Investigators are not letting them off the hook. From the charging statement of facts:

In a statement to Newsweek, Defendant Robertson admitted that he and Defendant Fracker sent the photo to their police department colleagues, and after it was leaked to social media he reposted it on his own Facebook page. It has also been reported that Robertson stated that he broke no laws, did not know about the violence, and that he had been escorted “in” by the Capitol Police. Robertson made these claims notwithstanding his previous posts that he had “attacked the government” and “took the f**** Capitol.” Moreover, at that date and time, the United States Capitol was on lockdown and the defendants’ presence inside was without lawful authority.

“CNN and the Left are just mad because we actually attacked the government who is the problem and not some random small business … The right IN ONE DAY took the f***** U.S. Capitol,” he is quoted as saying in social media posts, according to the FBI. “Keep poking us.”

Fracker and Robertson are charged with knowingly entering or remaining in any restricted building or grounds without lawful authority; and violent entry and disorderly conduct on capitol grounds.

[Images via Federal Bureau of Investigation]