Jussie Smollett Testifies in His Own Defense During Trial 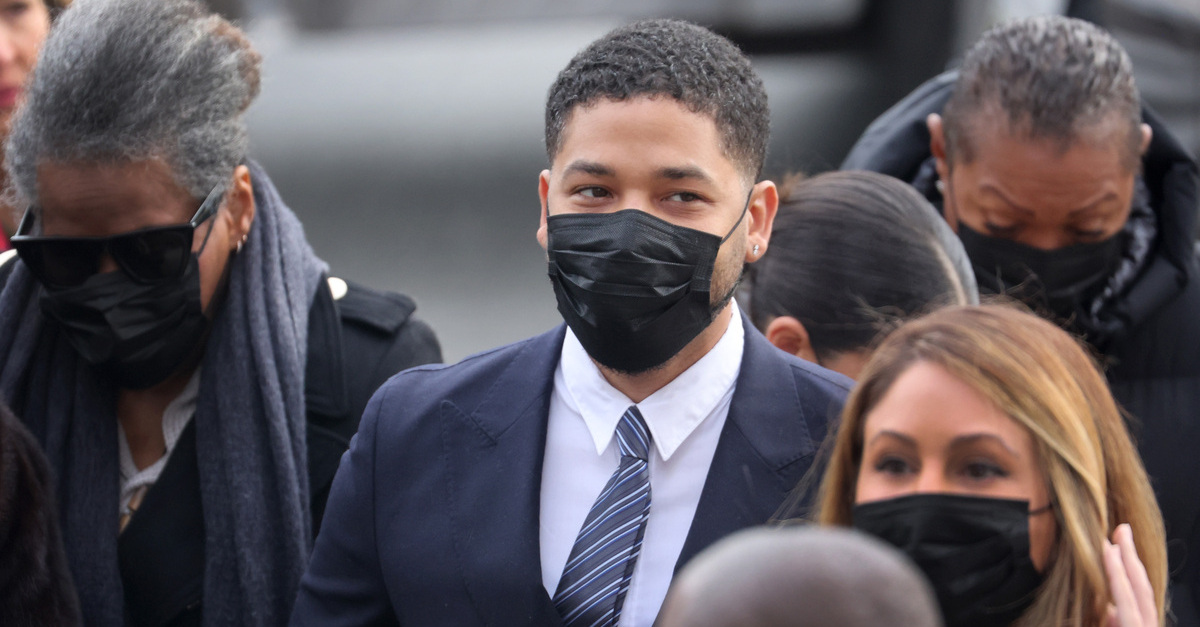 CHICAGO, ILLINOIS – NOVEMBER 29: Former “Empire” actor Jussie Smollett arrives at the Leighton Courts Building for the start of jury selection in his trial on November 29, 2021 in Chicago, Illinois. Smollett is accused of lying to police when he reported that two masked men physically and verbally attacked him, yelling racist and anti-gay remarks near his Chicago home in 2019.

Actor Jussie Smollett took the stand during his disorderly conduct trial in Chicago on Monday. During his testimony, the former “Empire” star dismissed the prosecution’s case alleging that he staged an elaborate homophobic and racist hate crime hoax in January 2019.

“There was no hoax,” Smollett insisted to Cook County jurors.

The contours of the case are well known: Chicago police and prosecutors allege the defendant, who is Black and gay, hired brothers Abimbola Osundairo and Olabinjo Osundairo to jump him and leave him with minor injuries on the night in question in order to elicit sympathy from the public and a raise from his former employers.

In his defense, Smollett dismissed the government’s motive-focused suggestion that he had any “issues” with producers at Fox, at times noting the massive success of the television program as well as detailing the unprecedented and generous nature of his own writing agreement, according to Chicago Tribune reporter Jason Meisner.

As for the Osundairos, the defendant admittedly cut them the $3,500 check which the prosecution has cited as the payment for the alleged hoax. He has repeatedly insisted, however that the payment was for personal training services. Those services he said, were eventually negotiated after he struck up a party-and-play-style relationship with Abimbola Osundairo, whom he referred to on the stand as “Bon.”

The two met, Smollett said, at a club where they “did some drugs” before shifting gears and heading to the Steam Works bathhouse in Boystown, a Chicago neighborhood that is known as home to one of the most vibrant LGBTQ communities in the world.

Typical night scene substances were used the night they met, he said.

“Cocaine and weed,” Smollett said when asked what kind of drugs the two used. “I had the weed. I always have weed on me. Not now, but…”

The defendant went on to say his eventual co-assailant–or, as police and prosecutors allege, co-conspirator–had been to the bathhouse before. It was his first time experiencing the private rooms, Smollett said, where pornography was playing on multiple screens.

“We did more drugs and we like, made out,” he testified. “There was some touching.”

After exchanging numbers on the set of “Empire” following a guest star’s request for MDMA, commonly known as “molly” or “ecstasy,” Smollett said he and Abimbola Osundairo became closer friends.

They went to the bathhouse again on a separate night, he said, after the other brother “took the vibe out of the room” at a strip club.

“We went alone, we got a private room again,” Smollett told the jury of the encounter (Osundairo previously denied “[s]ame-sex sexual activity” with Smollett). “We made out a little bit and this time we masturbated together.”

The two would ride around together smoking blunts, the defendant testified, referring to marijuana wrapped up in a piece of cigar tobacco. That’s where they listened to music together, Smollett said.

Prosecutors have previously referred to one such drive as a “dry run” for the alleged hoax attack.

None of this translated into a fondness for Olabinjo Osundairo, the defendant testified.

“He kind of creeped me out,” Smollett told jurors.

“No,” he continued when asked if the other Osundairo was his friend. “I didn’t even know his name. It was one of those, you see somebody too many times to ask them their name. I was just like, ‘Hey brother.’”

According to the Chicago Tribune, the defense has suggested that Olabinjo Osundairo is a homophobe. Abimbola Osundairo, for his part, has denied that he ever had a relationship with the actor.