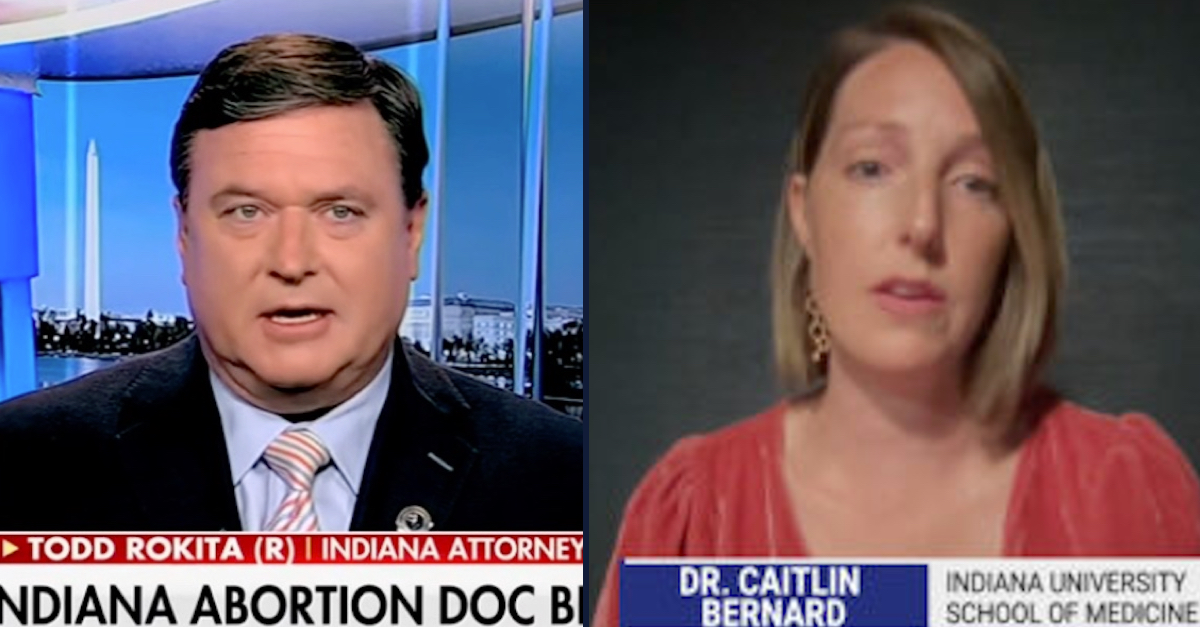 An Indiana judge has found that state Attorney General Todd Rokita (R) caused “irreparable harm” to the reputation of a doctor who provided an abortion to a 10-year-old rape victim, but both sides are claiming victory after the judge denied the doctor’s motion for an injunction.

The ruling from Marion Superior Court Judge Heather Welch, issued late Friday, denied Dr. Caitlin Bernard‘s request for a preliminary injunction blocking Rokita from using what Bernard described as “frivolous” consumer complaints against her. Rokita has been relentless in his criticism of Bernard since July, when the Indianapolis Star published a story in which the doctor said she provided an abortion to a 10-year-old rape victim from Ohio who had to come Indiana for care due to her home state’s restrictive laws.

The judge found that Bernard’s motion, which was also filed on behalf of Bernard’s medical partner Amy Caldwell, was moot because Rokita had filed an administrative complaint with the state’s medical licensing board on Wednesday.

“Dr. Bernard has met her burden to show irreparable harm based on the Attorney General’s public statements regarding investigations which by Indiana law must have remained confidential until the complaint was filed with the Medical Licensing Board,” Welch wrote in her ruling, after finding that Bernard had not successfully made a showing of irreparable harm on other grounds.

Noting that Indiana law requires confidentiality of consumer complaints and information relating to consumer complaints until the attorney general files a notice with the licensing board, Welch found that Rokita “had not referred the claims to the Medical Licensing Board or initiated prosecution of Dr. Bernard when he made public statements on the investigations prior to November 30, 2022.”

“Such public disclosures prior to that date then were clear violations of Indiana law,” the judge added.

Welch also found that the law did not bind Bernard, and therefore the doctor did not violate state law when she made comments about the investigation. Nor did Bernard waive confidentiality by sharing certain details of the case with the Indianapolis Star reporter.

“[T]he Court finds that Dr. Bernard comments to the IndyStar reporter had no bearing on the issue of the Attorney General maintaining confidentially as her comments to the IndyStar reporter were made prior to the filling of any complaints with the CPD,” Welch wrote. “The public statements made by the Attorney General prior to the referral of the matter to the Medical Licensing Board, therefore, are clearly unlawful breaches of the licensing investigations statute’s requirement that employees of the Attorney General’s Office maintain confidentiality over pending investigations until they are so referred to prosecution.”

Welch found that although Bernard was unable to show “further irreparable harm per se,” the doctor’s “concerns about reputational and professional harm as a result of the Attorney General’s comments do constitute irreparable harm for the purposes of this preliminary injunction motion.”

In a statement issued Friday, lawyers for Bernard highlighted the judge’s finding that Rokita had violated Indiana state law.

“Today Judge Welch ruled that Attorney General Todd Rokita violated his duty of confidentiality under Indiana law and confirmed that there was no basis for the Attorney General to investigate Dr. Bernard’s partner, Dr. Amy Caldwell,” attorney Kathleen DeLaney said in a statement. “Last week, my client and other witnesses gave critical and favorable testimony, after which Mr. Rokita suddenly moved the case to a new forum, taking it out of the hands of Judge Welch. We are confident in the record and testimony that we have already developed and look forward to presenting Dr. Bernard’s evidence to the Medical Licensing Board.”

“This is a win for patient privacy rights in the practice of medicine and for properly reporting child abuse,” Rokita’s office said a statement Friday. “This case is not really about abortion, despite the best efforts of those with an agenda to make it appear that way.”

[Image of Rokita via Fox News screengrab. Image of Bernard via MSNBC screengrab.]