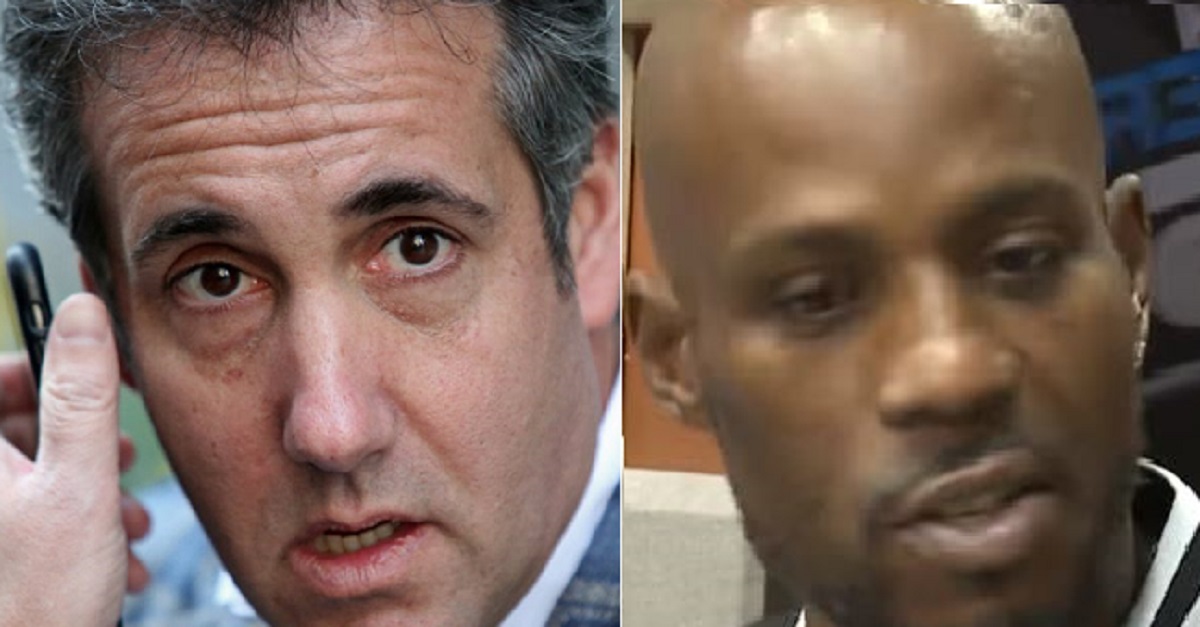 Michael Cohen and his attorneys made several arguments in a recent court filing for why he shouldn’t face any time behind bars in the case where he pleaded guilty to campaign finance violations, as well as bank and tax fraud. One such argument? Others have done worse and gotten fairly light sentences.

“Rather, we respectfully submit that the nature of the instant conduct suggests that, on a comparative basis, it warrants relatively less punishment than cases where sophisticated means and schemes are employed,” Cohen’s lawyers said in a court filing.

Of course, when one thinks “sophisticated,” the first name that usually comes to mind is rapper DMX. Well, it did for Cohen’s team, anyway. They cited the case of United States v. Earl Simmons, where the man known for hits like “Ruff Ryders’ Anthem” faced up to five years in prison for tax evasion where he owed $1.7 million in back taxes, only to get a one year sentence.

Cohen believes that his case wasn’t as bad as DMX’s, where the “Lose My Mind” rapper “engaged in a ‘brazen, multi-year scheme to fraudulently conceal millions of dollars in income … and avoid paying $1.7 million in taxes,'” Cohen cited, noting that DMX’s “scheme” involved depositing money into his managers’ accounts and then having them disburse the income, insisting that payment from a reality show not have taxes taken out, failing to file taxes in a year he made millions, and filing a false bankruptcy petition.

See, when you look at it that way, what Cohen did isn’t so bad, right? Right? His lawyers sure hope the court thinks so, pointing out that similar “unsophisticated” schemes by other notable personalities have been handled by the IRS, not the criminal justice system. Of course, the figures he cited, including John Travolta and Willie Nelson, didn’t also commit bank fraud or campaign finance violations.

Regarding bank fraud, Cohen noted that while he did lie for purposes of getting a loan, for years he did not default on any loans. As for the campaign finance violations for arranging payments to Stormy Daniels and Karen McDougal, Cohen noted that he wasn’t acting on his own behalf, but for President Donald Trump. Similarly, when Cohen lied to Congress about the timeline of negotiations with Russia for a Trump real estate project, he was acting in Trump’s interest, not his own.

For these reasons, Cohen’s attorneys are pushing for a sentence of time-served. Time will tell whether the court feels his deeds were worse or not as bad as DMX’s.

[Image of DMX via screengrab; image of Michael Cohen via Yana Paskova/Getty Images]