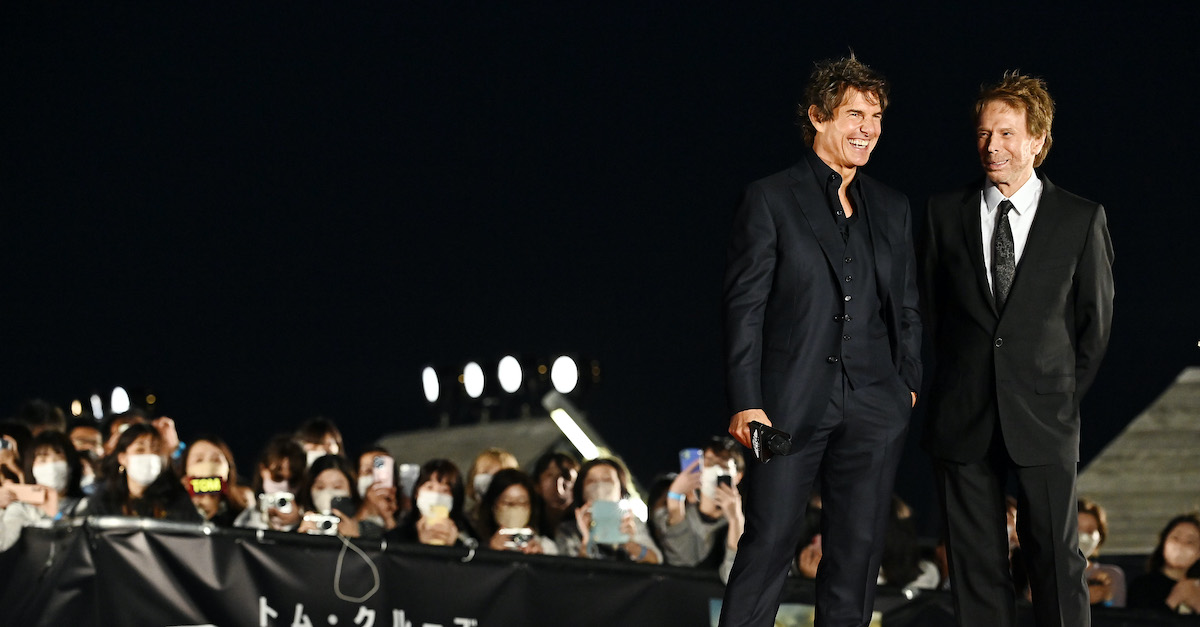 Actor Tom Cruise and producer Jerry Bruckheimer attend the red carpet for the Japan Premiere of “Top Gun: Maverick” at Osanbashi Yokohama on May 24, 2022 in Yokohama, Kanagawa, Japan.

The widow and son of Top Guns author Ehud Yonay sued Paramount Pictures in federal court for copyright infringement on Monday over the release of Top Gun: Maverick, the sequel to the 1986 blockbuster film Top Gun.

The 1983 Yonay story Top Guns told the tales of hotshot pilot Yogi and his radio intercept officer Possum in a portrait of an elite Navy fighter squadron. Top Gun, the Jerry Bruckheimer film that helped launch the career of Tom Cruise, was released some three years later.

“Indeed, the literary and cinematic way the story humanized and energized its subject was so compelling that Paramount immediately sought to lock up exclusive film rights from its author,” the 15-page complaint states. “The resulting films, which faithfully translate this vision and narrative to the screen, have given audiences worldwide a close-up look at the lives of U.S. Navy fighter pilots, as curated by Ehud Yonay’s compelling story.”

The 1986 film owes its success to Yonay, the heirs say.

“There is no doubt that the copyrighted Story was the clear genesis of Paramount’s 1986 mega-hit film, ‘Top Gun,'” according to the lawsuit. “But for the Author’s literary efforts and evocative prose and narrative, Paramount’s beloved film franchise would not exist.”

Widow Shosh Yonay and son Yuval Yonay claim to own the copyright of the story.

“Despite the 2022 sequel clearly having derived from the story, Paramount consciously failed to secure a new license of film and ancillary rights in the copyrighted story following the Yonays’ recovery of their U.S. copyright on January 24, 2020,” the complaint states.

That is the date that the heirs claim to have sent Paramount a notice of termination, ending the author’s grant of the rights and making themselves the sole owners of the copyrights. The lawsuit claims that Paramount never secured a new license.

“Without a newly secured license, Paramount’s exploitation of the 2022 Sequel in the United States constitutes ongoing intentional infringement of the Yonays’ copyright, including without limitation, their exclusive right to ‘prepare derivative works based upon the copyrighted [W]ork,’ 17 U.S.C. § 106(2), which Paramount had owned pursuant to the Grant, but lost on January 24, 2020, and willfully proceeded to exploit nonetheless,” the lawsuit alleges.

One of the Yonays’ attorneys is ex-Ninth Circuit Court of Appeals Judge Alex Kozinski, who retired from the bench after being accused of sexual harassment by female staffers. Kozinski forwarded Law&Crime’s press inquiry to co-counsel Marc Toberoff, who did not immediately respond to an email requesting comment.

“These claims are without merit, and we will defend ourselves vigorously,” Paramount said in a statement, according to Reuters.

According to the news wire, Top Gun: Maverick has become this year’s biggest box office hit, generating $291 million in North America and $548.6 million globally in its first 10 days of release.

The family filed their lawsuit in the Central District of California, alleging three causes of action for declaratory judgment, copyright infringement and injunctive relief.