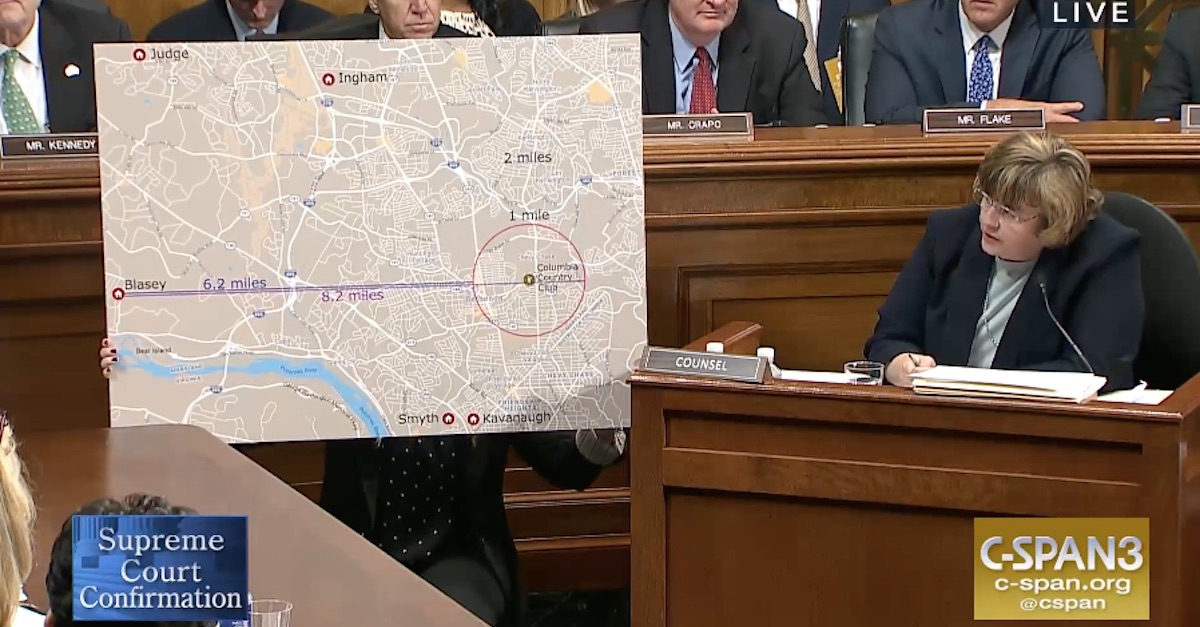 Republican lawmakers on the Senate Judiciary Committee, aware of criticism and optics surrounding “old, white men” interrogating Dr. Christine Blasey Ford on Thursday, decided to bring in a female independent counsel, in the form of veteran sex crimes prosecutor Rachel Mitchell. This was an apparent attempt to alleviate these concerns and concerns of politicization on the Committee.

While appearances of having a prosecutor question Ford has caused in some uneasiness in its own right, many are actively seeing some issues with the actual format of the hearing, which was set by the majority on the Senate Judiciary Committee (i.e. Republican senators).

In case you are not aware of the format, the idea was to have each senator on the Committee (there are 21) have five minutes each to ask Dr. Ford their questions. The senators would be able to yield their time to another senator or special counsel. Republicans were expected to, and have, yielded their time to Mitchell to ask questions in 5-minute blocks.

Law&Crime founder Dan Abrams noted on Twitter that Mitchell is in a “tough spot to have her questioning interrupted every five minutes.”

Rachel Mitchell in a tough spot to have her questioning interrupted every five minutes.

Abrams also said that Republicans would soon “realize that they are at a distinct disadvantage having a methodical prosecutor looking for subtle points” only to then see Democrats “publicly advocating and encouraging the witness at each turn.”

Many other observers saw some issues with the 5-minute format, and the appearance of this political event as trial. One of the issues is that Mitchell doesn’t have enough time to meaningfully accomplish what she seeks to do.

This format is one of the main reasons no congressional hearing really produces new information about anything ever. https://t.co/mzukYxExzd

Almost every person close to Trump who had told me having a sex crimes prosecutor question Ford was good strategy is saying they think it was a mistake after the first portion of the hearing.

Incidentally, it's impossible to effectively cross-examine someone 5 minutes at a time, so Atty. Mitchell is unlikely to have any sustained and significant impact on the credibility of Dr. Ford. Effective cross-examination just isn't something that can be interrupted in this way.

Been pointed out by many, but this format is very odd. https://t.co/dePbC0F4zh

This #KavanaughHearings format is going to be awkward. Mitchell is trying to be methodical in setting a record, but she can do it only in 5 minute chunks, intercut with Democratic questions. https://t.co/wZ7RNQl2C6

One consequence of GOP’s format for this hearing is that Mitchell pursues a single line of questions in five minute intervals, whereas the Democrats have a series of disjointed mini interactions with Dr. Blasey Ford. Public will remember the repeated image. Intentionally tilted.

Now there is a break. Commentators (I'm watching MSNBC). Mimi Rocah says she's ashamed, as a prosecutor, that Mitchell is doing this. She is trying to put Ford on trial for interrupting his appointment.

No matter what ends up happening or what the result is this #KavanaughConfirmation hearing today is a total disaster. Whoever came up with the format for this particular hearing should be reassigned to another job.

Senior editor of the Hollywood Reporter Eriq Gardner summed up this issue nicely.

I wonder whether Republicans will have to adjust strategy. Clearly, Rachel Mitchell is establishing facts and probing for inconsistencies similar to a deposition, but she may be in wrong format w/o enough time and too many interruptions to pull off whatever she's attempting.

“I wonder whether Republicans will have to adjust strategy. Clearly, Rachel Mitchell is establishing facts and probing for inconsistencies similar to a deposition, but she may be in wrong format w/o enough time and too many interruptions to pull off whatever she’s attempting.

Even Ari Fleischer, former White House Press Secretary for George W. Bush, had a caveat about the proceedings, even though he agreed that having Mitchell ask questions “makes sense.”

You can immediately see why having Rachel Mitchell ask questions makes sense. Instead of Senators who give speeches to prove their own points, Mitchell asks questions aimed at establishing facts.

The 5-minute format that keeps interrupting her is jarring. At some point, Mitchell will need to sum things up and make a point.

“The 5-minute format the keeps interrupting her is jarring. At some point, Mitchell will need to sum things up and make a point,” he said.

Matt Walsh chimed in to say that Mitchell is “trying to ask relevant questions” but that “every time she gets somewhere, Democrats jump in to give a campaign speech.”

Mitchell is trying to ask relevant questions. Every time she gets somewhere, Democrats jump in to give a campaign speech. This is ridiculous.

“This is ridiculous,” he said.

As University of Texas law Prof. Steve Vladeck noted, however, this format was “set by the majority.”

Five-minute rounds of questioning were set by the majority, but whatever. https://t.co/m9rThwVkoX