George H.W. Bush’s Alleged Groping Was Bad. His Publicist’s Response is Beyond Disturbing. 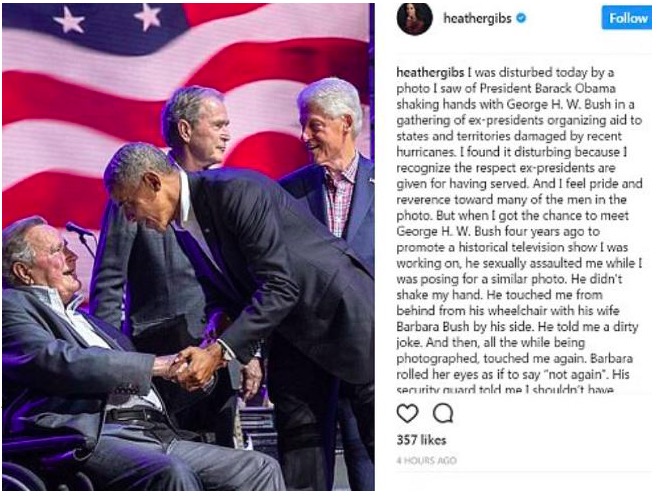 Can we talk about this George H.W. Bush thing for a minute? We’ve now got two women — Heather Lind and Jordana Grolnick — with the same story about the wheelchair-bound former-POTUS. They posed with Bush for a photo op, he joked that his favorite magician was “David Cop-a-Feel,” and he unceremoniously grabbed each woman. Yuck. And here’s the best part: Bush’s people have responded by essentially saying, “Oh yeah, he always does that, because he thinks it’s charming. Sorry the girls didn’t agree.”

According to Lind and Grolnick’s account, grandmotherly Barbara Bush wasn’t even shocked enough to clutch her famous pearls. Her response? She stood by, noticed her husband allegedly groping the young women, and laughed that, “he’s going to get himself put into jail!” [Sidebar: she’d better hope not, because, to paraphrase now-famous meme, a good rule for avoiding sexual violence might be, “if you’re a man, don’t treat a woman on the street the way you wouldn’t want a man treating you in prison.”]

Before we go further, let’s be totally clear. What Bush 41 is accused of doing to those women was absolutely, unequivocally, sexual assault under most statutes. Such laws generally have two components: 1) touching in a sexual area; 2) absence of consent. Buttocks are always considered a “sexual area,” and it sure seems like we’re missing any consent here. That said, plenty of people rightfully recognize that assault or not, these incidents would hardly be considered severe. Good news! The law, both criminal and civil, already accounts for a wide spectrum of bad behavior. In either a civil lawsuit or a criminal prosecution, if a person were found liable for the kind of touching that Bush is accused of, they’d likely get minimal, if any, punishment.  By contrast, a person who committed a more invasive sexual assault could face jail time and huge civil penalties. None of that should be surprising or even controversial.  Neither the law nor anyone with a modicum of common sense has ever argued that every sexual assault is equal to every other sexual assault.

What is beyond disturbing, however, are people’s attitudes toward Heather Lind and Jordana Grolnick; most significantly of all is President Bush’s publicist.  Bush spokesperson Jim McGrath provided the following statement to the media:

“At age 93, President Bush has been confined to a wheelchair for roughly five years, so his arm falls on the lower waist of people with whom he takes pictures. To try to put people at ease, the president routinely tells the same joke — and on occasion, he has patted women’s rears in what he intended to be a good-natured manner. Some have seen it as innocent; others clearly view it as inappropriate. To anyone he has offended, President Bush apologizes most sincerely.”

If a spokesperson for one of my clients made such a statement, I’d have him fired immediately. Not only does the statement admit to assaults on Lind and Grolnick, but it admits a regular pattern of similar harassment and assault.  Plus, it actually says that it was intentional. The idea that groping unsuspecting women is some sort of “good-natured” greeting is odious; the suggestion that the problem lies with “others” who choose to be offended by its inappropriateness is grotesque.  Fail, on the coms front, Mr. McGrath.

Since the advent of the #MeToo social media campaign, we’ve seen thousands of women come forward with personal stories of varying gravity. Almost immediately, critics emerged, complaining that those who share stories of less serious incidents of assault or harassment are minimizing the “real” assaults of others; after all, if everything is offensive, then nothing is. In principle, that’s certainly true. But here, we’re not talking about “offensive” behavior, like a late RSVP or a missed thank-you note. We’re talking about possibly illegal, abusive, and predatory behavior. I’ve never heard anyone criticize a mugging victim because her purse wasn’t all that valuable. I’ve never heard anyone criticize a fraud victim because he only lost a little money. I’ve never heard anyone argue that we shouldn’t prosecute a stalker because the victim didn’t emerge with PTSD. And yet, communications professionals on behalf of former presidents are perfectly comfortable expecting the entire American public to blame young women for being unfair troublemakers when they failed to be amused by being groped by an old man.

Jordana Grolnick’s statement on her long-delayed decision to come forward says it best:

“I think I should have been a little more alarmed to be touched so inappropriately by a man who was once the leader of the free world. I realize that making light of the situation was the wrong move. It wasn’t ok for him to do that to me.”

Note: she didn’t say it was the same as rape. She didn’t say Bush should go to jail, pay her, or be punished. She just said “it wasn’t ok,” and that’s because it wasn’t.