George Conway Erupts After Nikki Haley Defends Rep. Stefanik and Criticizes Him: You Said Trump Was a ‘Truthful’ Man 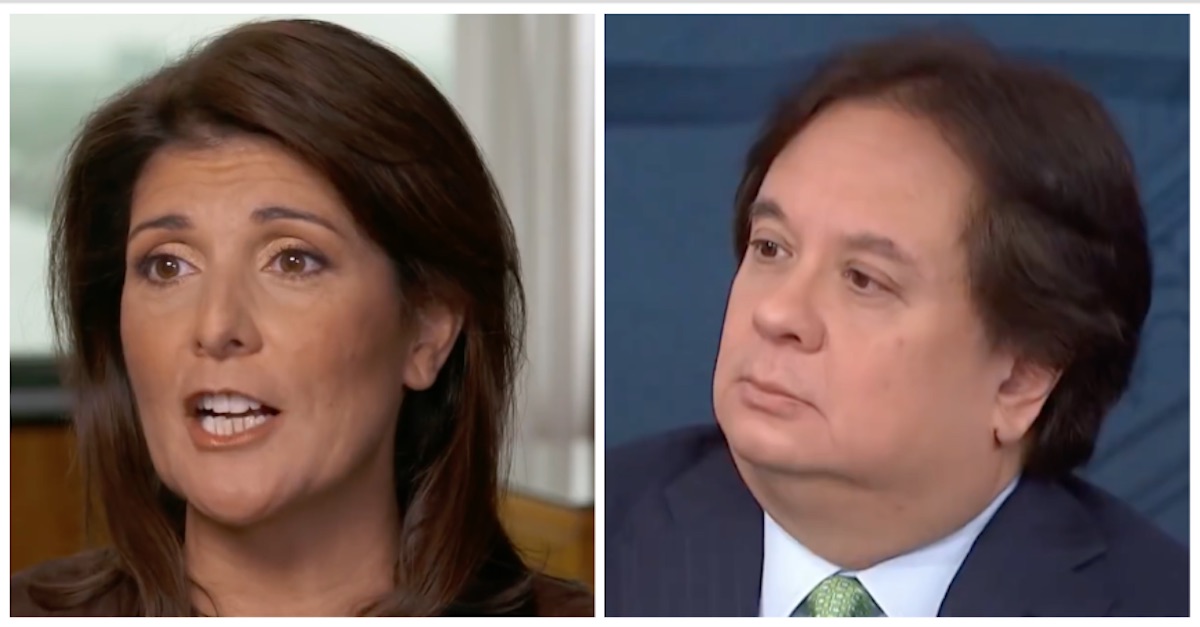 This is absolutely uncalled for and disgusting. What is wrong with people? George Conway is the last person that can call someone “trash”. #Pathetichttps://t.co/gMvEzxm3RC

“This is absolutely uncalled for and disgusting. What is wrong with people? George Conway is the last person that can call someone ‘trash’. #Pathetic,” Haley said, sharing a link to Townhall article about Conway’s recent Twitter criticisms of Stefanik.

Oh, @NikkiHaley, just the other day you said that the world’s biggest pathological liar, @realDonaldTrump, was a “truthful” man. *That’s* the very essence of disgusting, trashy, and pathetic—utterly shameless and transparent dishonesty. https://t.co/xX0bf9uwpH

“Oh, @NikkiHaley, just the other day you said that the world’s biggest pathological liar, @realDonaldTrump, was a ‘truthful’ man. *That’s* the very essence of disgusting, trashy, and pathetic—utterly shameless and transparent dishonesty,” Conway shot back.

Then came the follow-up accusation.

You’ll say anything to get the vice-presidential nomination, won’t you, @NikkiHaley? https://t.co/Jjrn7vZTXF

“You’ll say anything to get the vice-presidential nomination, won’t you, @NikkiHaley?” he asked.

And then came basking in the afterglow of the ratio.

In case you missed it, Conway continued his criticism of Stefanik’s Friday performance into the weekend. Stefanik broke impeachment inquiry rules and attempted to question witness Marie Yovanovitch out of turn. Stefanik was repeatedly shut down by House Intelligence Chairman Rep. Adam Schiff (D-Calif.) when she broke the rules, and Stefanik subsequently claimed that she was silenced because she is a Republican.

As Law&Crime previously reported, Conway was not pleased about the stunt.

“Nonsense,” he tweeted. “You went to Harvard. You can read. You knew full well that the operative resolution (H.Res. 660) only allowed questioning by the ranking Republican or Republican counsel at that point, and that you’d get your turn later. You pulled a stunt to gaslight the public.”

The GOP rallied around Stefanik. President Trump retweeted several videos of Stefanik’s time before the microphone. As it turns out, however, Stefanik received the second-most amount of time after Ranking Intelligence Committee Member Devin Nunes (R-Calif.), as Conway also noted.

The impeachment inquiry rules resolution was clear on the point of questioning witnesses:

House members usually have five minutes each to address witnesses. The impeachment inquiry, however, sets aside those five-minute blocks of questioning until the tail-end witness testimony.

“At the conclusion of questioning pursuant to this paragraph, the committee shall proceed with questioning under the five-minute rule pursuant to clause 2(j)(2)(A) of rule XI,” the slightly-altered rules note.

“[Elise Stefanik] is lying trash,” he said, urging the public to give to Stefanik’s Democratic opponent Tedra Cobb.

Conway’s onslaught did not stop there. He later shared a fake photo of Stefanik flipping the bird and deleted the tweet. He then quote-tweeted and responded to the Daily Caller when the website said “the internet lasts forever” (i.e. the internet would not forget his tweet of the fake photo).

“And so does the fact that @EliseStefanik brazenly lied to the public, which is much worse than flipping the bird. Care to tell your readers about that?” Conway asked.

“But the fact that she shamelessly and brazenly lied in a ridiculously trashy gaslighting stunt is indisputably real,” he added in separate tweet after a reporter noted the photo of Stefanik was a fake one.