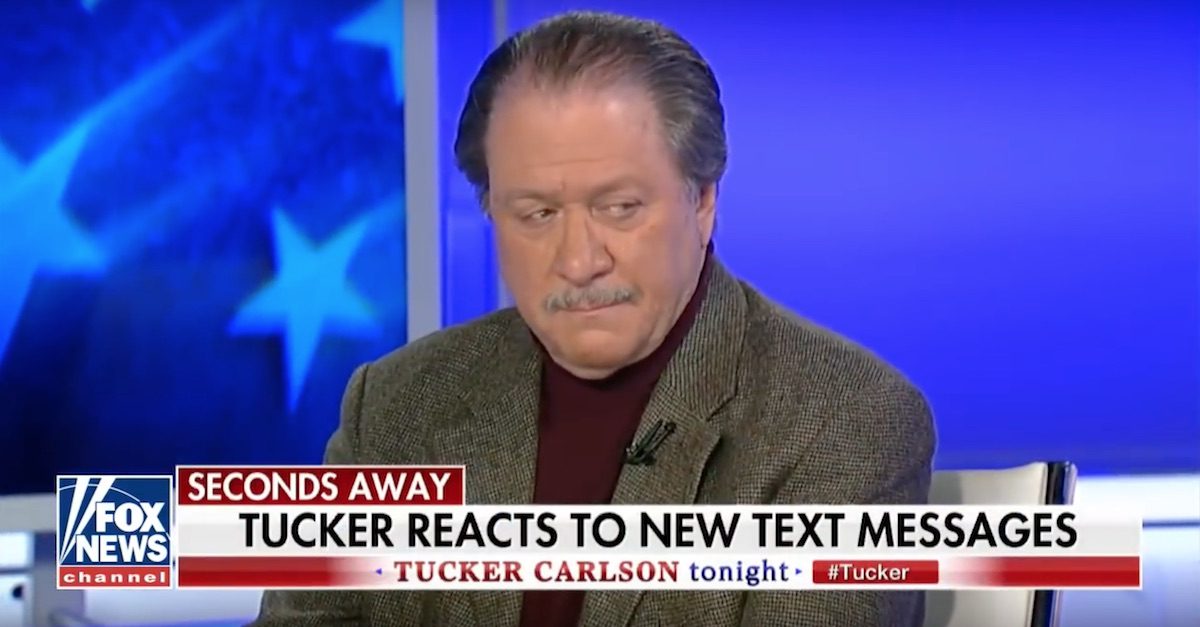 A former federal prosecutor on Monday said the whistleblower who filed the initial complaint against President Donald Trump for his communications with Ukrainian president Volodymyr Zelensky was committing a “political assassination.”

“This is a political assassination. This is a decapitation of a president. This is regicide,” diGenova said, ironically using a term that specifically refers to the killing of a king. “This has nothing to do with the lawful processes of the U.S. Constitution. Exhibit A: They don’t want us to identify the key person who made the accusation that started the impeachment process.”

Despite diGenova’s claims, the whistleblower followed all of the protocols required under the law in reporting concerns about the president’s Ukraine communications, a fact Trump’s own Acting Director of National Intelligence Joseph Maguire confirmed to Congress in September.

DiGenova went on to name the unconfirmed person alleged to be the whistleblower — a move many have warned could put that person and their family at risk of harm — before backing off and instead branding the whistleblower as a modern day version of John Wilkes Booth, the assassin who killed President Abraham Lincoln.

“The whistleblower slash anonymous informant, his name is as follows: John Wilkes Booth. That’s the name of the informant,” he said. “He worked at the CIA, and he is part of a political assassination. It’s now underway, and all of the listeners should realize that that’s what this is about. This is a fraud on the Constitution and a fraud on the American people.”

Fox News revealed in September that diGenova and his wife Victoria Toensing, who is also an attorney, had been working “off the books” with the president’s personal attorney Rudy Giuliani to get damaging information on former Vice President Joe Biden from Ukrainian officials.

“According to a top U.S. official, all three were working off the books apart from the administration,” Fox News anchor Chris Wallace reported. “The only person in government who knows what they were doing is President Trump.”

DiGenova and Toensing represent Ukrainian billionaire Dmitry Firtash—a key figure in the ongoing Ukraine phone call and impeachment scandal–and John Solomon, the journalist instrumental in pushing several Ukraine-related stories metabolized by President Trump as potential sources of dirt on his political opponent Joe Biden and Biden’s son Hunter. After Solomon announced he was leaving The Hill to “build [his] own startup media company,” Fox News hired Solomon as a contributor.