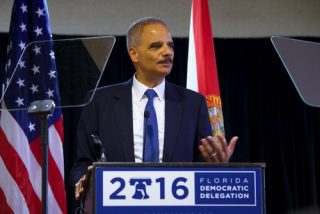 Former U.S. Attorney General Eric Holder, who served from 2009 to 2015, penned a scathing opinion piece in The Washington Post taking aim at FBI Director James Comey.  He said that Comey’s decision to write a letter to Congress on Friday which informed them of newly discovered Hillary Clinton emails is a violation of long-standing DOJ policies.

“The department has a practice of not commenting on ongoing investigations. Indeed, except in exceptional circumstances, the department will not even acknowledge the existence of an investigation. The department also has a policy of not taking unnecessary action close in time to Election Day that might influence an election’s outcome,” Holder wrote. He said these policies are put in place so as not to cast a “public suspicion on public officials who have done nothing wrong.”

Holder went further, saying that not only did Comey violate these policies, he “negatively affected public trust in both the Justice Department and the FBI.” Interestingly, Holder also took aim at Comey for holding a July news conference about the Hillary Clinton investigation. He said that wasn’t the FBI Director’s place.

He ended the piece saying “I served with Jim Comey and I know him well. This is a very difficult piece for me to write. He is a man of integrity and honor. ” Holdey said Comey made a “mistake.”