Did Republicans in North Carolina Commit ‘Even Worse’ Ballot Fraud in Another Race? 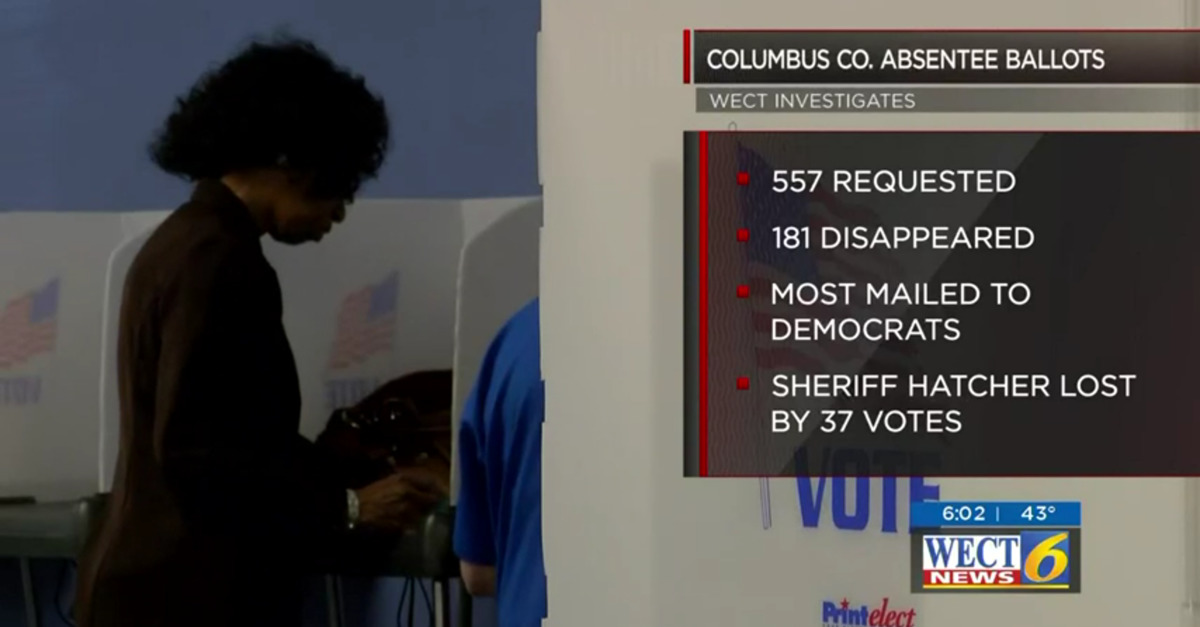 For two weeks, national attention has focused on allegations of GOP-engineered election fraud in North Carolina’s 9th district congressional race between Republican Mark Harris and Democrat Dan McCready. A new report by media in the Tarheel State, however, suggests that the alleged ballot harvesting operation conducted by McCrae Dowless impacted one race for sheriff as well.

According to WECT TV6, the scale of absentee ballot fraud in “Columbus County may be even worse,” than what’s already been alleged and documented in nearby Bladen County. Reporter Ann McAdams notes that nearly one-third of absentee ballots requested in Columbus County were never returned to North Carolina’s Board of Elections during the 2018 midterm election.

Such high numbers rival those not returned in the Harris-McCready race–numbers which originally set the ninth congressional district investigation into motion.

In North Carolina, typically 80-90% of requested absentee ballot requests are returned. During the last midterm election in 2014, Columbus County voters returned 86% of such ballots–during an election season which attracted little national or local interest. The prospect of voters intentionally returning only 68% of absentee ballots during a hard fought race conducted against the highest turnout U.S. midterm election in modern history has observers convinced something else–and untoward— was going on in Columbus County this year.

And those missing ballots likely proved instrumental in the Columbus County race for sheriff.

Incumbent Democratic Sheriff Lewis Hatcher ran against Republican Jody Greene. Hatcher went on to lose that race by just 37 votes. A close and bitter loss due to bad luck? Maybe. Maybe not.

According to a WECT survey of campaign finance records, Greene’s campaign paid Dowless’s Red Dome Group at least $4,300 during the closing months of the general election for “consulting for the campaign.”

Red Dome was subpoenaed by North Carolina’s State Board of Elections and Ethics Reform on November 30 over allegations that Dowless and his staff disenfranchised Democratic Party voters by intentionally destroying and altering their absentee ballots in the Harris-McCready race. Since that investigation began, workers employed by Dowless have admitted to illegally collecting absentee ballots from voters in violation of North Carolina law.

According to a Columbus County elections official interviewed by WECT, Dowless was constantly in contact with the Columbus County Board of Elections. Again, the outlet, “Dowless regularly requested poll books and Certificates of Report, which detail the names of people who have already voted, where they voted, and absentee voters by precinct.”

Greene later confirmed that Red Dome was paid to conduct an absentee ballot get-out-the-vote operation. But the incoming sheriff disputed that he ever personally interacted with Dowless himself. Rather, Greene claims, his point person at Red Dome was a man named Andy Yates.

“I haven’t dealt with him. We did not hire McCrae Dowless,” Greene said–and added in some displeasure with their electoral work as well. “The company did not do what they said they were going to do for us by any stretch of the imagination.”