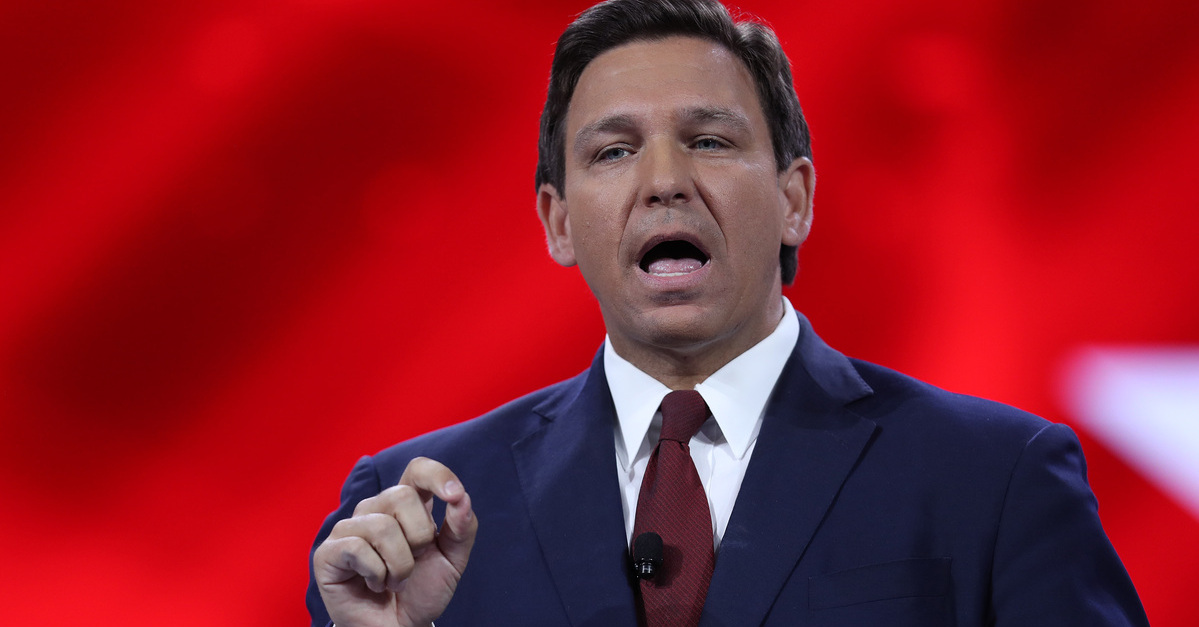 An advocacy group wants Florida Gov. Ron DeSantis (R) to disclose all of his office’s press communications about his widely-criticized decision to bar all media–except for Fox News’ flagship morning program Fox & Friends–from a signing ceremony for a new voting bill.

The live broadcast made Fox the sole network to witness the governor formalizing the Sunshine State Republican Party’s latest wave of voting restrictions via SB 90, an omnibus piece of legislation that opponents call a “voter suppression bill” premised on former president Donald Trump‘s “dangerous lie” of fraud during the 2020 election. The law ratchets up voter ID requirements, throws new hurdles in the way of mass mailing and collection of ballots, and decreases drop box availability.

As Law&Crime previously reported, press freedom advocates denounced the decision to give the conservative media network exclusive access to the signing ceremony.

On Friday, the progressive non-profit People for the American Way filed a formal open records request under Florida law looking for “all records and communications leading up to the planning and execution” of the event, according to a press release.

“It’s bad enough that Ron DeSantis and far-right politicians in Florida are trying to rob Floridians of their right to vote,” PFAW President Ben Jealous said in a statement. “But in making the signing of a voter suppression bill the highlight of a Fox News morning talk show, DeSantis’s antics went from deplorable to disgusting. Depriving people of their voting rights is a deeply vile attack on civil rights, and DeSantis turned it into a sleazy publicity grab.”

“We filed this FOIA request because the people of Florida deserve to know the rationale behind DeSantis’s actions, including the reasons why other press were excluded from the event,” Jealous added. “We, and they, could make a pretty good guess, but we’d rather just know the facts.”

Filed under the public records section of the Florida Constitution, the request asks for “an opportunity to inspect or obtain copies of all records, including but not limited to emails, texts, and other forms of electronic communication” related to the “event at Club 45 in West Palm Beach from which all media—including The FLORIDA Channel, the state’s taxpayer-funded television channel of record—were excluded” except for Fox News.

The group also requested a fee waiver for disclosure of the requested information because, they claim, it is “likely to contribute significantly to public understanding of the operations or activities of the government, making the disclosure a matter of public interest,” according to the letter addressed to DeSantis.

“The people of Florida have a right to know if their governor is deliberately using his office for a self-serving publicity stunt at the same time he is signing away his constituents’ constitutional rights,” said Stan Adele, the director of the group’s Right Wing Watch project. “And the timing can’t be ignored; DeSantis is expected to announce his bid for re-election soon, and the governor is believed to have presidential ambitions. So he chose a very specific and national audience before which to display his bona fides in advancing the false narrative of widespread voter fraud in order to disenfranchise Floridians. We look forward to finding out more about how and why this event was planned.”

DeSantis’s office did not immediately respond to Law&Crime’s request for comment.