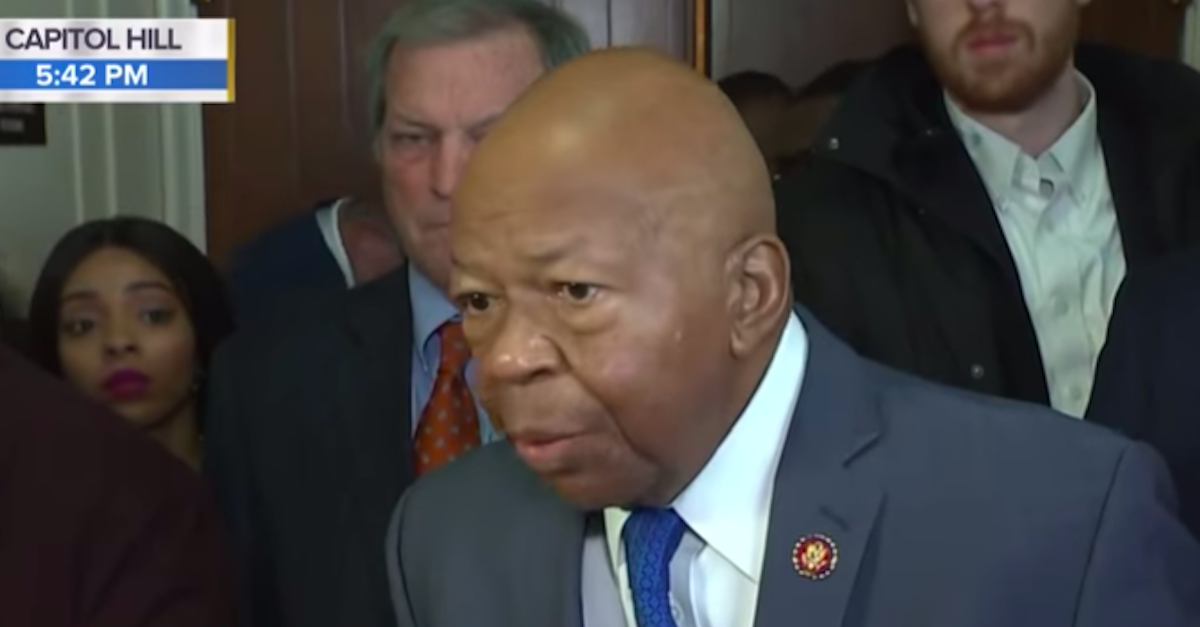 The House Oversight Committee has been on a mission to get records pertaining to the security clearance process for members of President Donald Trump‘s administration and transition team, but the White House counsel’s office hasn’t been as cooperative as they’d like. On Friday, Committee Chairman Rep. Elijah Cummings (D-MD) sent a letter to Counsel to the President Pat Cipollone, expressing his frustration over the matter in light of a New York Times report that said that Trump has spoken falsely about this process in the past.

Cummings stated that he has been “negotiating in good faith” over these records ever since he first contacted Cipollone’s office on Jan. 23.

“However, over the past five weeks, the White House has stalled, equivocated, and failed to produce a single document or witness to the Committee,” Cummings’ said in his March 1 letter. He went on to say that the administration has failed to provide “any information regarding the security clearance of any specific White House official, and the President has asserted no constitutional privilege to withhold this information from Congress.”

Cummings referred to the Times report that said Trump himself overruled White House officials who advised against granting security clearance to the president’s son-in-law Jared Kushner. Despite concerns raised by the CIA and FBI, Trump reportedly ordered then-Chief of Staff John Kelly to grant that clearance.

Cummings also pointed out that the report contradicted what Trump said in an interview with Times reporter Maggie Haberman. A transcript of the interview, included in the letter, shows Trump response to Haberman after she asked if he told Kelly or anyone else “to overrule security officials.”

Trump responded by saying, “No. I don’t think I have the authority to do that. I’m not sure I do.”

Haberman then pointed out that Trump does have the power to do this, but the president still denied doing it.

“But I wouldn’t. I wouldn’t do it.” He then said, “I was never involved in the security.” Ivanka Trump also said her father had no role in this.

Cummings said the latest reporting “raise[s] grave questions” about what officials learned about Kushner that made them recommend not granting the clearance. He also wants to know “why President Trump concealed his role in overruling that recommendation,” and why officials like Kelly and former White House counsel Don McGahn reportedly documented what happened.

The letter to Cipollone illustrated how the White House counsel’s office has been difficult in the past. Cummings said that after the first time he asked for information, Cipollone’s office “seemed to completely disregard” a Jan. 23 letter that laid out why the Oversight Committee was investigating the matter. After a subsequent letter provided more information, the White House counsel’s office wrote back challenging the Committee’s jurisdiction and authority over the issues involved.

Cummings is now requesting the Cipollone comply by Monday, March 4.