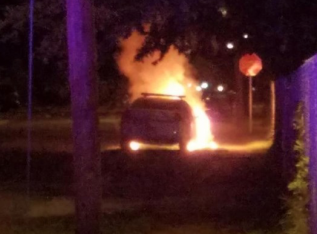 A Daytona Beach police cruiser was firebombed early Sunday morning in what investigators say may be related to the recent uptick in anti-police rhetoric and violence around the country.  Investigators reportedly found a note referencing Black Lives Matter and the deaths of Alton Sterling and Philando Castile at the scene.

Daytona Beach Police Chief Mike Chitwood told the Daytona Beach News-Journal the incident occurred at approximately 2:00 AM EDT on Sunday night.  Fire completely engulfed the police cruiser and the vehicle was a total loss.  Chitwood said they were still investigating what the perpetrators used to start the fire, but it was most likely a Molotov cocktail.  There are currently no known suspects, but if caught, those responsible for the firebombing would likely face arson charges and charges related to destroying a police vehicle, Chitwood told the newspaper.

A note found at the scene reads, “Black Lives Matter A. Sterling P. Castile F[***] the police.”  However, Chitwood said it is too early to say for sure whether the incident is related to other anti-police incidents that have occurred across the country recently.

“I really do believe in my heart of hearts that we have a really great rapport with our community overall. They know that if there’s a problem, they can come and talk to us,” Chitwood told the newspaper. “But there is a radical, small percentage that I think is trying to drive a wedge between all of us.”

The police cruiser was reportedly parked outside a mosque as a protective measure in the aftermath of the Orlando shootings.  The vehicle was empty at the time of the incident.  An unidentified neighbor who lives near the location told the newspaper in an email statement that they heard a “boom” noise and the sound of broken glass before looking outside to see the cop car on fire.

“The police car has been parked there since the Orlando shootings. They move it every now and then but it’s always empty,” the neighbor said in an email statement.  “My boyfriend called 911 and it took so long before they got there that by the time they did the entire car was covered in fire. It took a bit to get the fire out.”