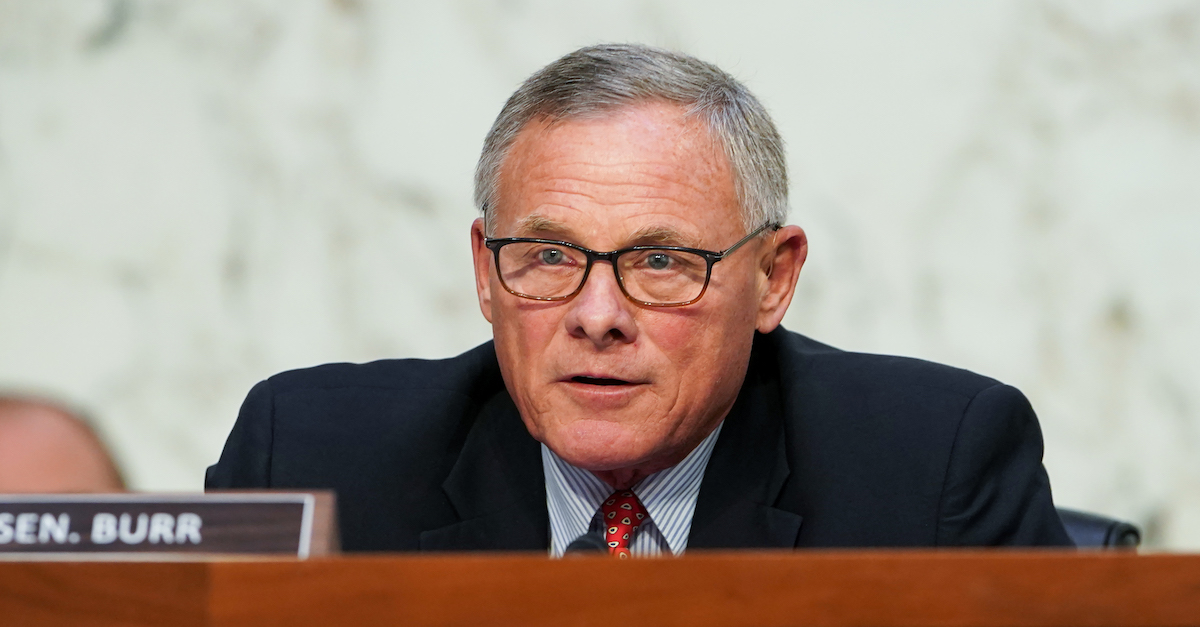 A D.C. appellate court has overturned a ruling that blocked a major newspaper’s access to documents related to a federal investigation into stock sales by Sen. Richard Burr (R-N.C.) shortly before the coronavirus pandemic exploded.

In 2020, federal investigators began looking into whether Burr illegally used information from coronavirus briefings to sell $1.65 million in stock in February of 2020. The Justice Department obtained a warrant to search Burr’s phone in connection with that investigation, the Los Angeles Times reported.

ProPublica had reported in March of 2020 that Burr had “sold off a significant percentage of his stocks, unloading between $628,000 and $1.72 million of his holdings on Feb. 13 in 33 separate transactions.”

“As the head of the intelligence committee, Burr, a North Carolina Republican, has access to the government’s most highly classified information about threats to America’s security,” the ProPublica report said. “His committee was receiving daily coronavirus briefings around this time, according to a Reuters story. A week after Burr’s sales, the stock market began a sharp decline and has lost about 30% since.”

The L.A. Times, citing documents filed with the Office of Government Ethics, reported in May of 2020 that on the same day Burr sold his stocks, his brother-in-law, Gerald Fauth, “sold between $97,000 and $280,000 worth of six stocks.”

Chief U.S. District Judge Beryl Howell denied the L.A. Times‘ request in May of 2021, saying that privacy and government interests outweighed the public’s right to access.

In an opinion issued Friday, a unanimous three-judge panel on the U.S. Court of Appeals for the D.C. Circuit remanded, saying that Howell hadn’t properly applied the necessary factors in determining whether to order the documents released. The judges also ordered Howell to consider “new disclosures from a related investigation” that came to light after her May 2021 order.

In an opinion written by U.S. Circuit Judge Judith Rogers, a Bill Clinton appointee, the judges noted that disclosures made in connection with a Securities Exchange Commission investigation into Fauth essentially confirmed the existence of the investigation into Burr, undercutting the privacy need cited by Howell.

Rogers, joined by Patricia Millett, an Obama appointee, and Gregory Katsas, a Donald Trump appointee, also found that the alleged search warrant materials, as well as the government’s opposition to the L.A. Times‘ request, were “judicial documents” intended to “influence a judge’s decisionmaking” to which the common law right of access attaches.

That right of access creates a “‘strong presumption in favor of public access to judicial proceedings,’ but ‘that presumption may be outweighed by competing interests,'” the opinion said.

Those interests are balanced using a six-factor test that considers the following factors, known as the Hubbard factors:

The appellate judges said that Howell should reconsider the Hubbard factors in light of the details that were released after Howell issued her opinion in May.

“To the extent the hypothesized search warrant materials exist and any materials contain details that were not public when the district court denied L.A. Times’ motion to unseal, the district court should reconsider whether sealing is still justified in view of the Hubbard factors or whether redaction would be an appropriate alternative,” the opinion said.

The judges went further, though, and said that Howell’s analysis of the Hubbard factors was flawed separate from the later-revealed information.

Howell, the court ruled, fell short of providing a “full explanation” of her analysis of the need for public access.

“Without further elaboration on the nature of the public interest that the district court found to be outweighed by the privacy and government interests, this court will be unable to determine whether the district court acted properly within its discretion,” the opinion said.

The appellate court said that in considering the privacy interests at stake, Howell didn’t place enough weight on the fact that Burr himself had publicly acknowledged the existence of the DOJ investigation.

“As the Supreme Court has instructed, a district court’s Hubbard analysis must consider the ‘relevant facts and circumstances of the particular case,’ which in the instant case would include the Senator’s own acknowledgment of the investigation,” the opinion said (citations omitted). “Nor did the district court address whether Senator Burr’s privacy interest was further diminished because the investigation involved actions taken by a public official in his public capacity.”

Finally, the appellate judges said that Howell failed to address the sixth Hubbard factor—”the purposes for which the documents were introduced during the judicial proceedings.”

Noting that this factor may “carry great weight” when sealed documents are involved, the judges said that Howell’s apparent failure to discuss that factor “similarly frustrates appellate review of its balancing of the Hubbard factors.”

The judges remanded the case to the district court for reconsideration.

Representatives from the Justice Department and the Times did not immediately respond to Law&Crime’s emails requesting comment.