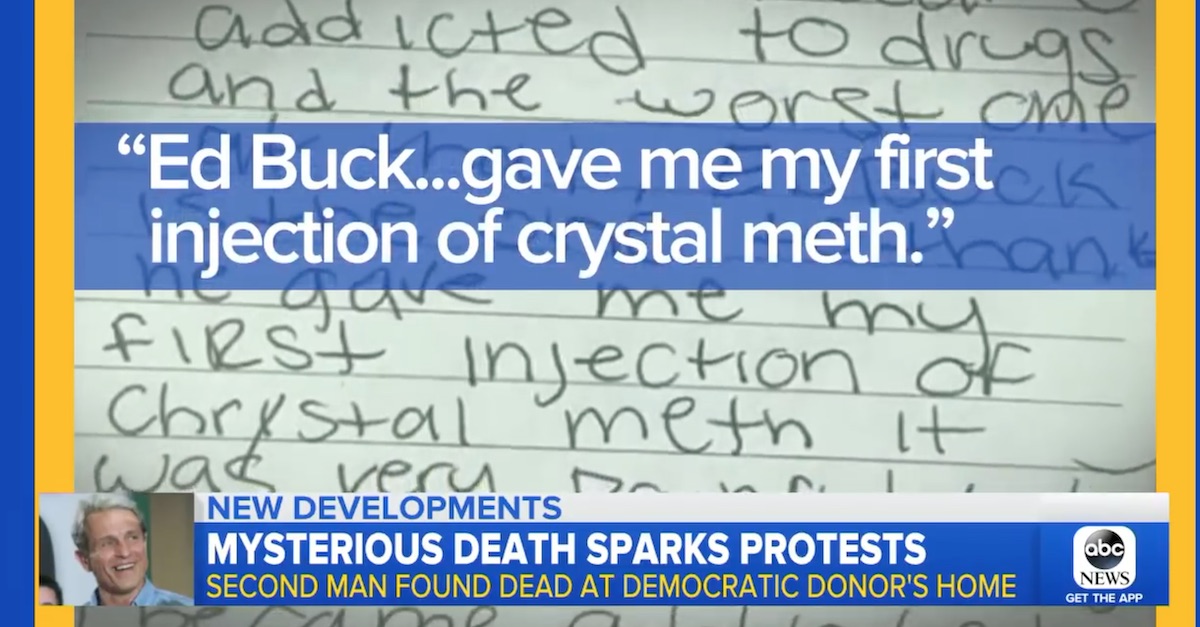 A Los Angeles coroner has confirmed that Timothy Dean, 55, died of a methamphetamine overdose. Dean died in the home of prominent Democratic Party donor Ed Buck. This was notable in itself, but Dean’s death marked the second time that a man was found dead in Buck’s home due to a meth overdose.

The Los Angeles County Sheriff’s Department announced that Dean’s Jan. 7 was “accidental” methamphetamine overdose. In 2017, Gemmel Moore, 26, was found dead in Buck’s West Hollywood home. Both deaths have been ruled accidental. Dean’s death was initially suspected as an overdose.

Both Dean and Moore were black, gay men, as protesters were quick to note. Jasmyne Cannick, a communications and public affairs strategist who worked with Moore’s family, previously called on the Los Angeles Sheriff’s Department to arrest Buck and for District Attorney Jackie Lacey to “prosecute him for murder after another young Black gay man was found dead in his West Hollywood apartment of an apparent overdose.”

Buck is a gay white man in his sixties, who is a familiar face on the political scene. According to OpenSecrets, Buck has donated tens of thousands of dollars to multiple Democratic Party candidates over the past few election cycles–including presidential contender Hillary Clinton. Buck has also been pictured alongside Clinton.

Buck once ran for elected office and has supported various progressive causes throughout the years.

Dean’s death quickly garnered attention, as Dean became the second person in 18 months to be found dead from the same cause in Buck’s home. An entry in Moore’s journal said Ed Buck got him “addicted to drugs and the worst one at that.”

“[H]e gave me my first injection of chrystal [sic] meth,” he said, according to the Los Angeles Times.

Dean’s roommate Ottavio Taddei previously came forward to say that he never saw Dean use drugs. “I lived with him, and he never did drugs. I’ve never seen him on drugs, ever,” he told KTLA.

Buck’s attorney Seymour Amster said, however, that Dean “ingested substances” before he went over to Buck’s apartment. He has also denied that Buck had any involvement in Moore’s death. Moore had been homeless and worked as an escort.

“I think it’s time to bring this tragedy to a conclusion,” he said to WEHOville in November 2018. “This was an accidental death. This was an unfortunate death … but that doesn’t mean we can make spurious accusations and spin something out of control.”

“Mr. Buck did not have anything to do with these two individuals’ deaths. These are tragedies, and we look forward to showing that in the courtroom,” Amster told the New York Daily News. Buck has denied all wrongdoing.

Others, like Moore’s mother LaTisha Nixon, filed a wrongful death lawsuit against Buck alleging “independently described […] first-hand experiences” of being injected with crystal meth by Buck inside his “drug den.”

Nixon’s attorney Hussain Turk agreed that this is “absolutely part of [Buck’s] pattern.”

“It’s consistent with what we know happens at Ed Buck’s home,” he said.