Clinton Fights Back Against Lawsuit Filed by Parents of Benghazi Victims 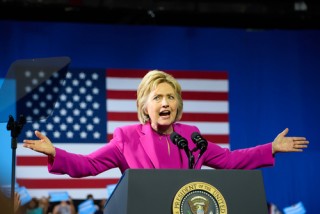 Former Secretary of State Hillary Clinton is fighting back against a lawsuit filed by the parents of Benghazi victims. Pat Smith and Charles Woods are the parents of American U.S. Foreign Service member Sean Smith, and Navy SEAL Tyrone Woods, respectively. Both died during the September 11, 2012 attack on the U.S. consulate in Benghazi, Libya. They sued Clinton for wrongful death, defamation, and intentional and negligent infliction of emotional distress.

“Secretary Clinton has borne the burden of defending against Mr. Klayman’s tactics time and again: this is at least the eighteenth time that Mr. Klayman has sued former Secretary Clinton or former President Clinton,” Clinton’s attorney wrote in a Thursday filing,  “Nearly all of those lawsuits failed before or upon a motion to dismiss and Mr. Klayman has not prevailed on the merits on a single claim over his decades-long history of suing the Clintons.”

He also takes aim at Klayman for not directly notifying Clinton’s counsel of the lawsuit, but instead improperly serving the filing to an unidentified security guard at her campaign office.

According to the lawsuit, the parents of the Benghazi victims allege that Clinton lied to them about the cause of the attack. Clinton allegedly told them in a private meeting that the attack “was the result of [an] anti-Muslim YouTube video that had been posted online and that the creator of the video would be arrested.” The complaint alleges “Clinton has negligently, recklessly, and/or maliciously defamed Plaintiffs by … directly calling them liars[.]”

Plaintiffs’ claim that Secretary Clinton is responsible for their decedent’s deaths, which has no factual particularity, is implausible, speculative, and contradicted by the FBI’s recent statement that it did not find evidence that Secretary Clinton’s e-mail account was hacked. Mr. Klayman’s assertion of this claim surely mandates an exacting scrutiny under Rule 11 of the Federal Rules of Civil Procedure. And Plaintiffs’ “defamation” claims based on Secretary Clinton’s statements about this public controversy are plainly not actionable.

Kendall is asking for the default judgment to be thrown out, and also asking that Clinton be properly served at the U.S. Department of State, because the alleged claims occurred while she was in office