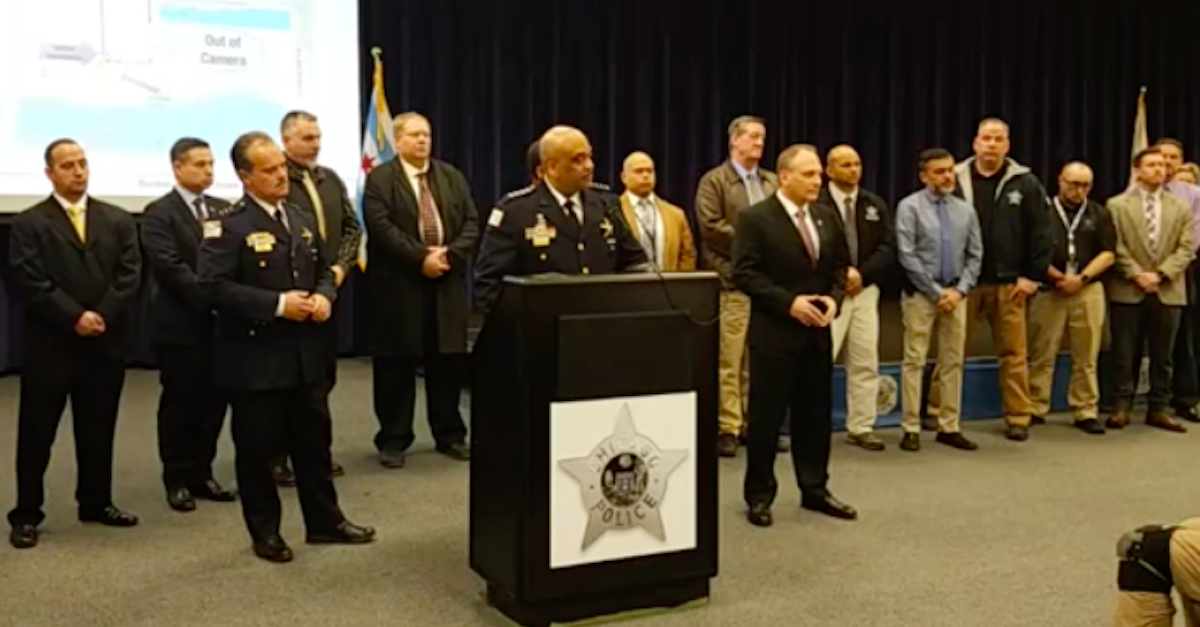 Cops in Chicago, Illinois have publicly detailed what they believe happened in the case of Empire actor Jussie Smollett. Police Superintendent Eddie Johnson said in a press conference on Thursday that the performer staged an alleged attack and pretended to be a victim. Investigators weren’t pleased when they discovered it was faked, he said.

“Quite frankly, it pissed everybody off,” he said.

Here are key highlights of what cops suggest happened.

The actor told GMA host Robin Roberts that he was out on January 29 going to get a sandwich from Subway when two men attacked him, yelled homophobic and racist slurs, put a rope on him, and poured what he believed to be bleach on him.

Smollett denied allegations he faked the attack. He said such claims “pissed” him off.

Police say the actor recruited the brothers because they were big guys, and had them fake the attack, then used a check to pay the duo.

Smollett had some scratches and bruising when police first talked to him, but nothing serious, said lead investigator Commander Edward Wodnicki. The investigator suggested these injuries were self-inflicted.

Smollett was disappointed with his salary on the show Empire, so “took advantage of the pain and anger of racism to promote his career,” said Superintendent Johnson. The actor is black and gay.

The actor allegedly also had a false letter with homophobic, racist, and political language sent to himself. Police believed that when that didn’t get attention, he escalated things and staged the attack. This was a publicity stunt, said Johnson. The superintendent complained that this case garnered way more attention than local shootings.

3. Smollett was treated as victim until “47th hour,” say police.

Johnson insisted they treated Smollett as a victim until evidence proved otherwise. Wonicki laid out the alleged timeline of how this happened.

Police said they quickly tracked down two persons of interest caught on surveillance footage. (They did not identify the men on Thursday, but the duo have been identified as brothers Ola and Abel Osundairo. Wonicki referenced their lawyer Gloria Schmidt by last name on Thursday.)

Wodnicki said the two left the scene, and later got on a flight from Chicago O’Hare airport to Nigeria with a roundtrip ticket to return on February 13. Cops picked them up when they got back and held them for as long as legally possible without charging them: 47 hours. Johnson said investigators continued to give Smollett the benefit of the doubt until evidence popped up in the last hour proving otherwise. Wodnicki claimed that the duo’s attorney had them cooperate.

Johnson suggested that Smollett recruited the brothers because of their prior relationship.

Smollett is charged with a felony count of disorderly conduct for filing a false police report. He is expected to attend a bail hearing on Thursday.