FISA warrants, the Steele Dossier, and the Democratic National Committee have been much on the minds of President Donald Trump and his former campaign adviser Carter Page on Tuesday. The president slammed former FBI lawyer James Baker—the lawyer involved in the Page FISA warrant under investigation for media leaks—in a late morning tweet.

Former FBI top lawyer James Baker just admitted involvement in FISA Warrant and further admitted there were IRREGULARITIES in the way the Russia probe was handled. They relied heavily on the unverified Trump “Dossier” paid for by the DNC & Clinton Campaign, & funded through a…

…big Crooked Hillary law firm, represented by her lawyer Michael Sussmann (do you believe this?) who worked Baker hard & gave him Oppo Research for “a Russia probe.” This meeting, now exposed, is the subject of Senate inquiries and much more. An Unconstitutional Hoax. @FoxNews

Carter Page, for his part, decided to file something timely and related to this controversy. In his lawsuit against the DNC, Page submitted “several supplementary authorities” to challenge the allegation that he has “recycled conspiracy theories” about the DNC-Fusion GPS-Dossier-FBI-FISA connection.

In fact, the first authority was a Law&Crime article about U.S. Attorney General nominee William Barr‘s statements before the Senate Judiciary Committee on Jan. 15. Reading between the lines here, Page is essentially arguing: William Barr thinks that there’s something more to investigate here, so… so much for recycling conspiracy theory. 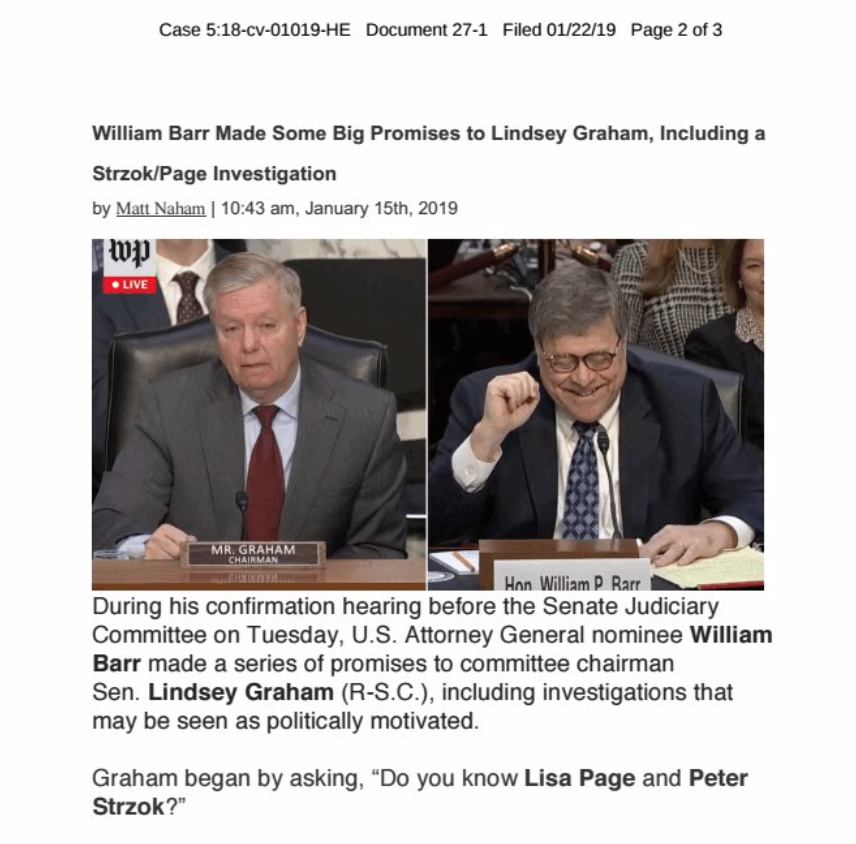 The article in question chronicled a series of promises that Barr made to Committee Chairman Sen. Lindsey Graham (R-S.C.), promises that appealed not just to Page but to Trump supporters in general.

“Do you know Lisa Page and Peter Strzok?” Graham asked. Page is a former FBI lawyer who was having an affair with since-fired FBI agent Strzok, who worked the Hillary Clinton email probe. Page and Strzok’s anti-Trump text message exchanges, in particular, fueled “witch hunt” rhetoric.

“I’ve heard their names,” Barr said. Graham read texts like, “Trump’s not ever going to become president, right? Right,” and “No, no. We’ll stop it” out loud, and then asked Barr if he would investigate. Barr said yes, and added that he was “shocked” by the Lisa Page-Peter Strzok texts. Then Barr promised to look into the Carter Page FISA warrant. Graham said that the dossier was deemed “reliable” on four occasions as a main source to monitor Page.

“Would you look into whether that was an accurate statement and hold people accountable if it was not?” Graham asked. Barr said yes—again.

Having read this, Page filed a supplemental document with Judge Joe Heaton arguing that recent events, including the Barr comments, show he isn’t making things up.

“The Defendants’ Reply Motion on Friday referred to the Plaintiff’s ‘recycled conspiracy theories.’ But as demonstrated [below], senior current and incoming officials on the Judiciary Committees of both chambers in Congress and the U.S. Department of Justice have continued to provide further evidence which refutes the Defendants’ conclusory allegations related to their illegal activities in 2016.”

Page also turned his attention to the aforementioned James Baker and Michael Sussman, the Clinton campaign and DNC lawyer who reportedly “provided documents for the Russia probe as federal investigators prepared a surveillance warrant for Trump campaign aide Carter Page.” Page says that the “criminal leak investigation related to Defendants’ alleged misconduct and conspiracy with the FBI” cast the surveillance of him in a different light.