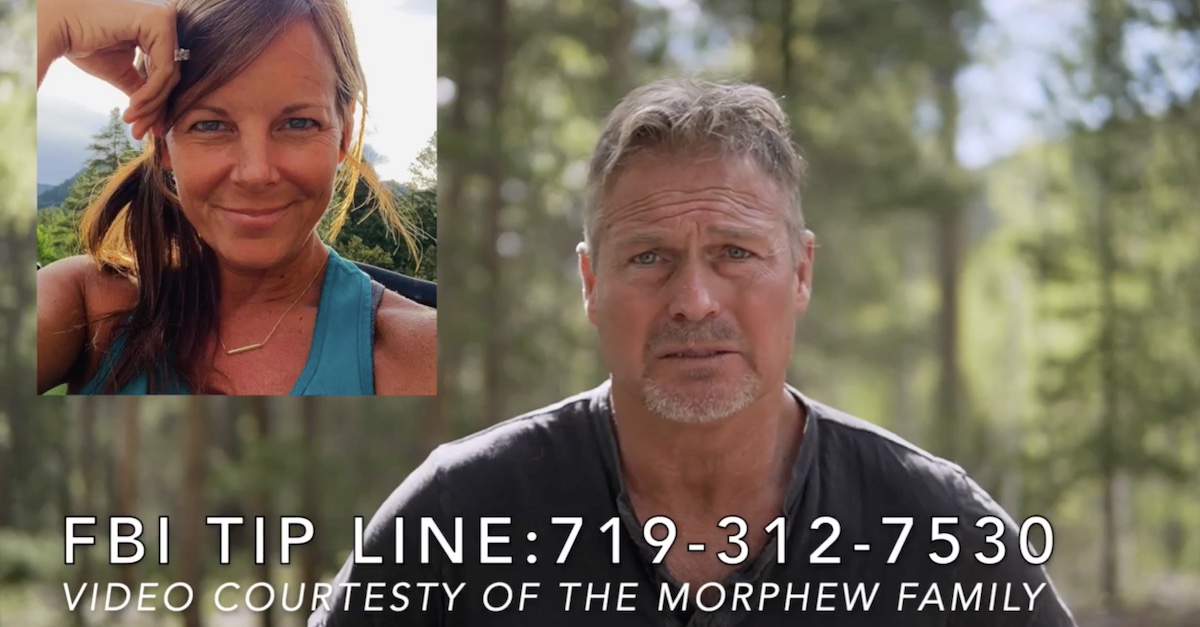 A husband who publicly pleaded in a video for his 49-year-old wife Suzanne Morphew’s safe return days after she went missing on Mother’s Day in 2020 is now charged with first-degree murder in her death. Barry Morphew, 53, faces charges of murder, evidence tampering, and attempting to influence a public servant just under a year after Suzanne disappeared. He was arrested on Wednesday.

Authorities held a press conference a 3 p.m. Mountain Time (5 p.m. EST) on Wednesday, but did not get into details about the case against Morphew.

Chaffee County Sheriff John Spezze acknowledged that he did not know Suzanne Morphew personally prior to this investigation, but he said he now knows that “those who knew her were very lucky.”

“I have learned that Suzanne loved her two daughters Mallory and Macy,” Spezze said, adding that Suzanne would do anything for her children.

Spezze said that Barry Morphew was “taken into custody near his home.” Morphew was alone at the time of his arrest and was taken into custody without incident. Spezze thanked dozens of law enforcement officials from Chaffee County, the Colorado Bureau of Investigation and the FBI for their efforts in investigating this case. Spezze said that authorities executed more than 135 search warrants and interviewed more than 400 people in multiple states.

In early April, the results of the investigation were presented to the 11th Judicial District Attorney’s Office.

DA Linda Stanley and her office reviewed the case and made the decision to move forward, the sheriff said.

“I know how deeply this case has impacted our community,” Spezze said.

DA Stanley also credited law enforcement for working day in and day out on this case.

“They never quit,” she said.

Stanley was asked by a reporter how the public could have confidence that there is a strong case against Barry Morphew if authorities won’t release the affidavit against him.

“I wouldn’t bring charges unless I was confident,” Stanley responded.

Barry Morphew is being held at the Chaffee County detention facility, the sheriff said. Morphew is scheduled to appear in court on Thursday at 10:30 a.m. Mountain Time. He has retained a lawyer.

Asked about the alleged cause of death, DA Stanley said: “Without the body, we would not be able to say that publicly.”

“We believe that she is not alive,” the sheriff added.

Stanley told frustrated reporters that her office would be putting out a news release that would include Morphew’s mugshot.

Investigators with the Chaffee County Sheriff’s Office said they first learned about the case on May 10, 2020 after a neighbor reported Suzanne Morphew missing. Morphew, a mother of two from Salida, went out for a bike ride, but did not return. A search ensued and it was soon reported that authorities found Morphew’s bike.

On May 17, 2020, Barry Morphew actually appeared in a video pleading for Suzanne’s safe return.

In light of the murder charges that were just handed down, this may remind some of how Colorado man and convicted murderer Chris Watts reacted after his pregnant wife Shanann Watts and his two daughters Bella, 4, and Celeste, 3, were reported missing.

“Shanann, Bella, Celeste … if you’re out there, just come back,” Watts said on the local news.

Bob Morphew, Barry Morphew’s uncle who lives in Indiana, told Fox 21 News in May 2020 that Suzanne was “one of the sweetest people you would ever want to meet.” The uncle rejected the idea that his nephew could have played a role in her disappearance.

“I think they can bury that kind of thought,” he said.

“They’re a loving couple and I’ve never seen any kind of unhappiness with each other or produced by either one of them,” Bob Morphew added. “What you saw on that video from Barry the other day that’s exactly Barry and that’s exactly how he feels. He loves her and he wants her back, he wasn’t putting on. I think anybody that ever knew them at any point in their married life would tell you that they were as loving of a couple as you would find anywhere.”

In Sept. 2020, allegations of foul play against Barry Morphew started to intensify.

Jeffrey Puckett, a man who was hired to do contracting work for Morphew, told Fox 21 News that a Holiday Inn room in Broomfield which Barry paid for him to stay in the weekend Suzanne disappeared reeked of “chlorine.”

“I got there Sunday night and the room smelled like chlorine real bad,” he said. “It was his room and he’d taken a shower — his towels were all over the floor.”

Puckett said he also found mail addressed to Barry Morphew in a trash can inside the room.

“My first thought was, ‘alibi.’ When I found the mail the next morning, just kinda looked like an alibi,” Puckett said.

Barry Morphew denied that there was any foul play and said that Puckett had done prison time in the past.

“I didn’t do nothing wrong in the hotel. There’s cameras all over that place. I did nothing wrong,” Morphew said. He then suggested the room may have smelled like chlorine because the hotel was taking extra cleaning precautions due to COVID-19.

“I smelled it too when I was in there,” he said.

Puckett recalled Morphew leaving the hotel in a hurry, citing a family emergency.