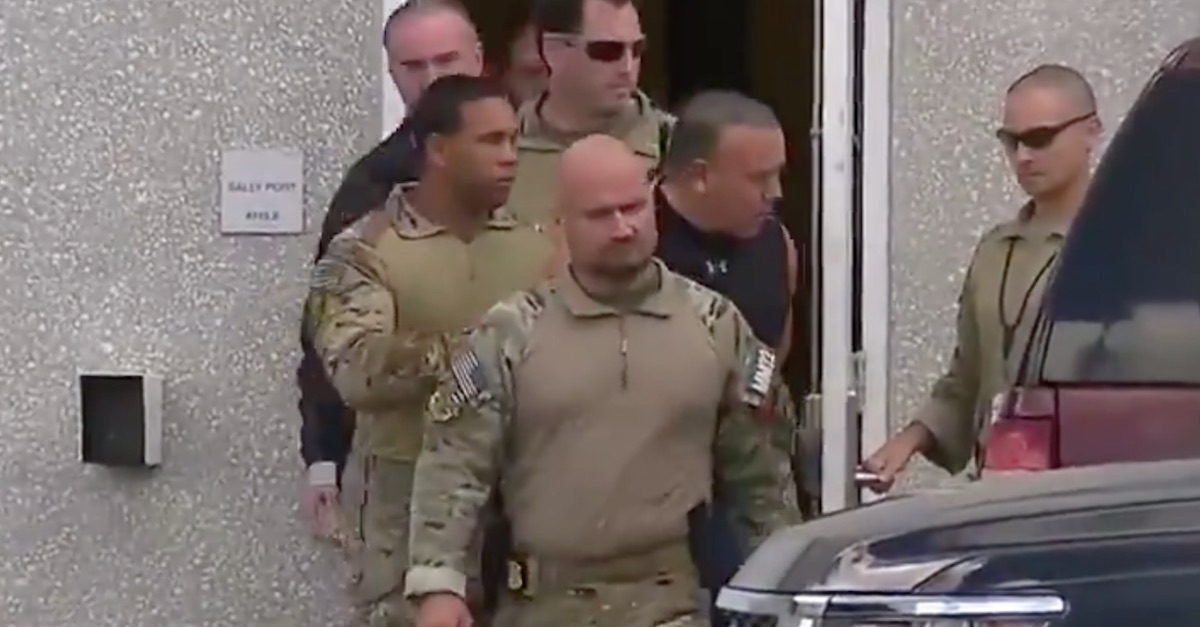 Accused “MAGAbomber” Cesar Sayoc–an avid supporter of President Donald Trump, judging by his extensive social media history–bought into the right-wing meme machine hook, line and sinker. One of many examples of this were his attacks on David Hogg, the high school student who became a household name due to his gun control activism after 17 people were shot and killed at Marjory Stoneman Douglas High School.

One of the conspiracy theories that spread far and wide was that Hogg was no high school student. They said he was a “crisis actor” and a paid protester. 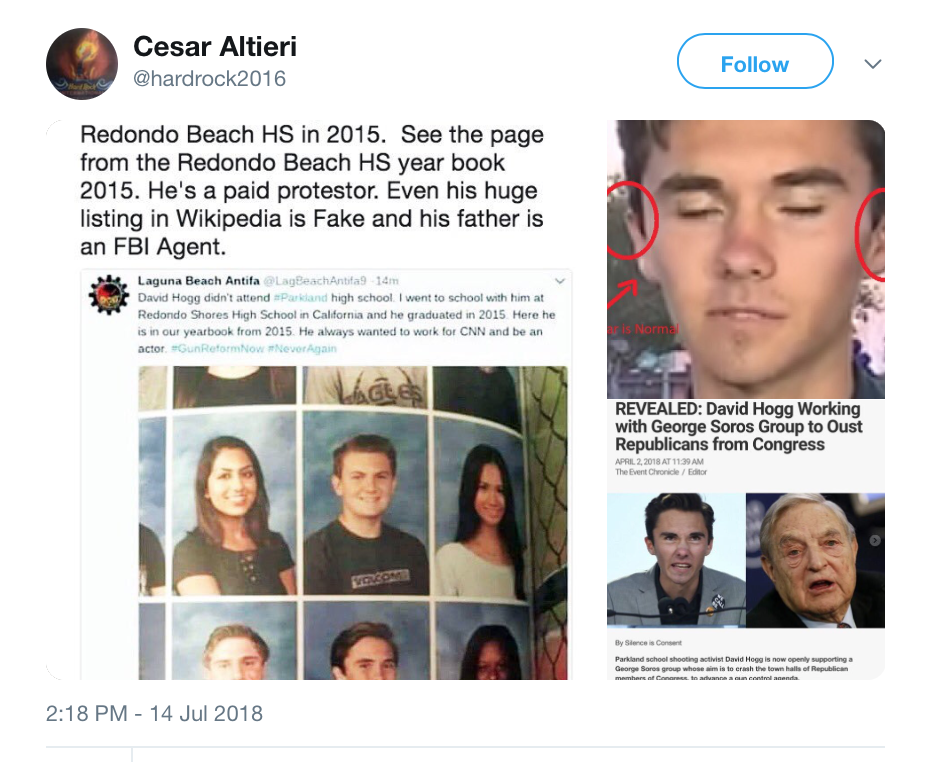 The screenshot shows that Sayoc believed Hogg was a “paid protestor,” that Sayoc shared an image purporting to show Hogg with an earpiece, and that he claimed Hogg was working closely with liberal billionaire philanthropist George Soros, one of the people Sayoc allegedly targeted with an improvised explosive device.

“David Hoggs fake phony big gets con job never attended Parkland High School. He graduated 2015 from Redondo Bch High School.He is a paid George Soros actor fraud,” Sayoc said in a tweet that has since been taken down by Twitter.

Then there were anti-Semitic tweets like this one, purporting to have uncovered the “controlled false opposition.” 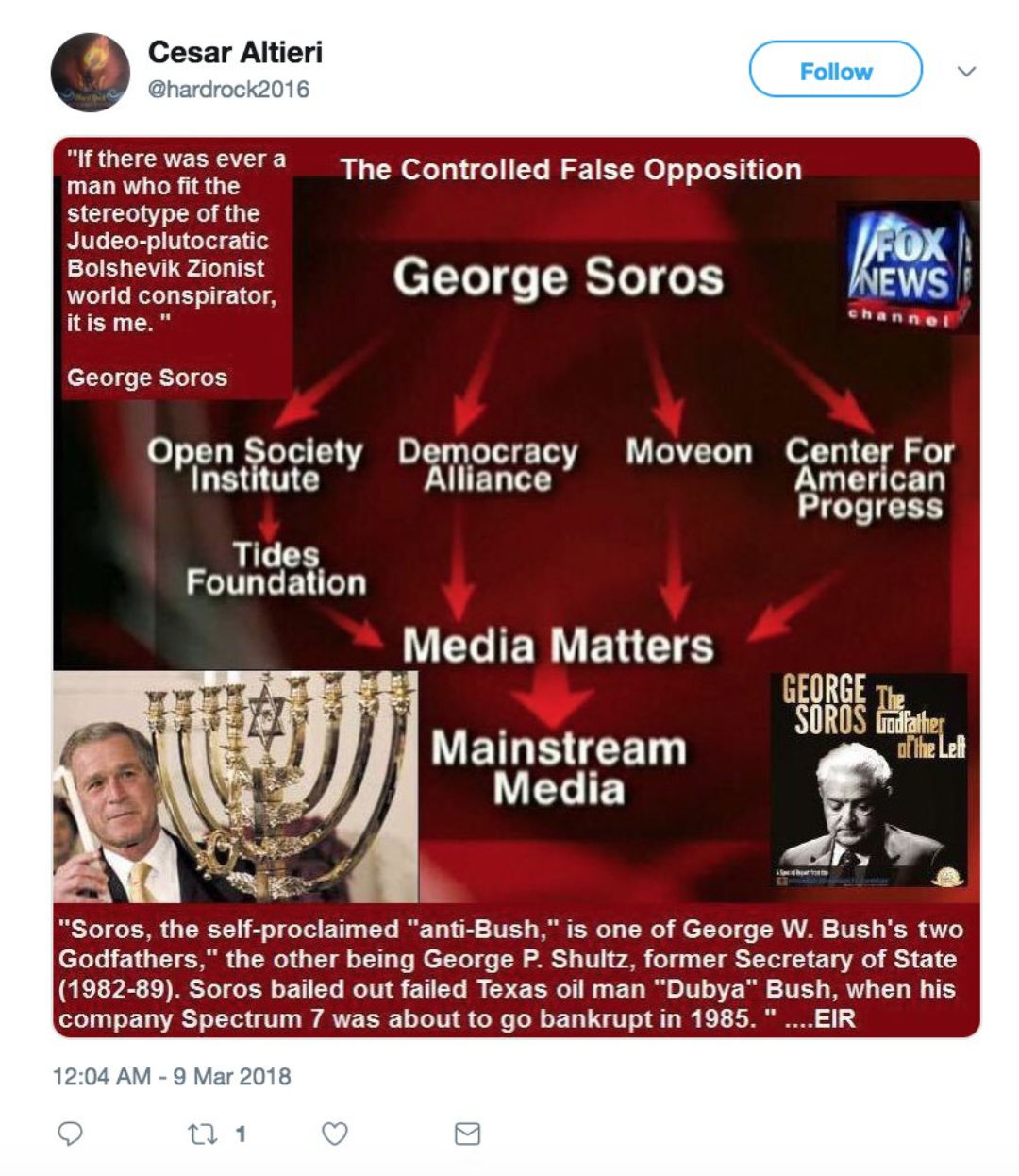 And tweets like this one: “We unconquered Seminole Tribe have [Hogg’s] real school records and real Year book.”

Much of the reported twitter account belonging to Florida man Cesar Sayoc is devoted to claiming the Parkland high school mass shooting was a hoax. pic.twitter.com/xYtILdqw0T

It really just goes on and on and on.

Here are some of the (many, many) photos shared by the page Facebook says belonged to Cesar Sayoc. Lot of right-wing memes, some car stuff, and a few chemtrails posts. pic.twitter.com/tjcZba2vDD

Sayoc has been aptly described as “extremely online.”

As Law&Crime reported earlier Friday, images from the suspect’s Facebook page more than suggested that the MAGAbomber nickname had merit.

In a few photos, Sayoc is pictured wearing MAGA hats. He appears to have attended a Trump rally in October 2016. His profile was rife with memes, whether anti-Muslim or anti-gun control.

The alleged bomber's Facebook page includes a lot of political memes, assorted selfies, and personal photos from what looks like an October 2016 Trump rally. pic.twitter.com/GaXZIXyQsV

Trump had a rally in West Palm Beach, Florida on the same day as that photo. https://t.co/XyyoJhNGlC

There's a video on the suspect's Facebook page in which he briefly films himself at that 2016 rally wearing a MAGA hat while Trump speaks behind him. pic.twitter.com/KmdDTkZuNo

He also took photos of the president at said rally.

“Go Trump Trump Trump hey Joseph Robinette Biden Jr. And Eric Himpton Holder Sr. Stick your BS all crap you talk where sun doesn’t shine . We will meet your threats right to your face soon,” one tweet said, according to the Washington Examiner.

Sayoc is a registered Republican, according to Miami-Dade records obtained by Law&Crime.