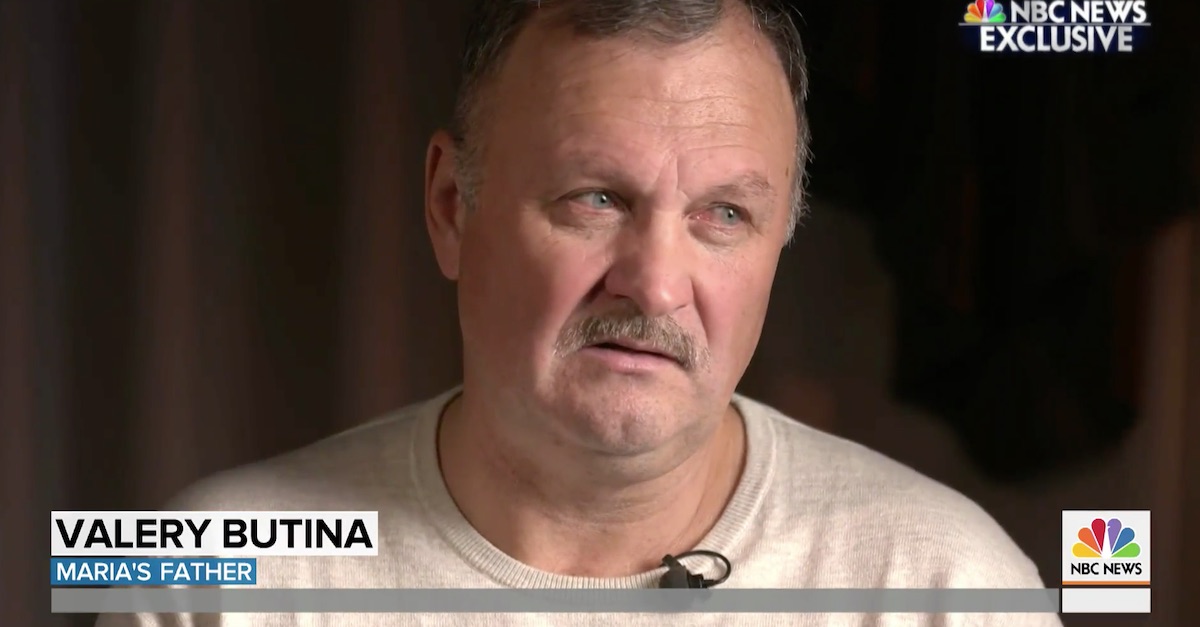 Questions continue to be raised about the past of Maria Butina, the Russian national who pleaded guilty in Dec. 2018 to conspiracy to act as a foreign agent as part of a deal that includes cooperation with the government.

Butina was arrested after an alleged attempt to influence American affairs as an illegal foreign agent by ingratiating herself among higher-ups at the National Rifle Association (NRA) to “establish unofficial lines of communication with Americans having power and influence over U.S. politics.” One of the ways Butina is said to have done this was by starting the gun rights organization, the “Right to Bear Arms.” Butina styled herself as a pro-gun activist.

Now that Butina faces five years of prison in a foreign country, her family has come forward to offer explanations. In an interview with NBC News, Valery Butin, Butina’s father, painted the portrait of a woman who was very familiar with guns and perhaps naive about the laws of a new society.

Butin claimed that his daughter’s interest in guns started when she was 10 years old and she knew how to shoot from a young age.

“She saw me working with guns and learned about [them] from childhood,” he said. “She learned how to shoot, how to assemble and disassemble a gun.” He said that Butina could put together and break down AK-47s just like many other Russian youths.

However, as pointed out in the NBC News article, this account from Butina’s father appears to conflict with an account from Butina’s gun instructor, Boris Pashchenko. He told the Associated Press that in 2011 that Butina didn’t know how to use a gun when she started her gun activism group.

“I said [to Maria Butina], ‘what about shooting?'” Pashchenko said. “Maria said, ‘I have never tried it.’ I said, ‘Come to us. Our acquaintance started with this. She came here, I gave [her] a gun, a rifle, and she tried to shoot.”

Butina’s father, on the other hand, said that she just needed to leave small town life behind and seize a new opportunity.

“At one point she grew so much that there wasn’t enough space for her in this town anymore. And when she had the opportunity to go to the capital, she took it,” he said.

Butina would eventually use a student visa to attend classes at American University. From there, she gained significant NRA contacts and access to people in positions of power. Valery Butin speculated that his daughter ended up in jail because she didn’t know “all the legal nuances.”

Butina has admitted that she traveled to the U.S. to attend an NRA convention, met members of the Republican Party and eventually asked her Russian official handler, believed to be Alexander Torshin, whether she should develop a relationship with President-elect Donald Trump‘s inner circle. Torshin, a high-ranking official of Russia’s Central Bank, is considered a political ally of Russian President Vladimir Putin.

Butina also implicated GOP operative/NRA-connected ex-boyfriend Paul Erickson in her crime. Erickson allegedly “agreed and conspired” with Butina to “establish unofficial lines of communication with Americans having power and influence over U.S. politics.” Erickson denied that he has ever done anything to hurt America. He has not been charged.

Putin responded to all of this by saying he didn’t know why Butina pleaded guilty to a lie.