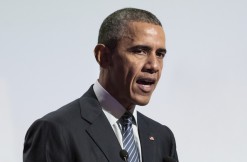 225 Democrats in Congress filed an amicus brief Tuesday on behalf of President Barack Obama’s expanded protections for undocumented immigrants. It’s part of the lead up to April 18, when the U.S. Supreme Court will hear arguments for and against Obama’s 2014 executive actions buffing the Deferred Action for Parental Accountability and the Deferred Action for Childhood Arrivals.

“Republicans’ breathtaking obstruction has perpetuated an utterly broken immigration system that tears families apart, dishonors our values as Americans, and fails to meet the needs of our country,” said House Minority Leader Nancy Pelosi, D-California, and Senate Minority Leader Harry Reid, D-Nevada, in a joint statement. “By and large, we are a nation of immigrants and the vast majority of families who would benefit from these programs include American citizens. We should embrace their contributions.”

The Dems say Obama’s expansion of DAPA and DACA are completely legal, and in line with existing federal law. In fact, they mention Republican President Ronald Reagan expanded protections for immigrants with the 1986 Immigration Reform and Control Act.

The dems aren’t in a strong position though. The suit in question was filed by Texas Gov. Greg Abbott, a Republican who claimed the DAPA and DACA expansions butted in on his executive authority and brought bad financial impacts. Thing is, he won early on at the U.S. District Court for the Southern District of Texas, and again at the U.S Court of Appeal for the Fifth Circuit. Now the expanded guidelines are under a temporary injunction.

The futures of almost 4.9 million undocumented immigrants will be affected by the Supreme Court’s decision, which is expected in June. If that injunction is overturned, then eligible immigrants in the U.S. can get three-year permits to stay in the country.

[image of Obama via Shutterstock]
–