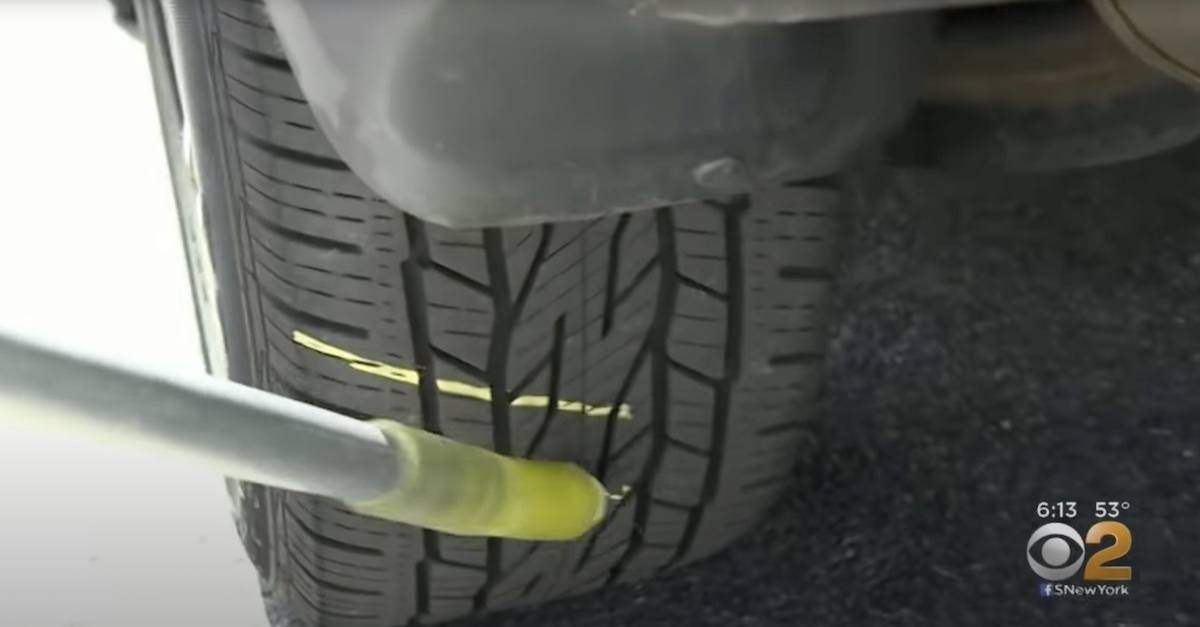 In a ruling that could impact parking tickets across the country, a federal appeals court ruled Wednesday that one city’s policy of “chalking” car tires violates the Fourth Amendment.

Alison Taylor received multiple parking tickets, then fought them all the way to the U.S. Court of Appeals for the Sixth Circuit and won. Like many municipalities, the City of Saganaw, Michigan often marks tires of cars parked in regulated areas with chalk. The practice allows city officials to determine the length of time a particular vehicle remains in a spot. Taylor received several parking tickets after exceeding the downtown time limit. Each ticket noted that Taylor’s vehicle had been marked with chalk and some included photographs.

Taylor filed a civil rights lawsuit under 42 U.S.C. § 1983, alleging that Tabitha Hoskins (the parking officer who issued the tickets) violated Taylor’s Fourth Amendment rights on the grounds that chalking constituted an unreasonable search or seizure.

The three-judge panel of the Sixth Circuit, which included Circuit Judges Joan Larsen and John Nalbandian (both Donald Trump appointees) and Richard Griffin (a George W. Bush appointee) ruled in Taylor’s favor. Writing for the panel, Judge Griffin reasoned that “[b]ecause tire chalking is a search that defendants conducted without an authorizing warrant, it is presumptively unreasonable.”

Griffin ruled that enforcing municipal parking regulations simply does not rise to the level necessary to trigger an exception to Fourth Amendment requirements.

“Unlike the closely regulated industries of liquor sales, firearm dealing, mining, or automobile junkyards,” Judge Griffin wrote, “municipal parking plainly does not ‘pose a clear and significant risk to the public welfare.'”

The city also presented an alternative argument — namely, that it is entitled to an “administrative-search exception” to the Fourth Amendment. Such an exception has been upheld to allow highway checkpoints to curb illegal immigration, check for drunk drivers, and conduct drug-testing. The court, however, wasn’t willing to extend the exception to the context of illegal parking. “[C]ommon-sense commands this conclusion,” wrote Griffin. “[F]or nearly as long as automobiles have parked along city streets, municipalities have found ways to enforce parking regulations without implicating the Fourth Amendment.”

The panel ruled in favor of Tabitha Hoskins, the parking officer, on the issue of qualified immunity. Because not every reasonable parking officer would have known that suspicionless chalking of car tires violates the Fourth Amendment, reasoned the court, Hoskins is entitled to qualified immunity and is not personally liable for the Fourth Amendment violation.

“For these reasons, we affirm the district court’s grant of summary judgment in favor of Hoskins, reverse regarding the City, and remand for further proceedings consistent with this opinion,” the panel concluded.

Taylor’s lawyer Matthew Gronda said in a statement to Law&Crime that, “[f]or the second time in this case, the Sixth Circuit has confirmed that tire chalking is a search under the Fourth Amendment.”

“Ms. Taylor started this case nearly five years ago. She believed then, and still does now, that it is her civic duty to fight against infringement of constitutional rights in whatever form and wherever it exists,” Gronda said. “Thanks to the determination of this one person, the protections of the Fourth Amendment are stronger and clearer for all.”