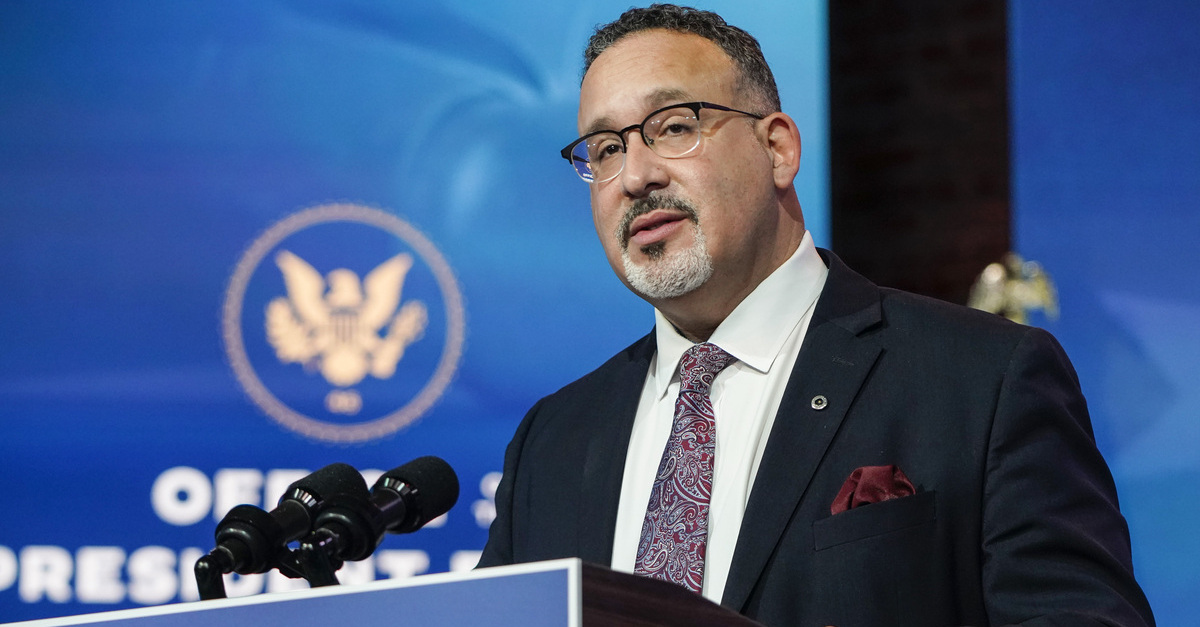 The Department of Education (DOE) has announced a series of proposed regulations that amount to an about-face for a student loan policy for which former Secretary Betsy DeVos had been harshly criticized.

The DOE, led by Joe Biden‘s pick for Education Secretary Miguel Cardona, made the announcement on July 6.

The “Borrower Defense Rule” was adopted by the DOE in 2016 after several high-profile for-profit schools (including Trump University) came under scrutiny for defrauding students on a mass scale. Students who are successful in their borrower defense claims will have their loans forgiven; thereafter, the federal government can seek reimbursement of unpaid loans directly from the offending school.

DeVos, the embattled DOE Secretary under former President Donald Trump, refused to commit to enforcing borrower defense and other anti-fraud rules at her confirmation hearing. She later scaled back loan forgiveness opportunities for students and in 2019 issued her own version of the rule, one that made it significantly more difficult for borrows to get loan forgiveness based on claims of fraud.

DeVos also found herself embroiled in litigation and eventually a costly contempt citation for her mismanagement of the Education Department.

Under the 2019 regulation, students alleging fraud were required to prove that they could not get a post-graduation job for non-economic reasons, and were required to provide documentation of their employment searches. By contrast, the Biden administration’s new proposed regulations relax some of the requirements for students who allege that they have been swindled by so-called diploma-mills.

Key to the DOE’s proposal is its expansion of the scope of borrower defense claims; the new rules would allow claims on grounds of substantial misrepresentation, breach of contract, and aggressive or deceptive recruitment, among other things. In its regulatory proposal, the DOE said that it “does not believe it is reasonable for a borrower to have to act as a labor economist to show they were harmed by an institution’s misrepresentations.”

In addition to widening the grounds for borrower defense claims, the DOE also proposes a regulation whereby borrowers will be ensured their day in court by prohibiting colleges from requiring borrowers to sign mandatory pre-dispute arbitration agreements or class-action waivers. Furthermore, the proposed regulations would limit interest capitalization and create additional means for debt-discharge such as permanent disability.

Under prior regulations, the DOE was authorized to recoup costs in borrower-defense cases, but rarely if ever actually did so.  The primary difficulty is that colleges deemed to be predatory (such as DeVry or Corinthian) often close their doors and file for bankruptcy before the DOE can seek reimbursement. To combat this predictable problem, the proposed regulations create a formal process for the DOE to recover funds in borrower defense cases.

James Kvaal, Biden’s Under Secretary of Education, said in a statement that “borrowers have had to navigate narrow rules and a needlessly complicated system.”

“What’s worse, borrowers whose schools lied to them can’t pursue litigation because restrictive and unfair arbitration requirements and class action bans were foisted on them by their colleges,” his statement also said. These borrowers, Kvaal said, “should not have to jump through hoops to get the relief they deserve.” Rather, the DOE’s proposed regulations “would remove many of those barriers and help create a federal student loan system that works better for borrowers.”

“We are committed to fixing a broken system,” Cardona said about the new plan, pledging that “[t]he Biden-Harris Administration is determined to build a more accessible, affordable, and accountable student loan system. These proposed regulations will protect borrowers and save them time, money, and frustration, and will hold their colleges responsible for wrongdoing.”