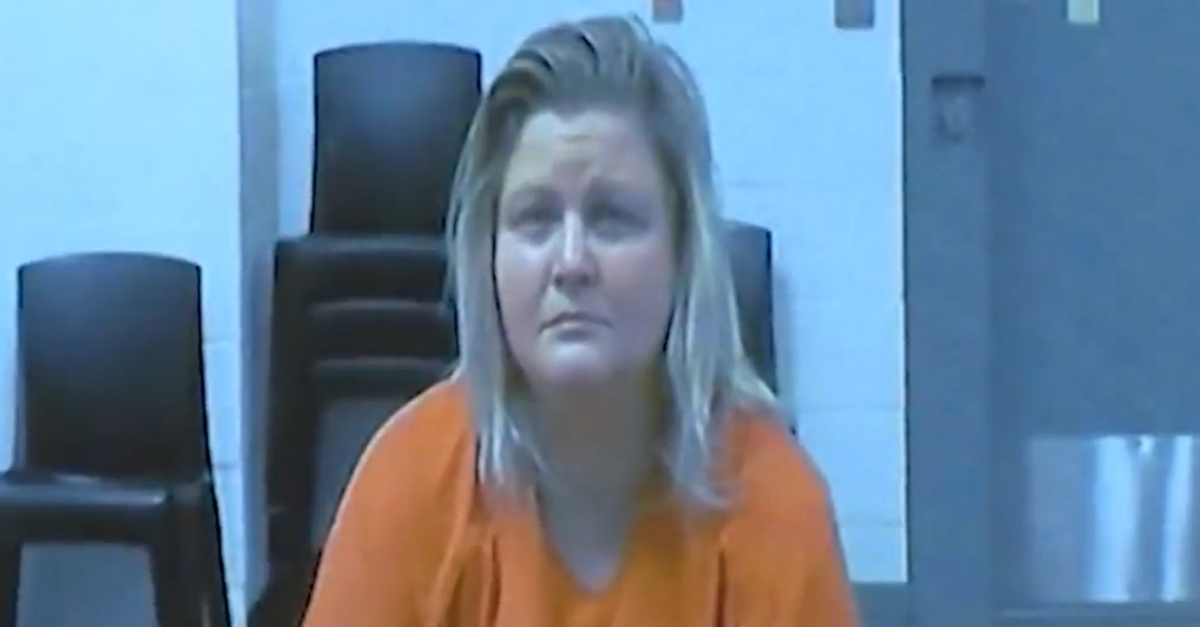 Nichole Rice in a previous hearing.

The woman accused of murdering her roommate has pleaded not guilty. Judge Richard Hager determined there was probable cause that Nichole Erin Rice, then 19, stabbed Anita Knutson, 18, at their apartment in early June 2007 and left her face down in bed, according to The Form of Fargo-Moorhead.

As previously reported, the victim’s father Gordon Knutson found her dead on June 4, 2007 after she did not respond to her mother’s phone calls for several days. He got help from the landlord and a maintenance worker to enter the residence.

The case went unsolved for years, but authorities in Minot, North Dakota, finally arrested Rice in March after reevaluating the available evidence the case.

Judging by testimony from Minot Police Detective Mikali Talbott, Knutson and Rice had vastly different reputations. Friends described the victim as kind, friendly, and likable, he said, according to InForum. On the other hand, Rice was hot-tempered and reactionary. That temperament factored into their relationship. Friends said Rice was “super jealous” of Knutson and called her derogatory names, according to Talbott’s testimony. In the month before she died, Knutson had her father install a lock on her bedroom door because she did not safe without it, he said.

Prosecutors believe she died some time on June 2 or 3, 2007. Wearing just a pink bathrobe, she had only two stab wounds to her chest. There was a pocketknife with dried blood near her bedroom window.

***UPDATE*** Arrest has been made in connection to the death of Anita Knutson. Details will be addressed during a live press conference held today at 4:30 PM. https://t.co/RF1CIH9As6 pic.twitter.com/WXH1OQA7zt

Rice attorney Philip Becher suggested an alternate suspect: a Montana man arrested on June 11, 2007 for burglarizing a home while armed with a knife. He resembled the description of a man reportedly seen running near the crime scene of the morning of June 3, 2007. Talbott, however, testified the man was seen on video arriving in Minot on the evening of June 3, not the day before, which is what the defense claimed had happened.

Though the screen window to the bedroom was sliced open, authorities argued that Knutson did not die in a burglary. Nothing was missing from the apartment she shared with Rice. Items under the window were not disturbed, Talbott testified. He suggested the suspect entered through the locked front door. Only Knutson, Rice, the landlord and a maintenance worker had a key to the apartment.

A Minot Police detective testified for more than an hour Thursday morning at Nichole Rice’s preliminary hearing, on DNA testing of the murder weapon, to Nichole’s actions in the days around Anita’s death, to other suspects considered in the investigation. https://t.co/7fyRVazDwT

Authorities also said that Rice’s ex-boyfriend also told them Rice confessed to committing the crime. That conversation occurred after the couple went to a party where Knutson’s death was discussed, according to an affidavit obtained by The Washington Post. Rice allegedly became “belligerently drunk” and told her then-boyfriend she “did it.” He said that when he brought it up later when she sobered up, she angrily rejected his questions.

According to court records, Rice is charged with a subsection of murder that involves “[i]ntentionally or knowingly caus[ing] the death of another human being,” a class AA felony.